It was in the upscale Aoyama district of central Tokyo that we attended MEME‘s oneman live. Announced at the end of 2019, the solo project of L, former vocalist of the band Balalaika, begins a series of oneman lives  in Tokyo, starting with the Aoyama RiZm venue this September 21st. Inside the room, the ambient music is punctuated with breathing sounds, and the neon lights in the room create an electric and almost gloomy atmosphere.

The intro starts and the curtain rises, as “Unknown” begins. L makes his entrance in the half-light, using a simple portable light that he projects in front of the audience. Among the fans, some are also equipped with lamps which they use during their furitsuke, reinforcing the solemn climate of this live’s beginning. The session members appear just as invested as the singer, the rhythm from the beginning of the live show is energetic. L punctuates instrumental parts by asking the public to unleash their energy.

The guitar riffs of “Purugatorio” (プルガロトリオ) begin. The vocalist performs theatrical, almost dance-like movements to the powerful, dark rhythm of the melody. He sprinkles the song with hysterical laughter, accentuating the manic nature of his gestures.

During “Viola stigma” (“ヴィオラstigma“), the fans get fired up as L repeats the multiple “Discipline spanking” lyrics.

“This is love song” then follows, lyrics repeated almost tirelessly throughout the song. The vocalist appears to hold one of these traditional sunshade, that he twirls around, while his red half-skirt follows his movements. 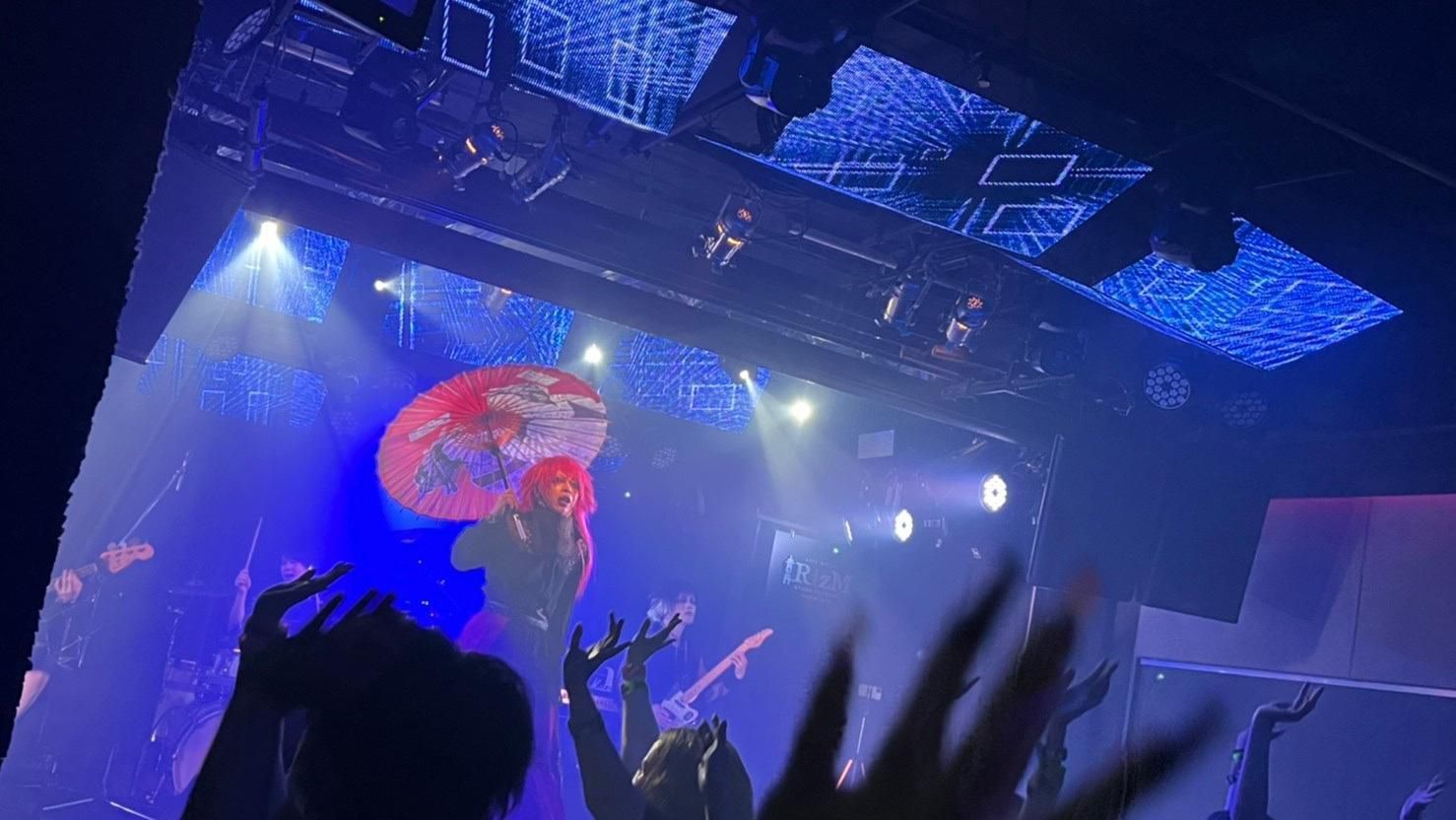 Apart from a few whispered words throughout the song, “This is love song” has almost no lyrics, and is the kind of anthem that can be felt and appreciated during concerts much more than on the CD. The audience is in a trance and the fans headbang during almost the entire song. During “Friday the 13th“, we see for the first time the L’s stage persona slipping: until then dark and sinister, he can’t help but smile at the enthusiasm of his bangya. The song ends, with all the fans raising their middle fingers in the air, part of the furitsuke.

“Twilight” begins with the sound of fans clapping their hands. The drums are powerful and the melody is catchy. It feels like tension has been released, and L points to the fans even in the back of the room, encouraging them to come forward.

“Are you giving up your humanity?” are repeated several times between songs, and the theme of humanism (human being in all forms, and conversely inhumanity) seems to be L‘s predilection theme this time. When listening to MEME‘s discography one can’t help but feel nostalgic, the sounds and influences being reminiscent of a darker and conceptually more hardcore visual kei.

During the interlude, an alarm rings, and a disco ball projects blue lights across the room. The ballad “Born to be Free” begins with a sound of flowing water. The verses are half whispered and sung, and L‘s gestures are slower. The lightning effects intensify the song’s lyrics, “the violent rain absorbs everything” (激しい雨が濡らしていく), and the azure lights almost immerses us under an invisible torrent. 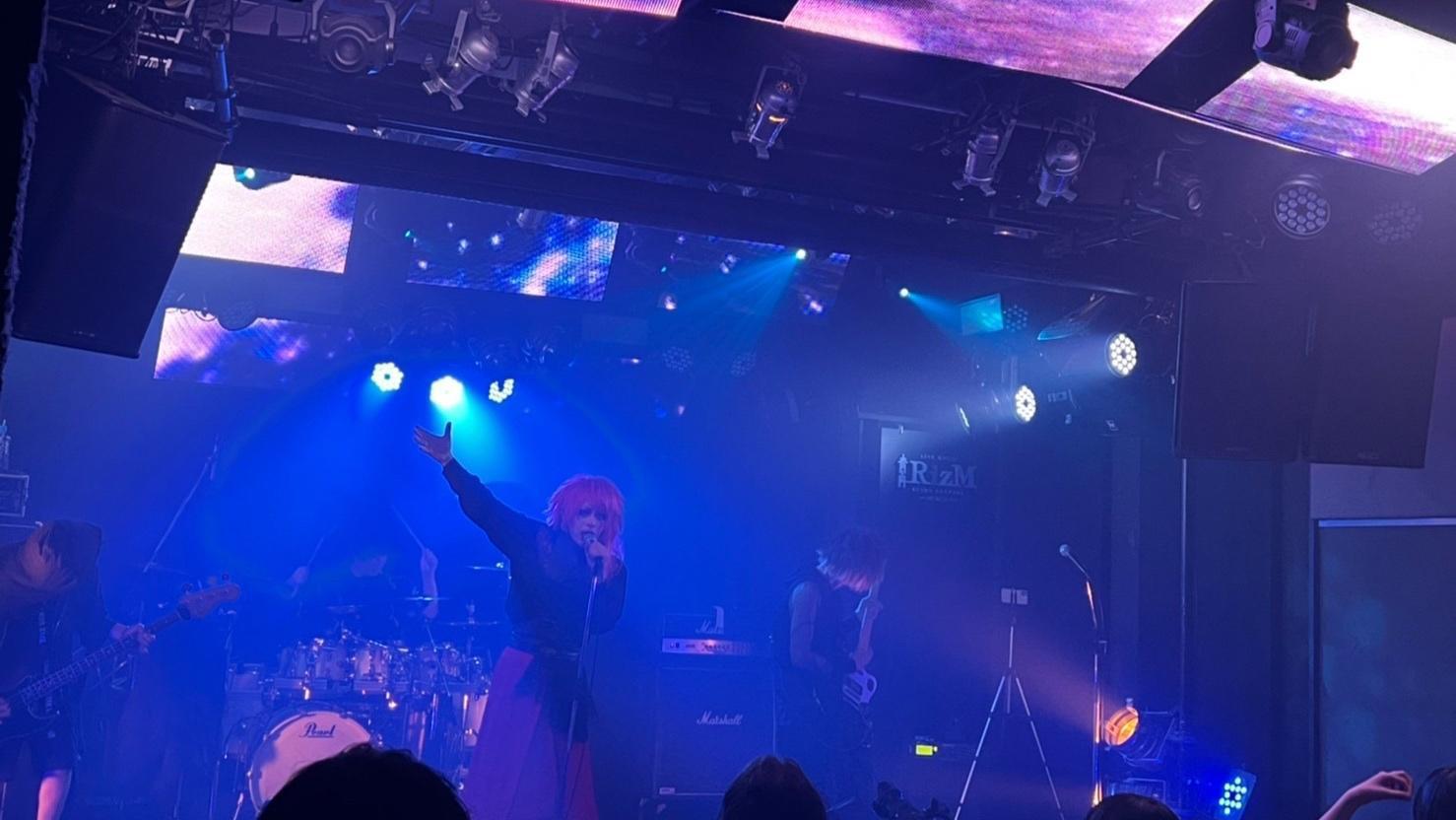 “Yokujou Shangurira” (“欲情シャングリラ“) is definitely one of our favorites of MEME‘s setlist. On this song, L‘s voice shows a lot more depth and power, and the guitar solo is also spectacular.

During “Hyakkiyagyou” (“百鬼夜行“) the singer opens his umbrella again, swinging it over his shoulder with grace. 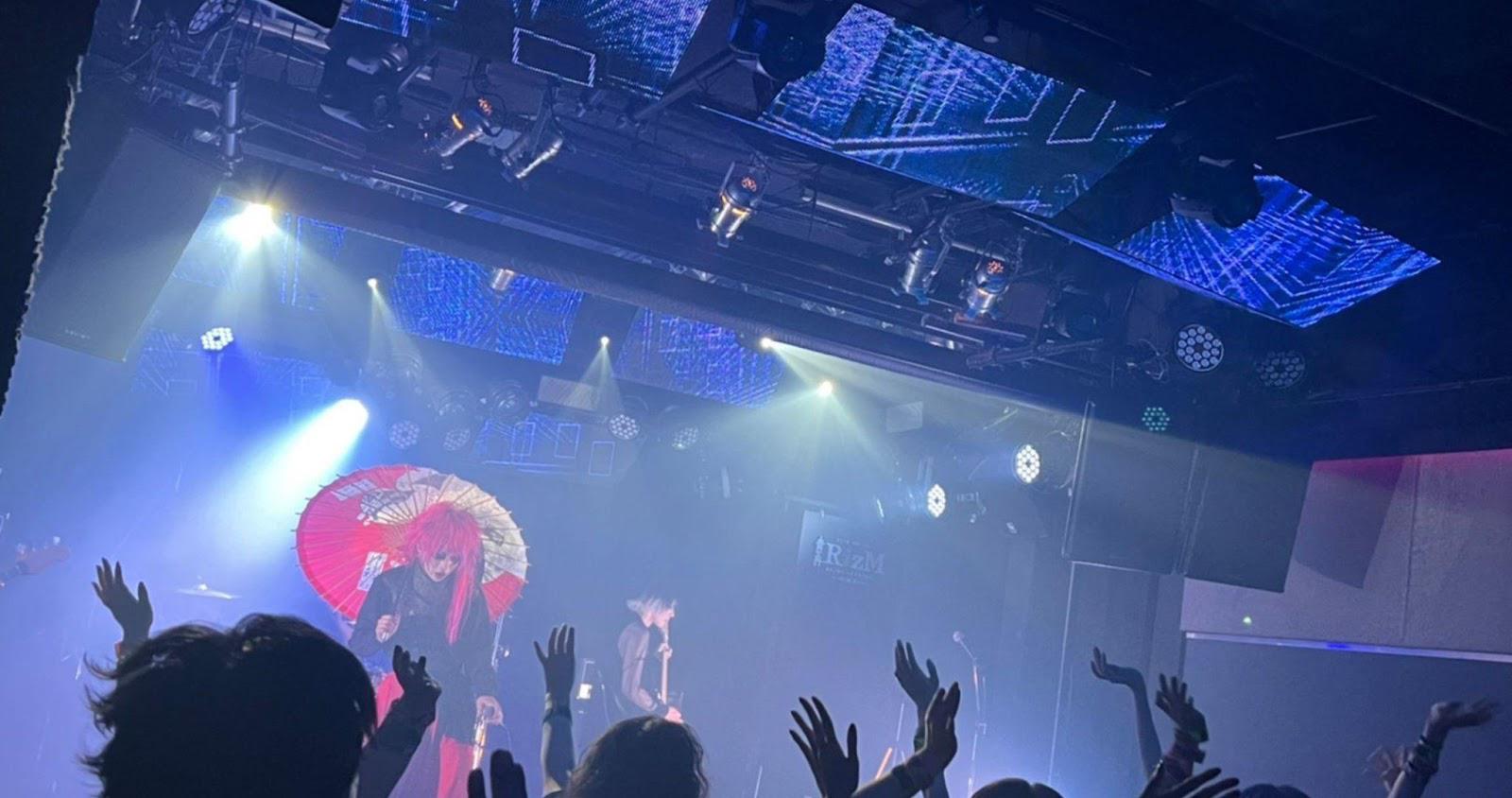 The tension of the song is frenetic and does not decrease when the band starts “Thanatos“, first track of the mini-album released this year CERCA TROVA. The fans are trying to hide their exhaustion, while L is going wild and falling to the ground.

The sounds of camera shutters ring out when “Night Crawler” kicks off. The vocalist confronts his audience in a more direct manner and points his finger at his audience multiple times while repeating hysterical laughter.

With “DIABOLIC“, L takes the audience into a more danceable and festive atmosphere. Although he performed with an almost religious fervor, the singer’s impulsiveness and intensity seemed to rise in crescendo. It seems impossible to guess L‘s next move, sometimes swaying lasciviously, sometimes wriggling like a puppet.

He doesn’t fail to warm up his audience as the set nears its end, for a final sprint. “In My Blood” opens with one of the most amazing growls of the show, and the song definitely stands as one of the most violent and effective tracks of the show. L has fun like a conductor to slow down the rhythm of the melody, forcing the bangya to tune their furitsuke. This song appears in the lineage of songs such as “This is love song“, which are the songs to be experimented live before all. The song ends on a last chorus’ round, this time with a frantic drum beat, close to power metal rhythms. 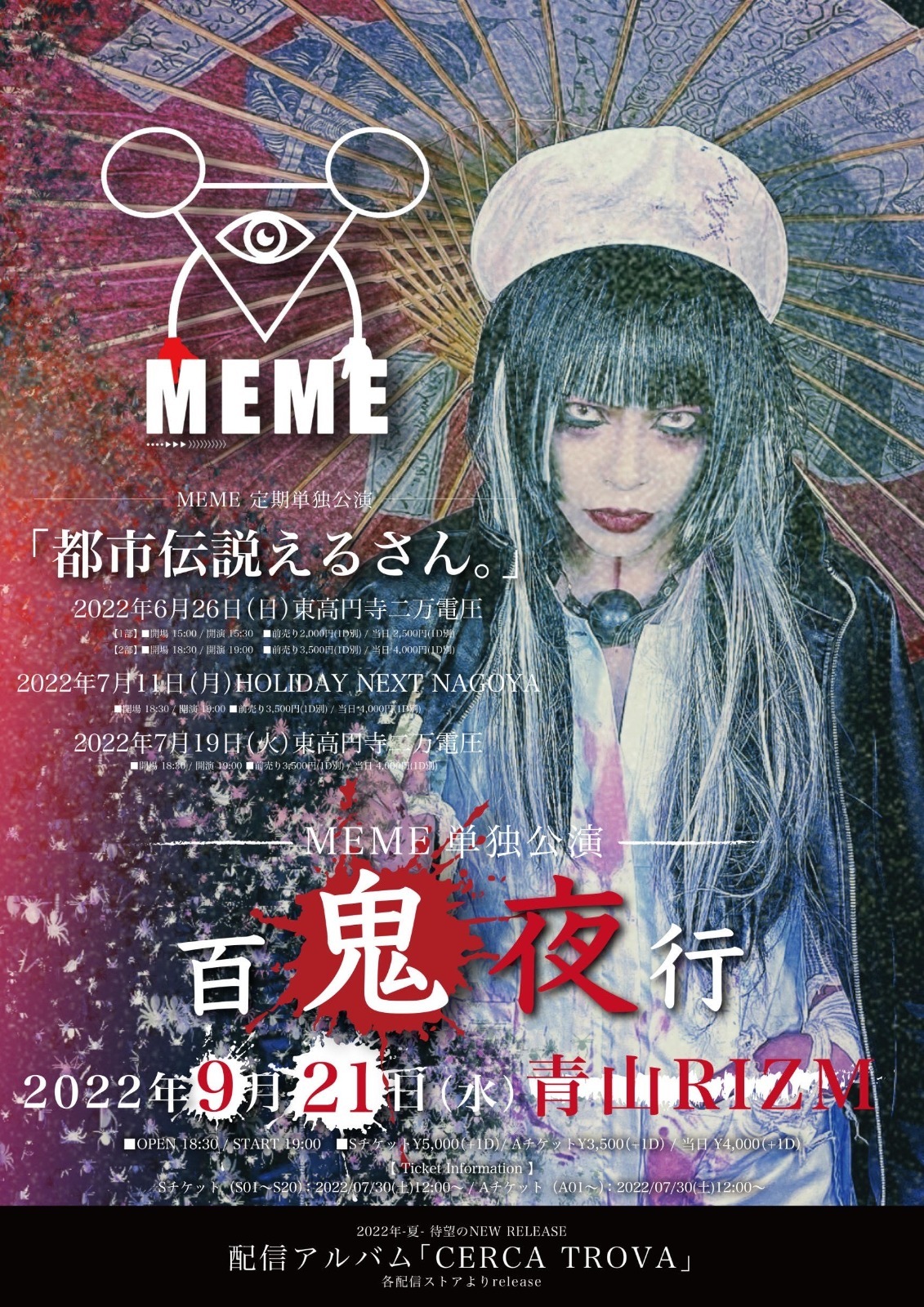 When L announces that the last song is about to be performed, the audience does not fail to raise their hands with excitement, ready to give their whole energy before the end of the show. He keeps asking his audience if they are alive or dead, looking for the remaining humanity suggested at the beginning of the show.

“MANTORA” starts and the lighting in the room becomes multicolored. The melody is catchy and the singer plays with his audience before putting on a gas mask and hanging the cable of his microphone around his neck. He leaves the stage first and it is only at the very end of the song that the audience applauds with enthusiasm. 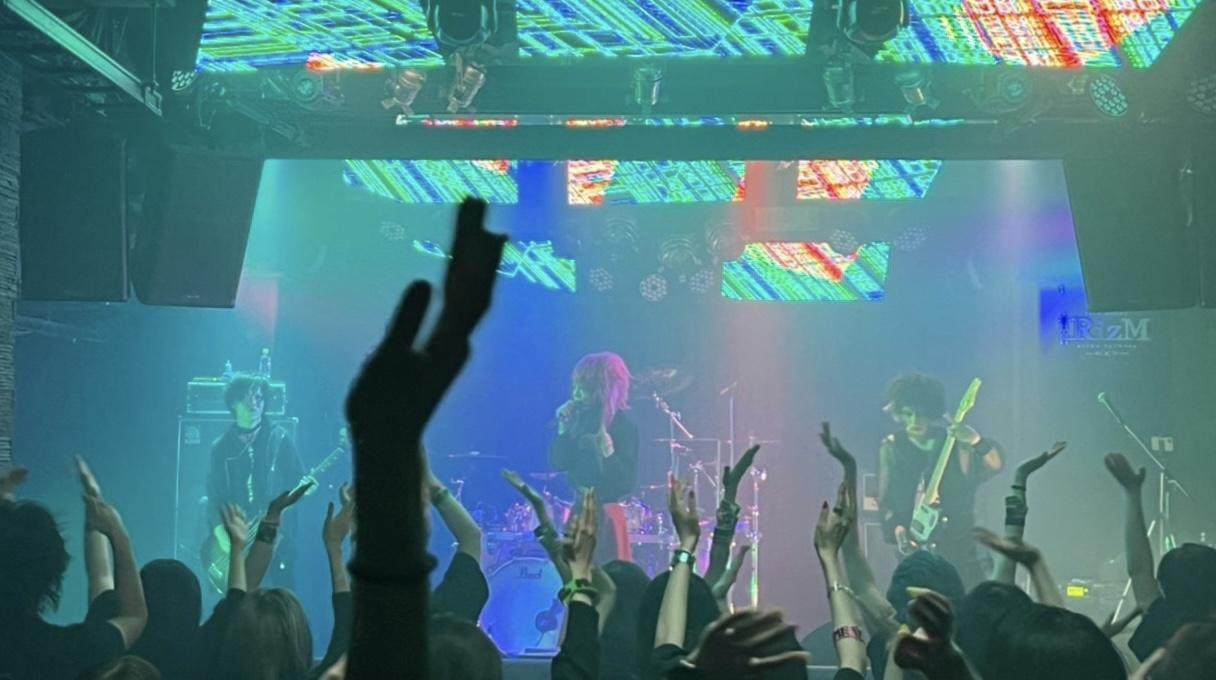 As the curtains close, the fans clap their hands in rhythm to ask for an encore. The fans take the opportunity to take a break, but this one is short-lived.

When the band returns to the stage, L asks the audience if they are exhausted (to which very few hands dare to raise shyly). Surprised by the heat in the room, the singer jokingly threatens his support guitarist with a 100 yen coin if he doesn’t show more energy.

During this MC, L briefly discusses the concept of the abandonment of mankind, the theme of this live set (“Humanity down the drain”, which he refers to in Japanese as “人間をやめる”). The setlist of the show seems to make sense when he explains that the goal is to wipe the slate clean of his sorrows and clear his mind, because after all: isn’t it easier to live carefree?

L presents himself as a determined singer, and does not fail to thank his audience several times. He honestly claims his desire to progress and create more impressive performances, promising his fans that he won’t stop as long as they answer the call.

He asks his session members if they want to add a word, and they are much more shy than during the rest of the show, where the band appeared as an official line-up.

The singer then takes a more solemn posture to announce that he will perform on New Year’s Eve, December 31 in Nagoya Ell. Fits All. The announcement of a final date to finish his series of concerts does not fail to reign a heavy atmosphere in the room, the fans cooled at the agreement of the word “final”. The atmosphere is quickly relaxed when the singer smiles and reassures his fans that this is only the last date of the year and does not ensure any major turning point, if only the promise to persevere and progress.

After this brief speech, he calls for fans to have fun and then begins “KojiinR&B” (“孤児院R&B“). This sound is more pop rock and the audience appears casual but still passionate. Finally, the band chooses to close the show by covering “In My Blood” a second time, and the atmosphere is boiling in the room. “Are you finally going to stop being human?” asks L, not hesitating to signal his audience to headbang with fervor. It is pleasing to see that the singer not only solicits his fans to participate with exaltation, but takes by himself to the euphoria by jumping and doing headbangs.

He repeats the refrain several times, the lights flash in the room accentuating the intensity of the song before a climax where L tells us that he is finally “dead”, after having let his humanity disappear.

He leaves the stage under the cheerful applause of the public before the curtain closes.
The show offered by L and his band MEME left us stunned by its energy and emotions: raw, violent and full of sensitivity. 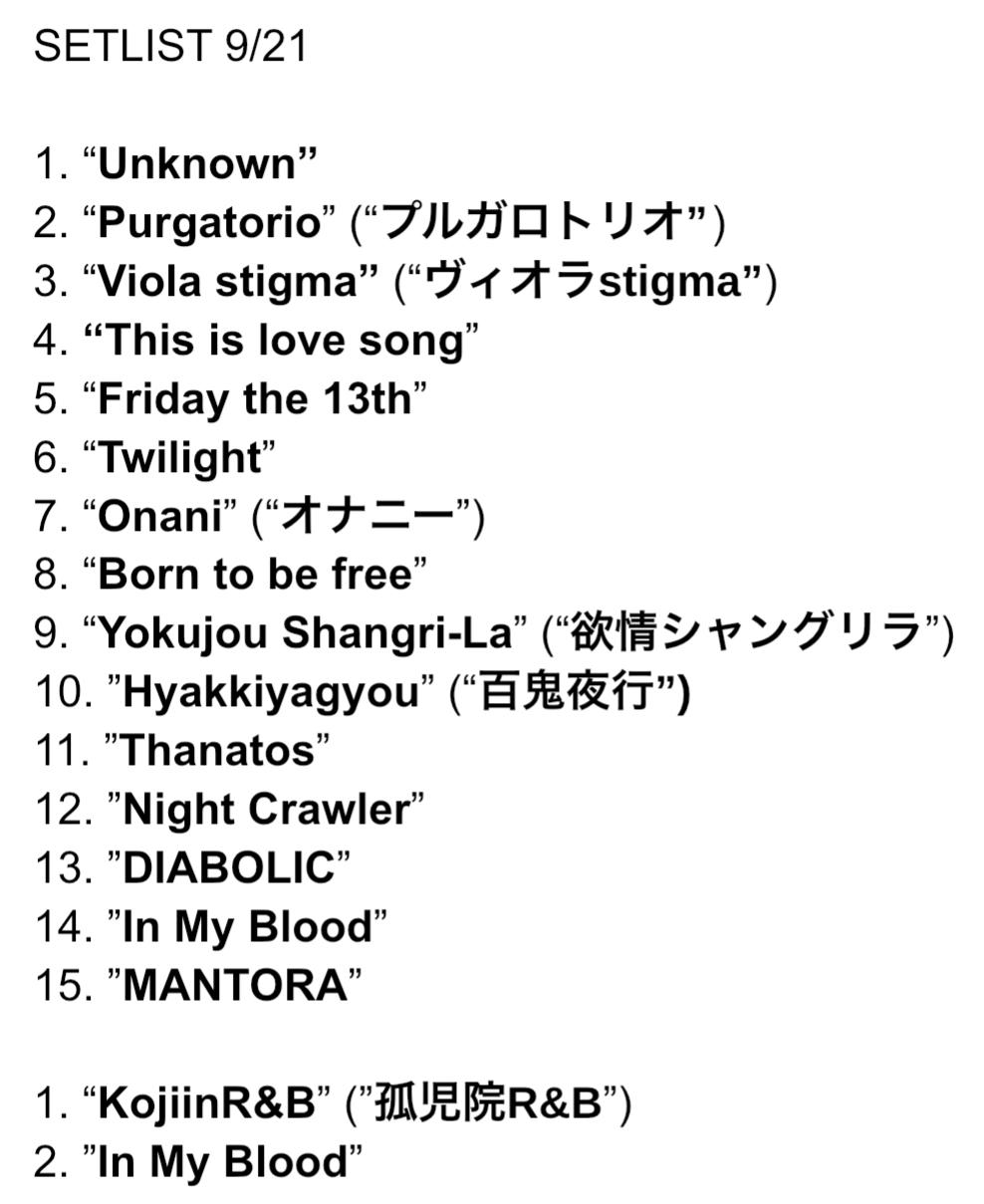