That’s how we felt back when we heard that the legendary Nagoya band deadman would stand on stage again, 13 years after their disbandment.

The band has gathered an important fanbase not only around the country but also in other parts of the world, such as Europe where the original lineup had performed two dates in 2006, respectively in France and in Germany, before dissolving that same year.

Although the band’s lineup had changed, fans around the world could not believe it when beloved vocalist Maco announced his return to the stage to perform songs from their discography alongside former partner-in-crime and genius guitarist Aie.

Until now, the band, accompanied by their trusted support members, had toured the Kanto area as well as their home turf Nagoya and metropolis Osaka, entertaining new and long-time fans with their intemporal classics. What a surprise it was when they announced the release of “I am here”, an album of newly recorded fan-picked songs, with a brand-new song, the first in more than a decade. The prospect of hearing the new track live for the first time had us shaking with excitement. 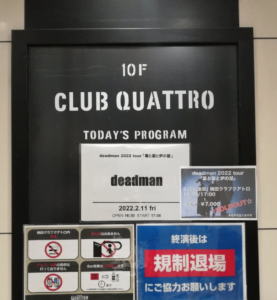 The performance was meant to be the last date of the 3-stop tour “Doku to Kusuri to Ro no Nezumi” ( Poison, Drugs, and Nuclear Rats), the follow-up tour for their album, which had started the previous month in Nagoya. It was to be held at Umeda Club Quattro, a conveniently-placed venue with a capacity of 700 people, where the band had also played back in the summer of the previous year.

The streets of Umeda, Osaka were bustling on the day of February 11th, as it was National Foundation Day, an annual holiday in Japan. As we approached our destination and stood across the street waiting for the light to turn green, we couldn’t help but notice the flock of people dressed in black from head to toe standing in front of the venue. This is a common sight when attending performances of bands in the scene. To the novice eye, this view might be intimidating but as we got closer, all we could see were excited fans happily buzzing around the entrance, taking pictures of the livehouse’s signboard with busy hands full of merch.

The door opened at 4:30. During these times, for precaution, a lot of bands opt for seated performances. We took a seat and waited for the performance to start. The stage curtains were completely pulled to the side, revealing all the instruments in their original setup. Right in the center of the stage stood a three-panel plastic screen, eerily basking in purple and blue light. Anyone familiar with the band knows that Maco’s creative use of props is only one of the few things that make them so unique. The show had not even started but we were already getting a glimpse of what was to come.

A few minutes after 5:00, the lights turn off, signaling the start and everyone in the room stands up at once. Guitarist Aie and support members bassist Kazu (ex. Kagerou, currently playing alongside Aie in the god and death stars) and drummer Asanao (lynch.) appear on the stage, walking calmly to their respective spots. With Maco still nowhere to be seen, Aie and Kazu, strumming on their instruments, turn their back to the audience and stand on both sides of Asanao’s drumset, making a triangle formation. The trio plays energetically, showing amazing chemistry as they challenge each other with grins on their faces. The floor shakes as their jam session goes on for a few minutes and suddenly the triangle starts opening up and Maco finally walks onto the stage and opens with “Himawari” (Sunflower). 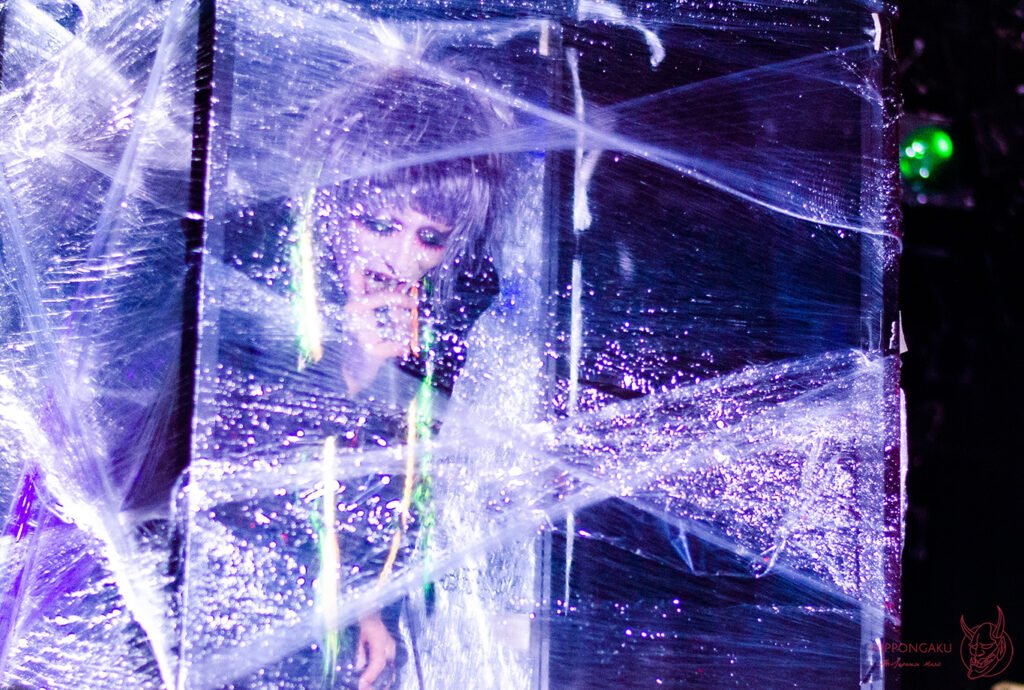 Through the plastic facade we can see that Maco looks frightened while singing, like he is really trapped inside a cage. During “quo vadis”, he falls to his knees and we can’t help but feel suffocated watching him push his arms against the “walls”, like he’s fighting against something we can’t quite see. As the performance progresses, Maco finally pierces through the screen and it feels like we can finally breathe. He greets us for the first time “Welcome!” (in English). 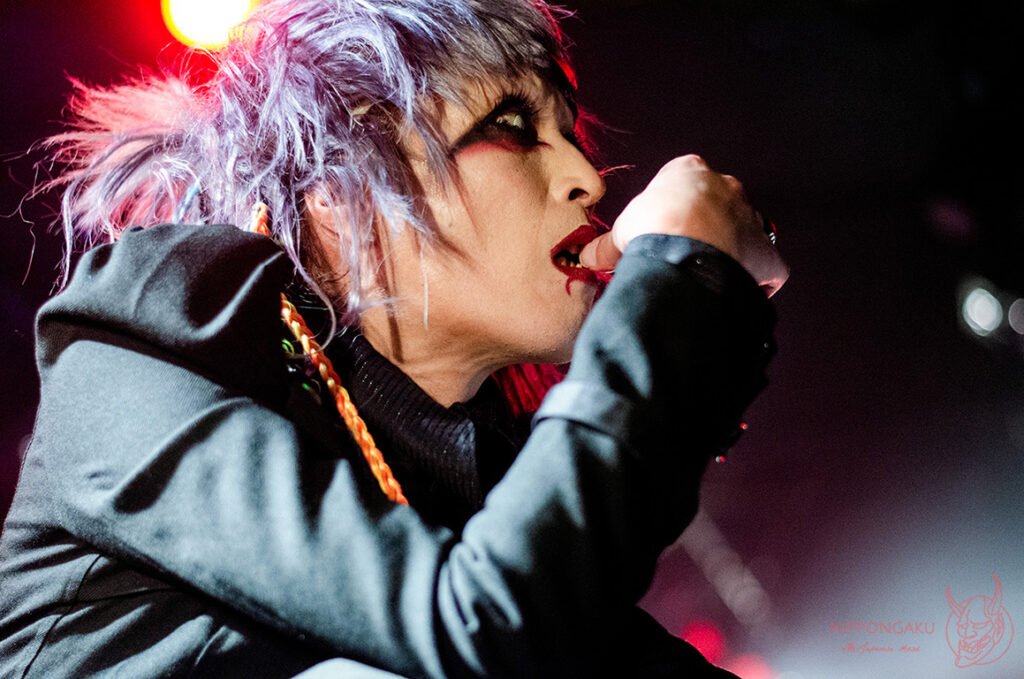 Hearing classic songs feels amazing but there is something fresh about hearing them performed live in 2022. There is a sound that can’t quite be captured on recording and we believe Kazu and Asanao’s own flairs are part of the reason why. It is truly unique to be able to appreciate the original songs, the re-recorded versions as well as the sound that can only be produced when these four people stand together on stage. 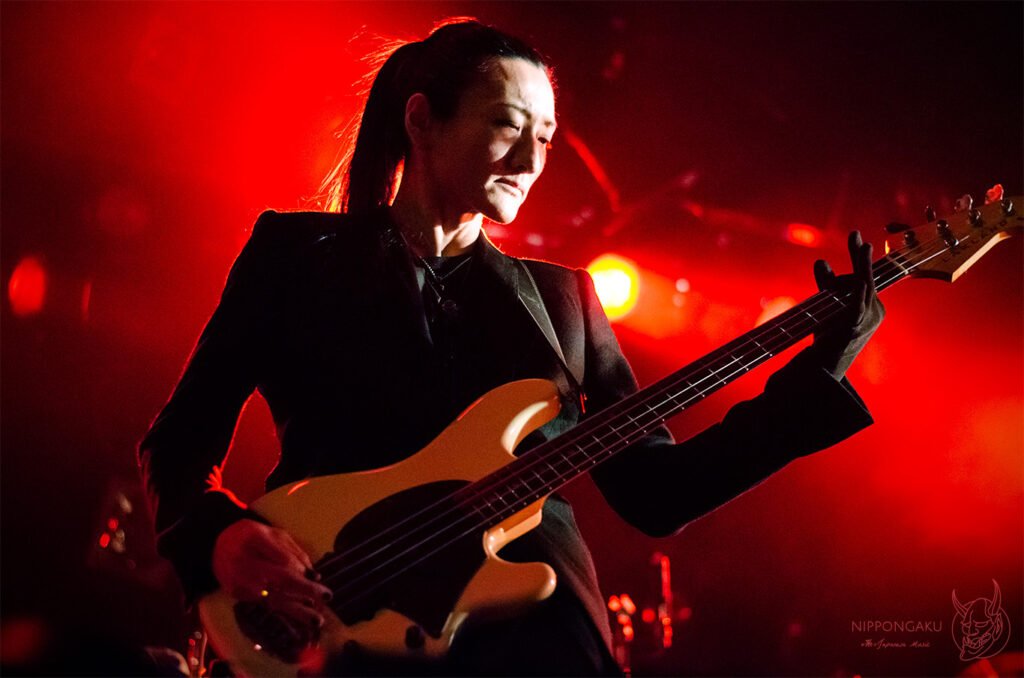 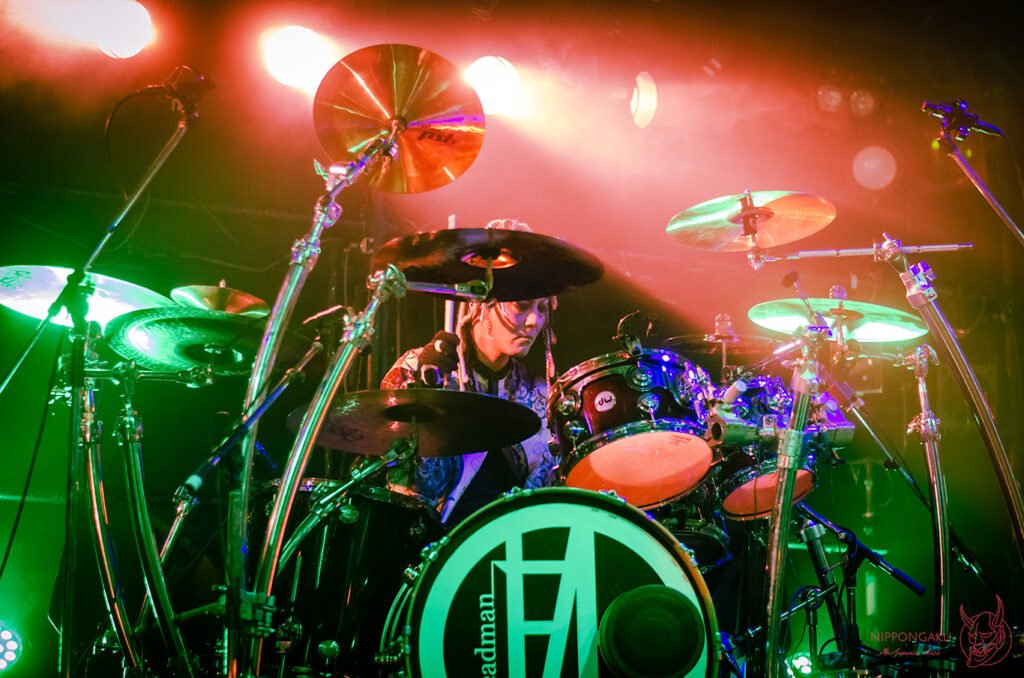 We observe the audience during certain songs. It’s easy to see at first glance; the supporters are from all walks of life. People of all ages stand in the room with only their appreciation for the band’s musical universe as a common denominator. In such a varied audience, there is no one way to enjoy the show. Some people enjoy the music with their body, headbanging along to the hard riffs and doing furitsuke while others stand there with their arms crossed and eyes closed, listening carefully and bobbing their heads to the beat. It’s a free, relaxed environment where people are invited to connect to the music in their very own way.

We must say deadman could not be without Aie’s catchy riffs and smooth back vocals, making each song sound fuller. The contrast between Maco’s goth attire and Aie’s relaxed silhouette feels somehow complementary. While Maco embodies a more theatrical style of performance, Aie remains mostly in the same spot but his confident playing ranges from aggressive and intimidating to slow and melancholic, adding further depth to the songs. 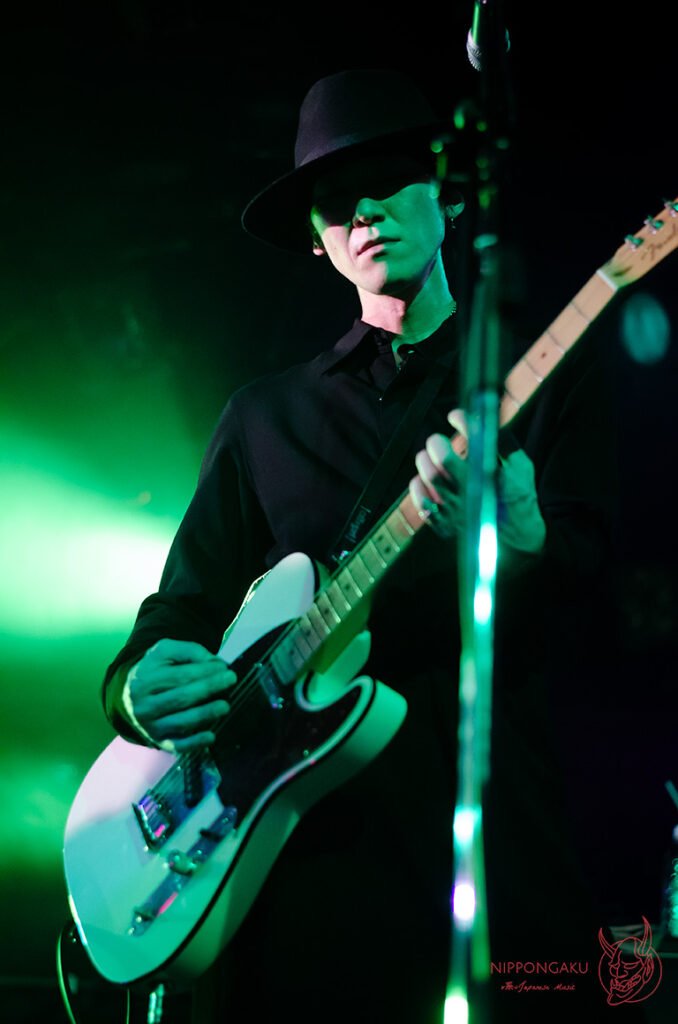 Throughout the set, vocalist Maco utilizes props and body language brilliantly. He twitches, moves around like a puppet and makes use of props to show us what’s really happening in his character’s head. It’s difficult to look away from him as he tells stories of goodbyes and broken promises. 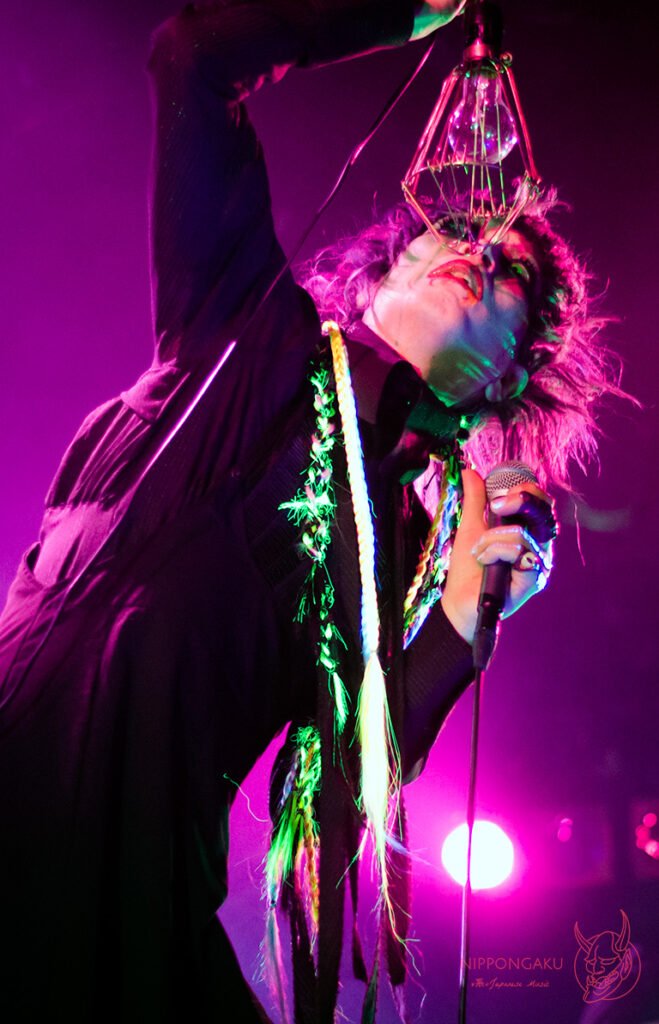 It is at the mid-point of the performance that we get to hear slower, more emotional songs like “ドリスからの手紙” (A letter from Doris) or the iconic “this day. this rain”. That’s also when we get to see more of Maco’s talent at conveying emotions. He looks around, looking lost and kicks the air, like he’s trying to protect himself. By the time “Taion”(Body Temperature) starts, he looks like has almost entirely retreated into himself and he seems lonely as he puts the microphone stand away. From where we stand, Maco looks like a lost child and we must remind ourselves that this is just a performance. A great one, at that. 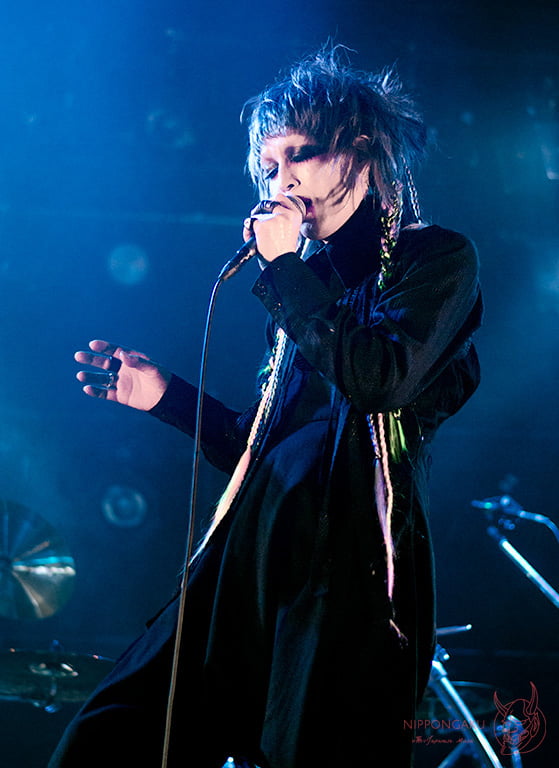 MCs are kept short and sweet, with Maco calling us “兄弟” or siblings, the affectionate name they use to call their fans. He then introduces all the members and fans cheer for them by applauding them as loud as they can. Aie introduces Maco, who waves shyly at the audience, and they all laugh. The members are all friendly to each other and they all seem to be having fun, which in return makes us appreciate the moment we’re sharing together even more. 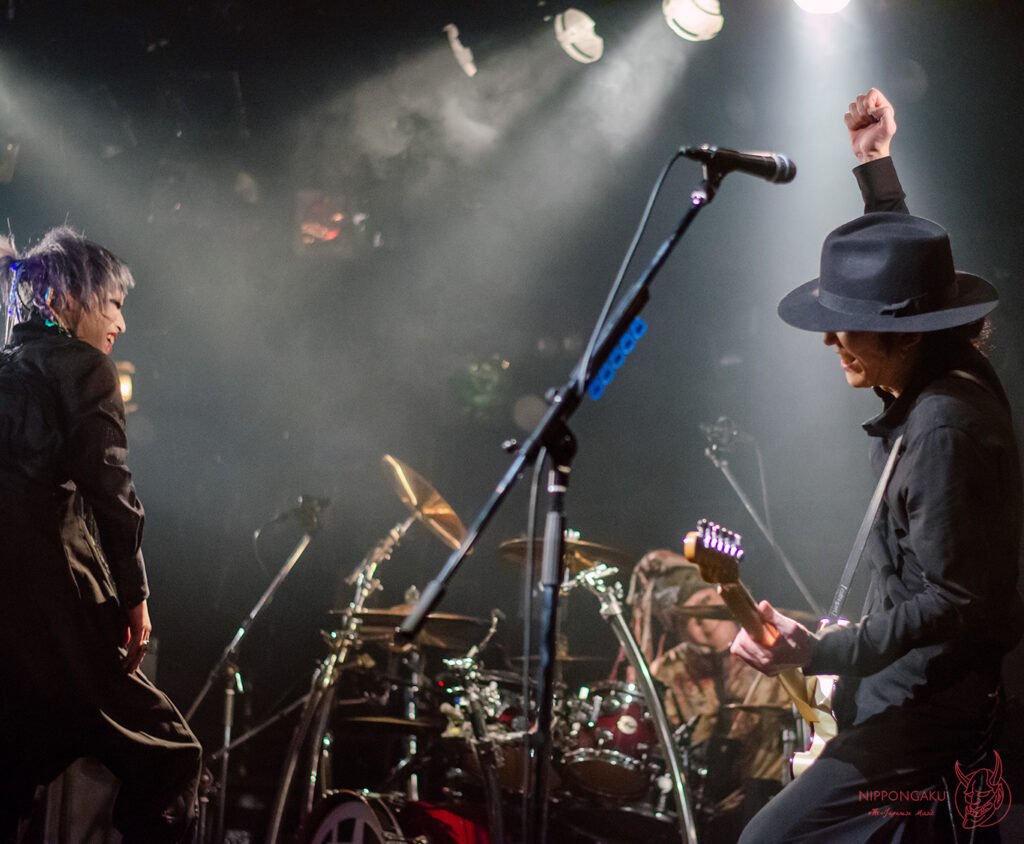 When they come back for the encore, Aie is mainly in charge of speaking. He unfolds his memo sheet slowly, with a mischievous grin on his lips which makes a few fans giggle. He thanks everyone for a series of sold out shows and announces their next one.

Their next show entitled “endroll 2006/endroll 2022” will be held at Tokyo Spotify O-EAST on May 23rd (the day of their disbandment) later this year. He explains that it will be a taiban (event with more than one band) where the original deadman lineup will compete against the current one. Fans jump from excitement of getting a chance to see the songs performed again by the former members, after their surprise appearance at an event last December. 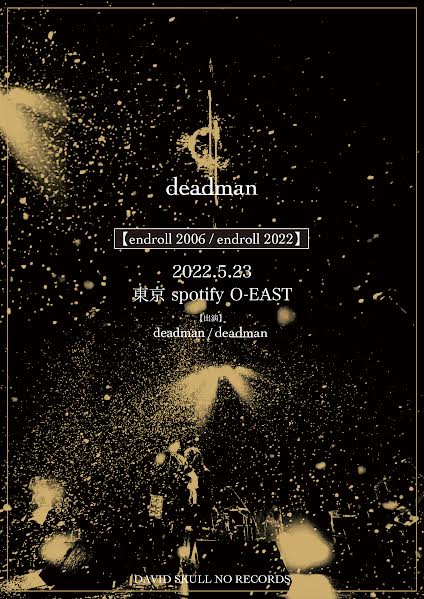 After a short encore, the members put their musician faces back on. A few notes in and we realize this is their brandnew song “Kane ha naru” (The Bell Tolls). The audience, usually quite active, doesn’t move much and everyone listens carefully to the song. The song is a modern take on deadman and it fits right in with the rest of the songs. There is something happy about this song and fans sway from left to right along to the chorus. In this moment, deadman being back feels very real and we can feel that everyone in the room, including the members, is grateful to be able to experience it.

As the end approaches, the room becomes entirely dark. There is an eerie atmosphere as the members disappear in the darkness and “Arizuka” (Anthill) starts playing. Maco walks towards the front of the stage and we hold our breaths. Behind the faint black light, all we can see are his bright green eyes and hair glow in the dark. As he starts singing, neon drool slips from behind his lips and stains his blouse. He keeps singing, moving in quick strides and stopping every so often to stare into the audience while rubbing his stained hands on his face and body. The performance ends after he coughs neon blood and looks down for the last time before walking out. The audience, still entranced, waits a brief moment before applauding them for the last time of the night.

Even with the promise of another concert in May, we can’t help but wonder what deadman has planned for the future. After such a performance, all we can hope for is more opportunities for fans to witness the creative ways in which they have been conveying their unique universe since 2000. deadman is here and we’re so glad to see it.
deadman’s latest album “I am here” is available on Spotify and Apple Music.

Next week, we will have the chance to sit down for an interview with the members of deadman.
Do you have any questions for them? Leave them in the comment section below! 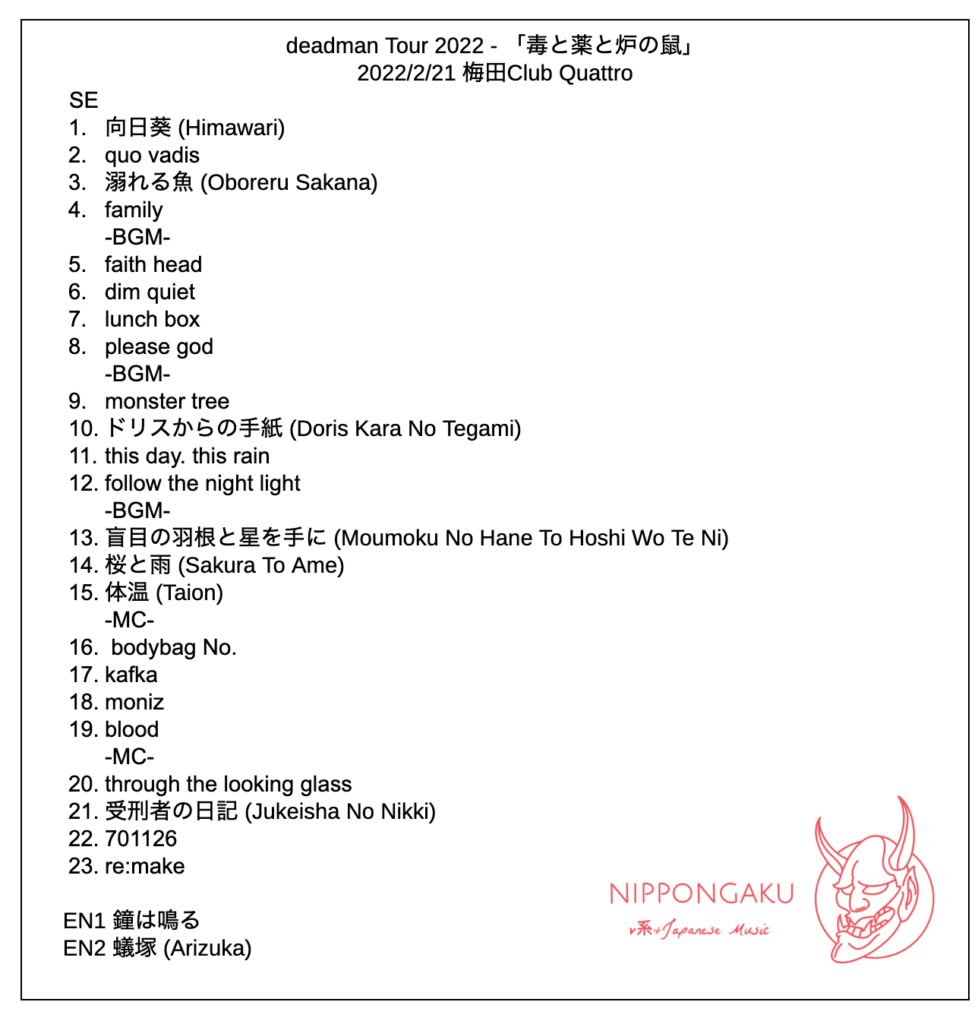