First of all, this concert has a special meaning for us, as it was the official premiere of Nippongaku in the press area. This was for their 2021 tour final titled “5 Layer Tower. Gozō Roppu ” in OSAKA.
SURPRISE of all, debut of the new single and presentation of its corresponding MV (music video).


Shellmy originated in Osaka in 2013. People often associate them to the menhera movement in Japan, because of both the nature of their songs’ lyrics and their looks. The members are close to other bands in the scene and even have personal projects with other musicians beyond Shellmy, like Hyo’s Rshitei session , or Yuga’s other band NIGAI.

We have already spoken on other occasions about the mythical livehouse OSAKA MUSE, a staple in Kansai’s visual kei subculture scene, which hosts new talents as well as well-established artists. That evening, the livehouse was so full that by 17:00, fans were crowded beyond the access doors, ready to enjoy the show even from the corridor! I had never seen so many people in this place.

At 5:30 p.m., red lights are turned on, the atmosphere warms up as the volume of the music increases.
The event begins with enthusiastic applause from the audience. The first to come on stage is Kou (drums), drumsticks in hand. He hyped the audience, making them even more excited. Meanwhile, Ryo (bassist), Yuga (guitarist) and finally Hyo (vocalist) come out in order, the latter standing with his back to the audience.
He officially opens the concert by turning around and greeting: “We are Shellmy“.

During Shellmy‘s events, the members’ stage outfits always follow some kind of dress code; this time, they are all wearing what looks like a group uniform made up of a black orchestra musician top and classic punk style plaid pants . They were seen wearing them in the past for ZY magazine. 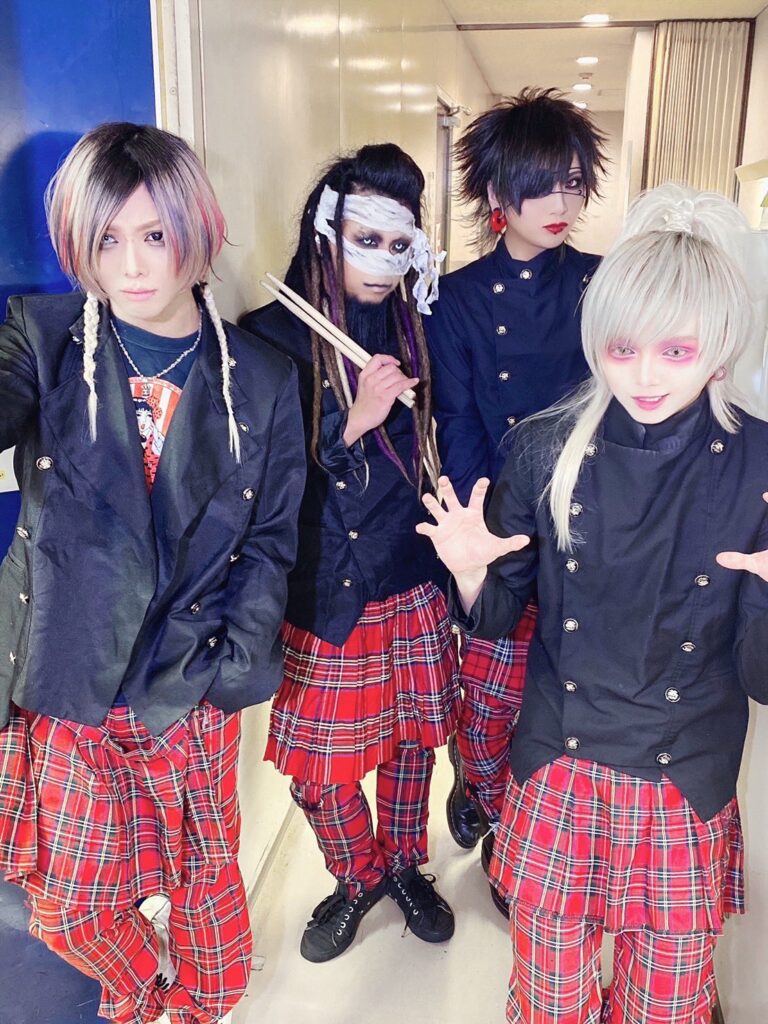 After Kou’s enthusiastic entrance, the attendees were ready to give it their all. The setlist opens with “Heisei Menhera Theory” Hyo showed his middle finger to the audience and they responded by headbanging.
During the chorus, the entire room jumps in unison to “Menhera!” and immediately does the wristcut gesture.

As the song ends, Hyo continues to cheer on the fans, energetically yelling “OSAKA!”. As readers might already know, due to COVID-19, the public cannot respond verbally, so they respond by making the band’s special way of making the sign of the horn.

The members of the audience take out their fans to dance along to “Hi Normaru”.  One of the best things about Shellmy‘s concerts is the variety of musical styles that we can hear and how the fans experience it.
During “Hi normaru” Yuga truly shines during his guitar solo and we can see that all eyes are on him. The fans open their arms for him, a typical scene during a visual kei concert.

After taking a break and drinking water, Hyo thanks everyone for coming. He comments that he has made many great memories during the tour, and that he recalls many great moments from the past few years.
During this MC, we can hear in the background the faint sound of rain falling.
He makes a brief overview of the band’s and his own personal history during the last 5 years. He laughs at the sound of rain and then begins what we believed to be the most sentimental moment of the concert.

The stage lights turn blue, reminding us of a rainy scenery. The atmosphere feels dramatic as Hyo opens an umbrella, emulating the promotional video of the song. 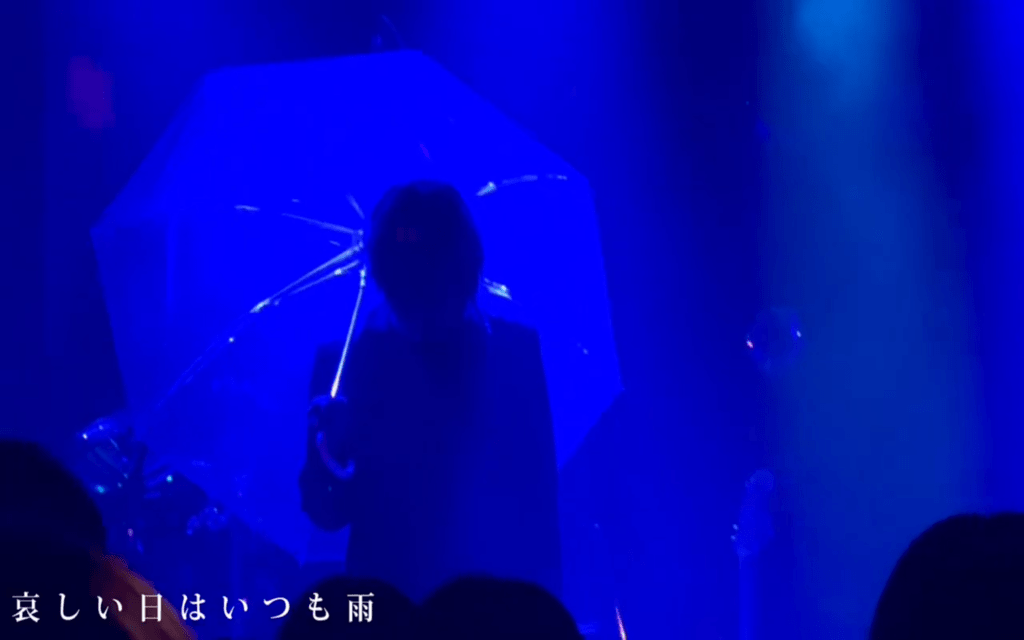 With the first piano notes of “Kanashī hi wa itsumo ame” Hyo asks the public to open their hearts and to enjoy the song fully. The fans stand still the entire time.

Starting with the rain, then playing “Kuroneko” and other emblematic songs, the band performs “Hakuchūmu no ato, yuki” which brings the ballad segment to a close.

Shellmy takes a short break. This time, upbeat music plays in the background, raising the spirits for what is to come.
Hyo greets the audience again and explains that despite the current situation, they are glad to have been able to tour again and to be able to continue doing what they like.
The members chat casually to each other, even speaking a little bit of Kansai-ben (a dialect used in Osaka and its surrounding regions).
Once the MC is finished, Hyo raises his hand, making the sign of the horns that is characteristic to Shellmy, and yells “Kakkate koi!” ( “Bring it on!” in Japanese), which signals that some powerful and energetic song is coming.

They play “Paraizo” which includes more traditional Japanese sonorities. The audience, brimming with energy, dances along by performing furitsuke (coordinated dances of fans at concerts in Japan).
A really frenetic moment between applause, dances and fan flights. 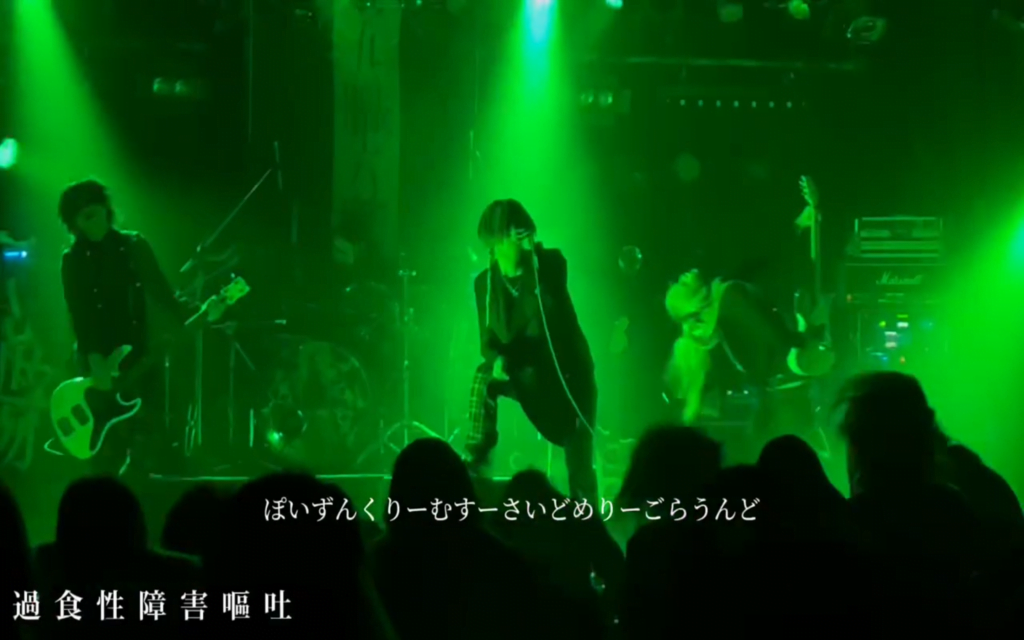 The band is in full swing, moving around the stage, and the entire room responds by headbanging to the beat of the music. During the chorus, Ryo pretends like he is about to throw up, since it is the theme of the song. Perhaps that explains why the lighting was green during the performance… 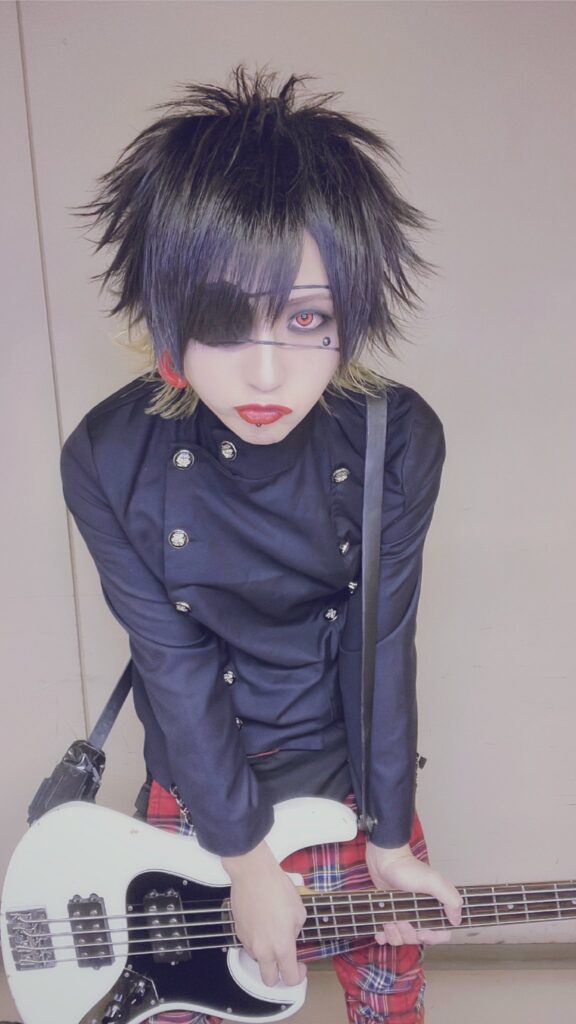 During “Yasashii sekai” the attendees are just as energetic and the members Shellmy ask for even more. Hyo leads the audience from left to right along a circus rhythm, making a hilarious scene to witness.

Hyo puts on the guitar and announces that “Wristcut baby” is going to be the last song… Red lights run through the room. The first chords belong only to Hyo and his guitar on stage, he screams intensely and the rest of the band joins in.

After a well-deserved break, Kou returns to the scene, challenging the audience: “Osaka, do you still have energy? Are you sure?” To encourage us again, he gives us a drum solo, but leaves the stage as soon as it ends. A few minutes later, all the members of Shellmy are back on stage. 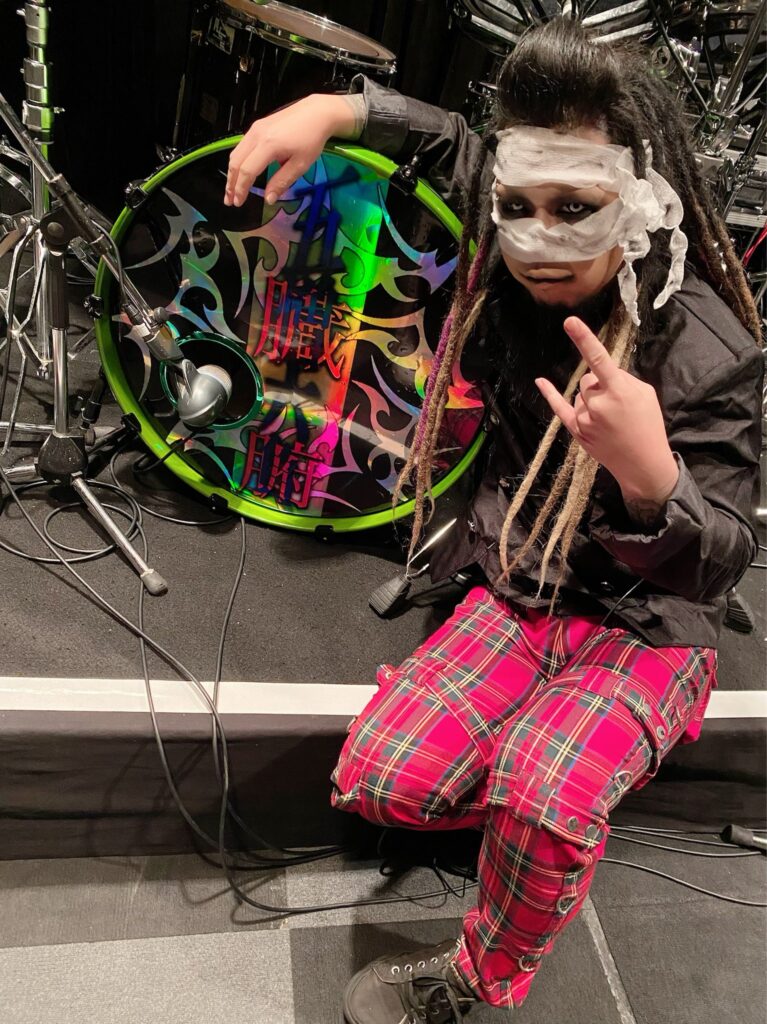 The fans cheer for them with a long applause and show off with “Human gate” . Hyo points to the entire room and then to each member, ending with Yuga, which he approaches with open arms, as if absorbing his guitar skills.

Hyo explains that they have been active in the visual kei scene for many years and that he feels happy to be able to express himself through music. He says that he has many thoughts in his head right now, but that he does not need to explain further because he trusts that we understand his feelings.
The members also expressed the attachment they feel towards OSAKA MUSE and their beginnings in the music scene.
Hyo gets emotional remembering all the time the fans and members have spent together and can’t help but shed a few tears. It’s a touching moment that further proves that Shellmy is a band that truly knows how to connect with their fans.

It was time to resume with the music! Hyo, who still can’t seem to shake off the emotion entirely, begins to sing “Daikirai anata no tame ni”.
All the members of Shellmy surround Hyo to cheer him on, dressed as schoolboys, it looked like a farewell stamp on their last day of high school.

With “Heisei 32 nen he” the concert ends and the curtain closes with them saying goodbye.

There was a deep silence as the fans caught their breath and began to clap. Honestly, we all felt that this would be a concert to remember, like the ones you usually watch a thousand times on YouTube no matter how long it’s been.

But… the show wasn’t over yet! Shellmy still had one last unexpected gift in store for us.
On the left side of the room, we were exclusively shown a screening of their new MV: “Kisaragi Eki”! In addition to that, a video revealing the details of their next tour in 2022 was also projected. The fans, over the moon, applauded happily, as a sign of gratitude after being shown such important unpublished content… 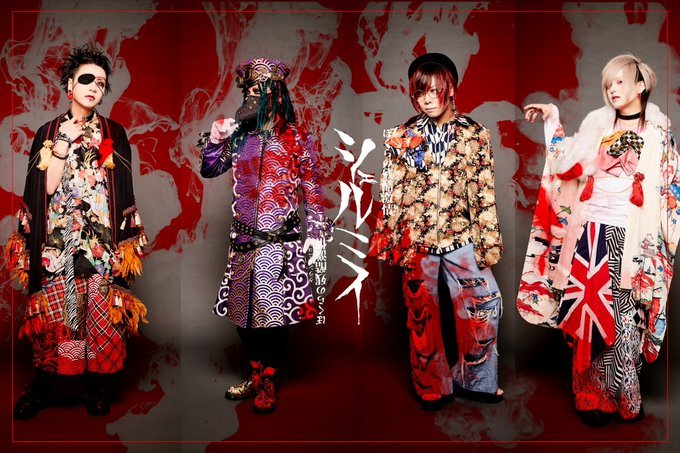 Suddenly, the curtain opens and the members of Shellmy appear, wearing the new looks seen in the brand new MV projected only a couple of minutes ago. The euphoria that took over OSAKA MUSE at that moment is impossible to put into words.

Something like a Christmas present from Shellmy to all their fans.
The melancholy atmosphere of “Kisaragi Eki” was the final touch to a night full of feelings.


Do you have any questions for Shellmy?
Leave them in the comment section below! 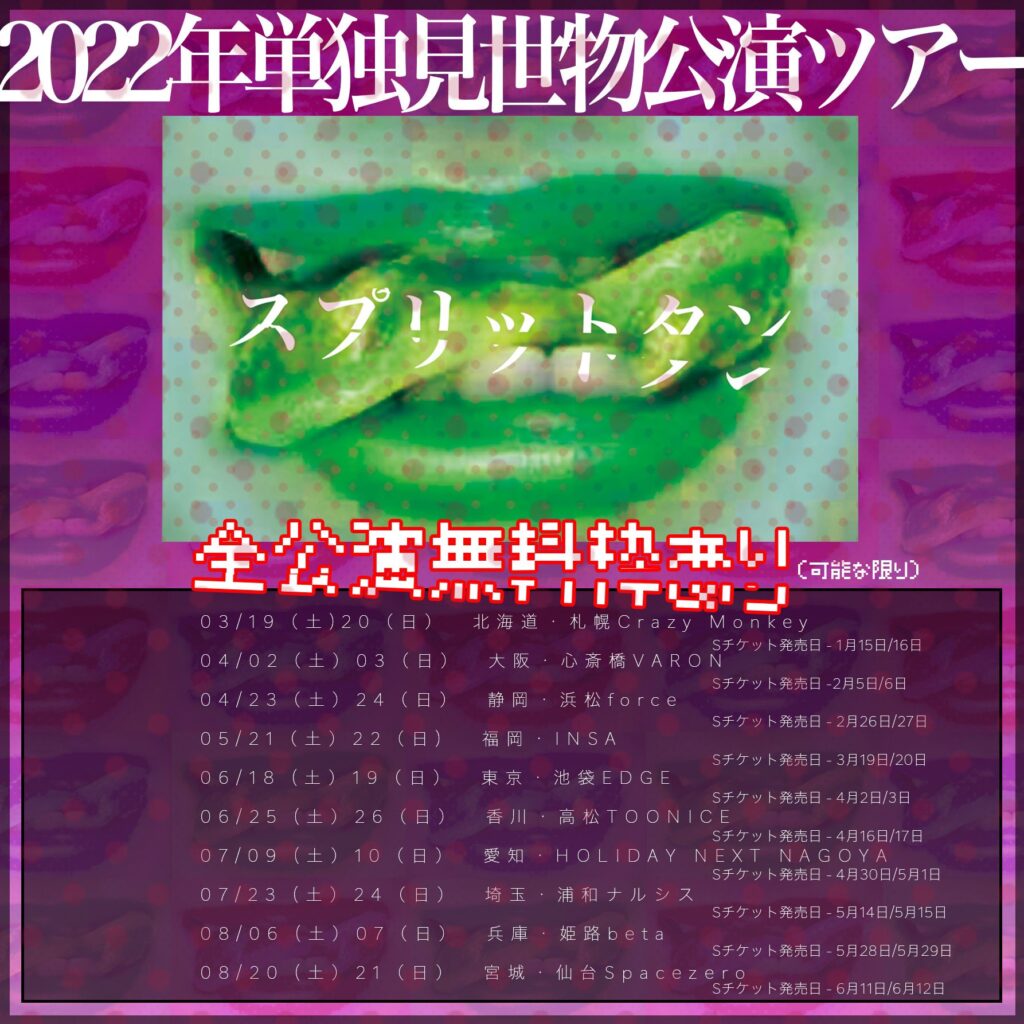