This is the debut of NINTH IN PLUTO, previously known as NINTH. After giving a new approach to the concept of the band in 2022 they decided to start a new adventure. From NIPPONGAKU we had the pleasure of attending its official debut on April 29TH at the Shinsaibashi SOMA hall in Osaka. 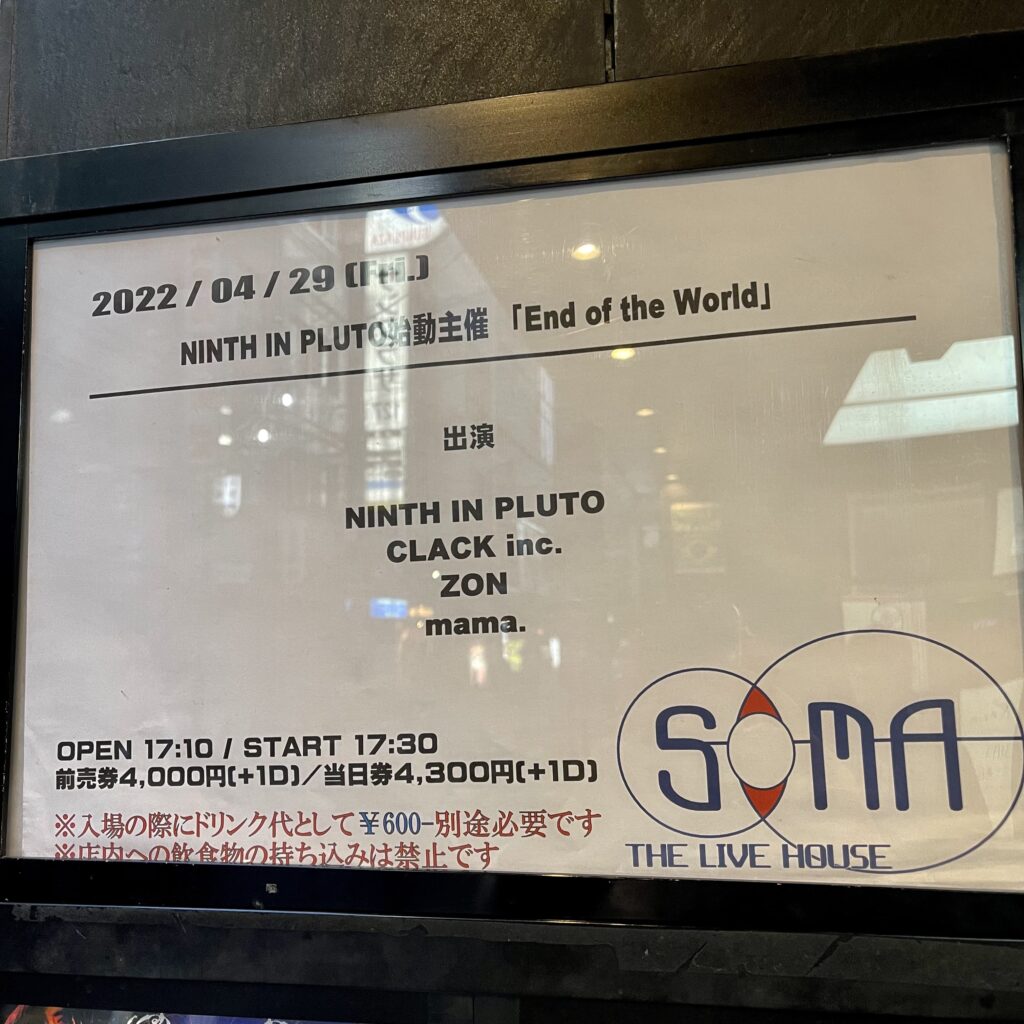 NIP travels between various musical styles, fusing an aggressive style typical of deathcore with Japanese rock’s typical melodic elements. In the composition of their songs we can appreciate the musical education that the members have received and their exquisite cultural level. On the other hand, in the composition of the lyrics we see a reflection of the vision of everyday problems and their consequences on the individual. 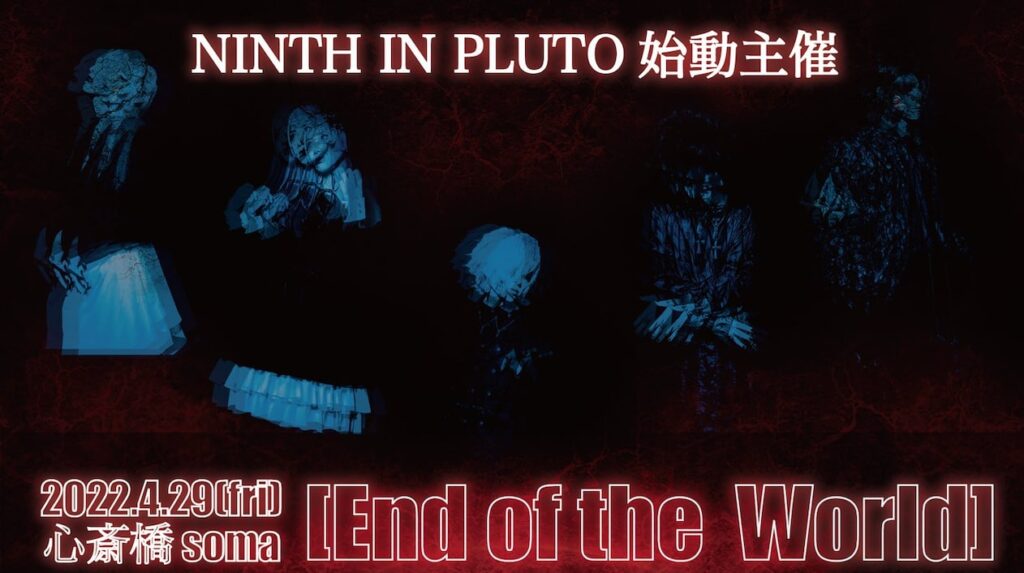 The show began with a clerical song, like if we were in a church. A tune in which prayers in English could be heard.
Once the curtain opened the first to appear on stage was Raika (Dr), followed by Toma (Gt) and Yosuke (Gt), finalizing with Zero (Vo.)
The atmosphere was full of solemnity and the heavenly music faded while blue lights appeared at the back of the room that marked the beginning of the end. As the volume increased, Zero raised his arms and ended up pointing at both guitarists. The already impatient audience started headbanging with “End of the World”.

Even though this being the official debut of NINTH IN PLUTO, the musical quality was extremely high. Zero’s gutturals made the first row move frantically, spreading the feeling to the rest of the room that was slowly following the in crescendo rhythm. Fans managed to do furitsukes (furi, coordinated fan’s dances) throughout the event even though the CD had been released just a few hours earlier. 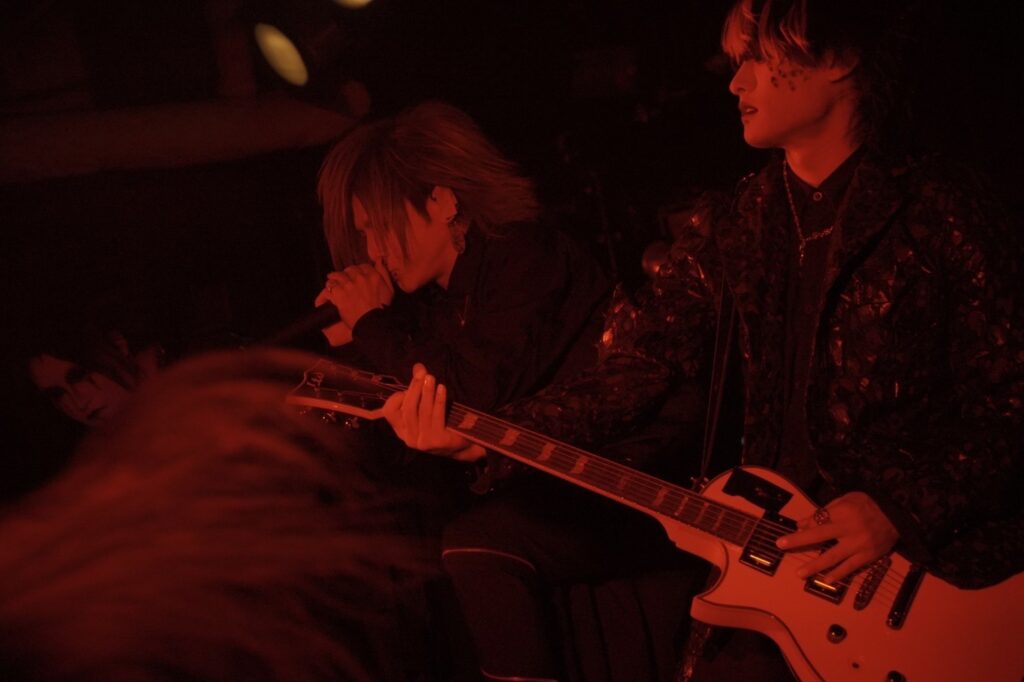 After this, Zero raised his hand to advise us to take a breath, because this has only just begun and they are going to crack the whip.
The lighting turned crimson red in “VENOM”, Zero transported us to the suffering of the human existence with black metal’s style screams. The different guttural techniques elevated us to various levels of brutality although during the chorus we were calmed down with a deep tone. Zero’s vocal range left us all breathless, but soon Yosuke and Toma took it upon themselves to bring us back to reality by changing positions and giving it some welly.

In “UNWILLING” we discovered another yet new façade of NINTH IN PLUTO, it could even be their letter of introduction due to its multiplicity of styles. In the same song Zero used from falsettos to deep, clean, guttural voices… But there was still much more to come, Yosuke with his guitar took center stage and everyone in Shinsaibashi SOMA opened their arms towards him showing devotion. Raika‘s double pedal did not stop thundering before the large number of breakdowns, and the guitars went along with long but at the same time serious and dark notes. 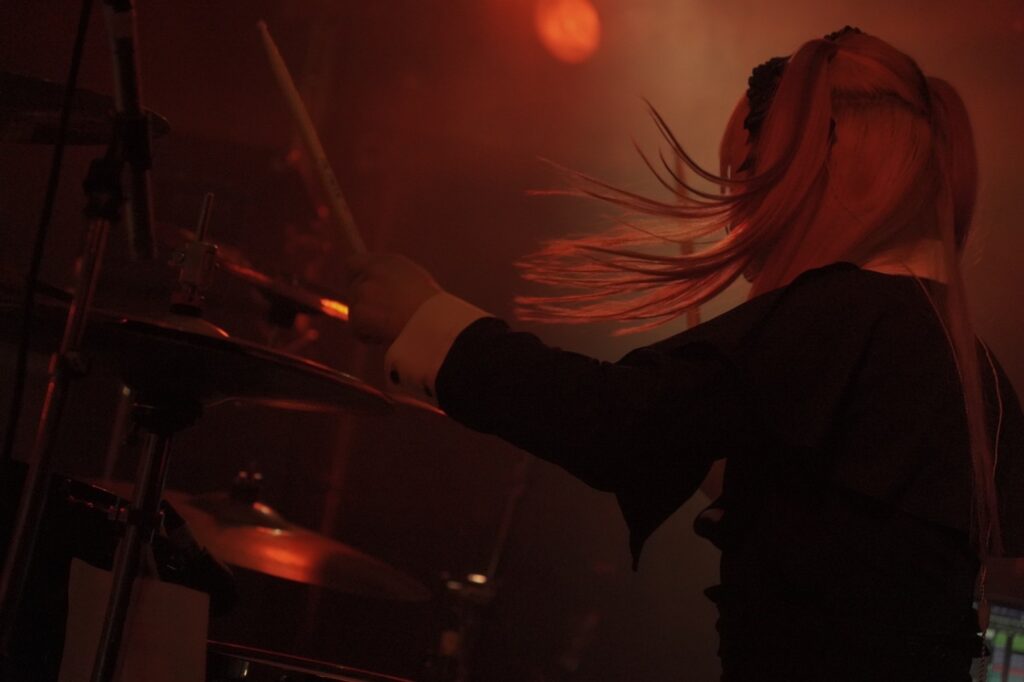 After so much intensity, everyone turned their backs to the audience, the tune of “GEMINI” began, which reminds us of a horror movie, like the moment before being murdered, or being chased by a monster… And we were right true because after a few seconds Zero managed to say “Shinitai” (I want to die in Japanese) repeatedly. He began to move imitating a puppet, as if being controlled by someone. Anxiety and fear were palpable in the atmosphere due to their cries for help, a sensation that increased to its maximum strength thanks to the echo effect in the microphone.

They were cries for help towards oneself, towards an “I” that feels inferior and is not capable of complying with what society demands of it.
Suddenly, he started to laugh nervously and we all felt the anguish since the whole song resembles a nightmare. He asked someone to kill him, someone to save him from pain. A few seconds later he crouched down and with a weak voice asked for forgiveness for having been born.

Even with the absence of En on bass, that day all the members of NINTH IN PLUTO managed to make a warm atmosphere by gathering in the center of the stage. After the catharsis in the previous song the members were reborn at full capacity in “HOLLOW”. With this gasp of fresh air we also felt more relieved in the room.
There is no doubt that the culminating moment of their debut was “GEMINI”… It should be a must in every live performance! 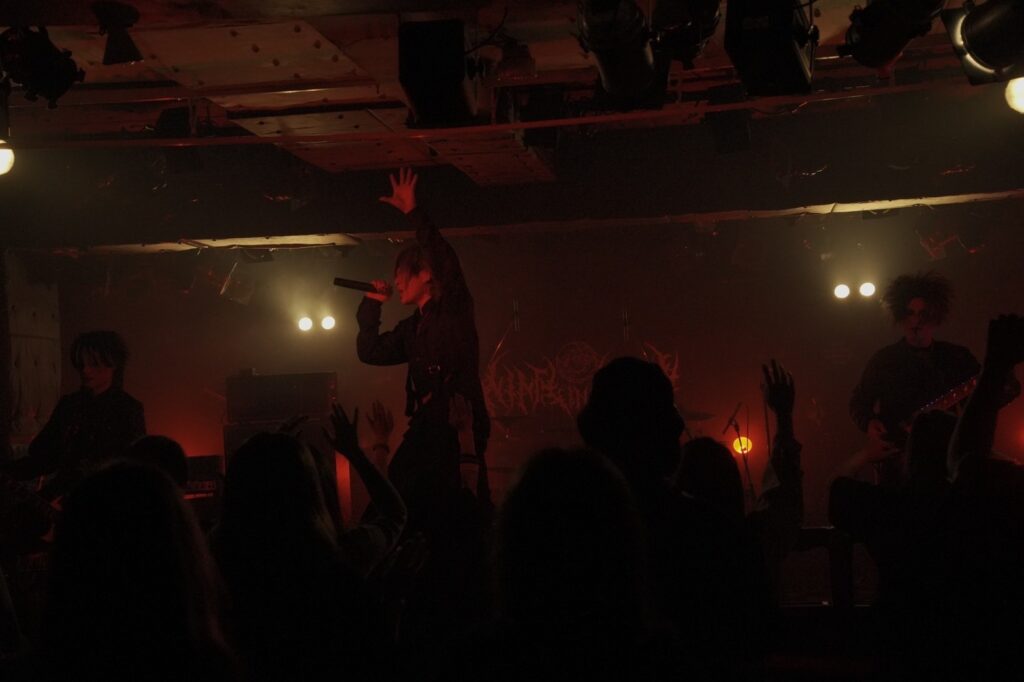 They warned us that the end was going to come soon. Like an orchestra conductor Zero led his fans from the stage during the prelude to “GESSHOKU” (which is none other than L.V. Beethoven’s “Moonlight Sonata”) to give way to pure metal with a deep voice like from another world. The lights blinked trying to keep up with the frenetic rhythm of the instrumental, something almost impossible.
After the chorus Toma and Yosuke stole all the attention with the power of the guitar solo, while giving Zero time to make a comeback later. 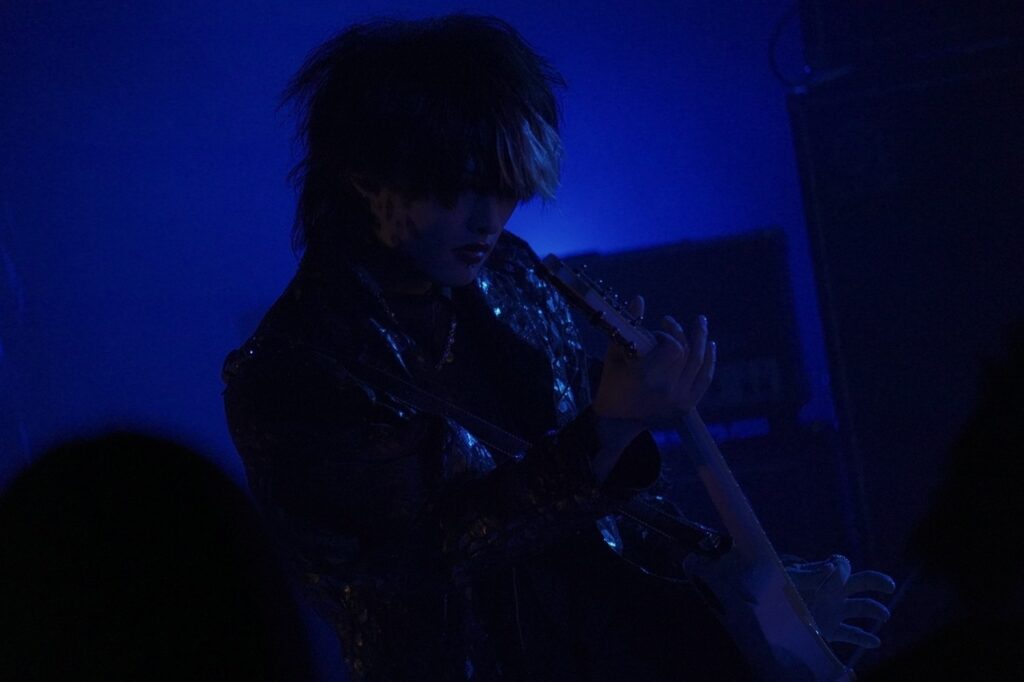 He (Zero) stayed on his knees, the lighting disappeared leaving us in darkness, making us feel the coldness they talk about in the song… In a few seconds blue lights flash the audience and NINTH IN PLUTO starts the final sprint to close their masterpiece.

During the MC we were moved by Zero’s details about the story behind NINTH IN PLUTO and their formation:
Toma and Zero had no will to live and wanted to find something that would give their lives meaning, a place to belong.
He jokes that they could be called a “Sunday band” since it was on a Sunday for three consecutive weeks that each of the members (Yosuke, En and Raika) joined the group.
He thanks the audience for being able to come during these difficult times and talks about how he wants to protect this place that they have created, share it with a lot of people and be able to play in all kinds of venues in Japan and the rest of the world. 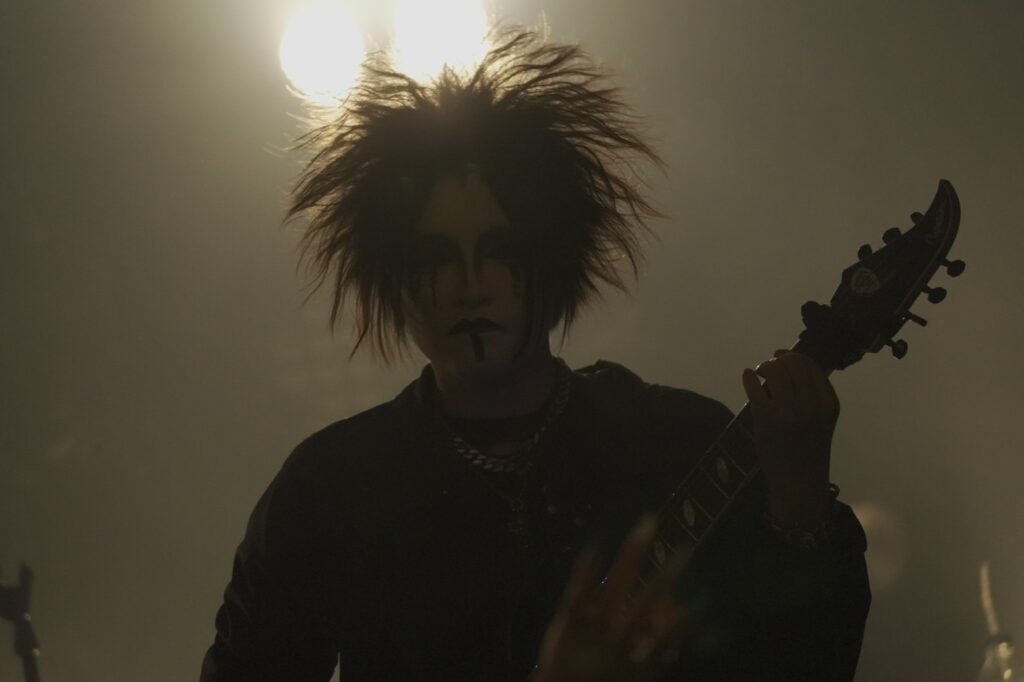 But they still had one last gift for us. “RUIN” was still to come with a calmer tone, to show us that NINTH IN PLUTO is a band that moves between chaos and harmony.

Once the event is over, we can only wish a speedy and healthy recovery to their bassist En, who due to health problems could not participate in the debut. 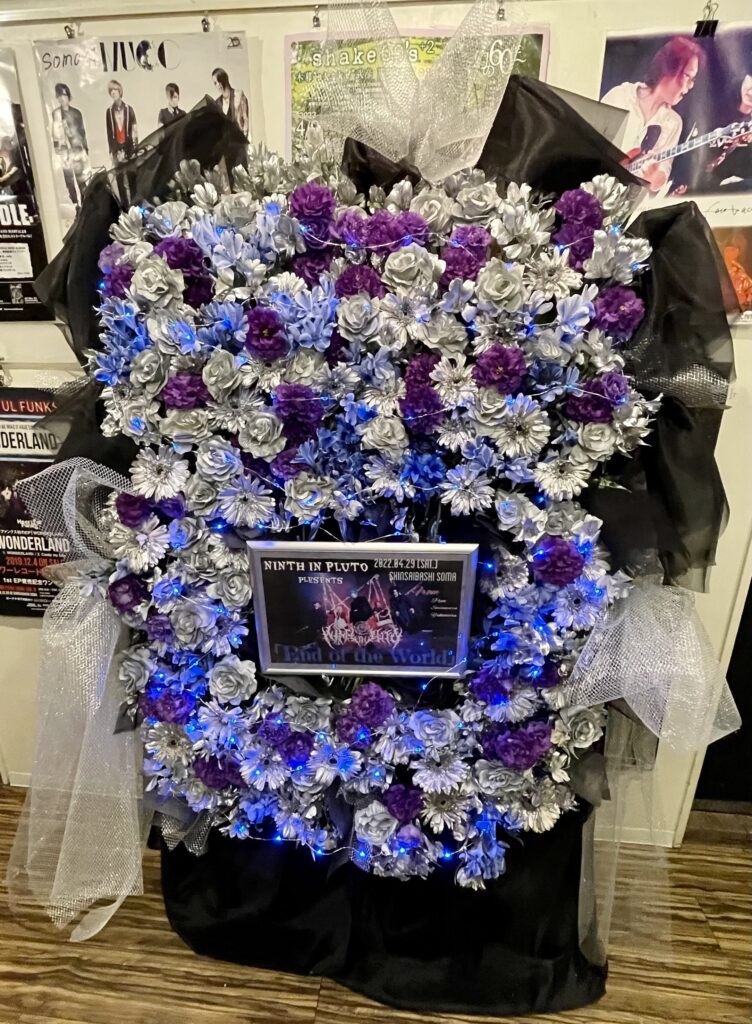 In addition to attending the concert, we also had the opportunity to have a relaxed chat with the members of NINTH IN PLUTO and ask some questions of general interest:

Before starting with the interview let us say: congratulations on your debut!

Could you introduce yourselves?

Raika: I am Reika, the drummer.
Yosuke: I am Yosuke, I play the guitar. Thank you for the interview.
Toma: I am Toma, also guitarist, nice to meet you.
Zero: I am Zero and I am the vocalist. Usually there are 5 of us but this time our bassist has been admitted to the hospital so he can’t be here with us.

(From NIPPONGAKU we wish him a fast recovery.)

First of all, is there any artist or group that has influenced Ninth in Pluto’s style?

Zero: The principal axis is metal, and within it there are other influences as heavy or metal core… We are trying to get rid of any stigma and always do what we want to do but without losing that touch of metal that I have just mentioned

Who started the group and who would be the leader?

Zero: At the very beginning it was me and Toma and then Toma introduced Yosuke and Yosuke introduced En and then lastly Reika joined. As per the leader… we can say it’s me? (laugh)

Who is in charge of composing within the group and how does it work?

Zero: Mainly at the moment the ones composing are the both guitarist, Yosuke and Toma.

We would also like to congratulate you for the debut of your eponymous album “Ninth in Pluto”, which one would you say is your favorite song in this record?

Zero: Certainly Gesshoku is the song of which we have made a MV, and it was very important for us as a group. Also is the song that articulates the entirety of the album.

In Nippongaku it drew our attention the fact that you have used Beethoven’s Moonlight Sonata in your Gesshoku (Eclipse). Is there any specific reason for choosing that melody?

Yosuke: Is a piece that I have liked for some time now and I thought that it would be a good idea to make a metal style or visual kei arrangement to it.

Have you ever been abroad? Where would you like to perform?

Yosuke: I have a friend in Barcelona so yes, I have been to Spain, France…
Zero: I have been to Boston in the USA. And if we could tour abroad we would like to go to places where metal is really appreciated like Germany in Europe and the United States.

If you could do a 2MAN live, what group would you like to collaborate with?

Yosuke: If we are talking about bands here, Deviloof is a good example. Deviloof’s members are our friends and they are also from Osaka.
(In NIPPONGAKU we also think that the style of Ninth in Pluto would match perfectly the one of Deviloof)
Zero: If it were in Tokyo, we would like to play with Dir en grey.
Toma: Razor would also be great.

Do you have any specific name for your fans?

Zero: We haven’t decided it yet.

This is a question from one of your overseas fans for Zero. You have recently cosplayed as Levi from the anime “Shingeki no kyojin” as we can see on your Instagram, what anime do you like?

Yosuke, it seems that you love cats. What is it like living with your 3 cats?

Yosuke: They are the love of my life (laugh). There are really hard moments, but those cute little creatures make my day to day happy.

Toma, do you play any other instrument apart from the guitar? What is your favorite guitar brand?

Toma: I only play the guitar, but when composing I usually watch drum videos and make the drum track on the computer. My favorite brand is ESP.

Raika, you have started Tiktok recently. How is it going so far on the social network?

Raika: I have always watched videos there and I thought it would be nice to start doing them too, the truth is that… there is not much else to it (laugh)

Zero, we wanted to ask you about why in the part where you can see the role of each member (guitar, bass…) where “vocalist” should be written, it is actually empty? Is there a specific reason?

Zero: Being honest, that’s because I don’t consider myself a vocalist in the strict sense of the word. I think that’s something to be decided by the people who come to see me live!

What else would you like to ask the members of NINTH IN PLUTO?

Do not hesitate to attend some of their concerts in Japan to draw your own conclusions. If you are reading this and you are in another country and you would like them to go on tour… Let us know below in the comment section! 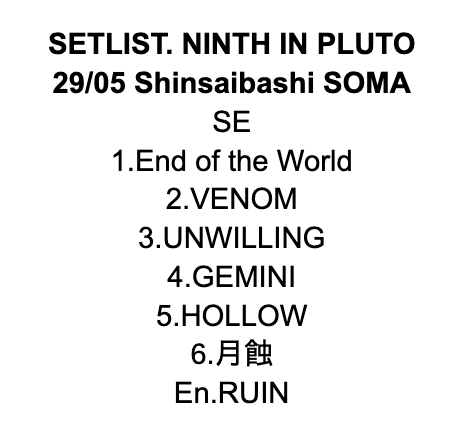