vistlip is a visual kei-influenced band, well-known in the scene since their beginnings in Tokyo in 2007. Even with such an imposing history, vistlip has successfully been able to do something many groups struggle to do: they have stayed close to their roots. Throughout their career, they’ve always kept their signature upbeat rock sound as well as their deeply emotional lyrics which speak of feelings that anyone and everyone can relate to.

The members exude a lot of positivity on and off stage. Only a few bands last so long with their original line-up but vistlip have now been playing together for 15 years, which prefaces the perfect chemistry we witnessed during their live.

The bond they have with their fans further proves how successful they are. Whenever they are touring the country, they try to hold “instore” event in the cities they stop at. During these events, fans get the opportunity to meet the band, get their CDs signed or even to attend a mini acoustic concert…This time, the event was to be held one day after their concert at  Umeda Club Quattro, at the local littleHEARTS.
And also in another stores like TSUTAYA EBISUBASHI and Tower Records Nanba.

Through this tour, the band wished to showcase the sound of their newest album release, “M.E.T.A.”, after almost 4 years of silence. The album, which is currently out, has been released in 3 special editions: “Master”, “vister” and “lipper”, also available on streaming services.

The three cities chosen for the tour were Nagoya, Osaka and Tokyo, a popular itinerary for bands touring locally.

The songs they selected made for an incredibly strong setlist, one that would certainly be a delight for any fan of the band as it both showed off their newest songs and revisited fan-favorite classics.

The first thing to catch our attention as we entered the livehouse was the intricate stage design. The stage was set up to mimic the decor of their latest music video『BGM「METAFICTION」.
It gave off a strong first impression. It reminded us of underground basements where young people hang out. Grunge, cozy and somehow mysterious.

The stage and the few stairs leading to it were covered with a thick persian-print carpet. In the center of the stage stood an imposing armchair, by which a television receiver with a glitchy screen stood… At the back and front of the stage, more props were ingeniously arranged to create a clear separation between the stage and the floor, making it look like a TV set. A damaged wall, neon lights, synthetic plants… 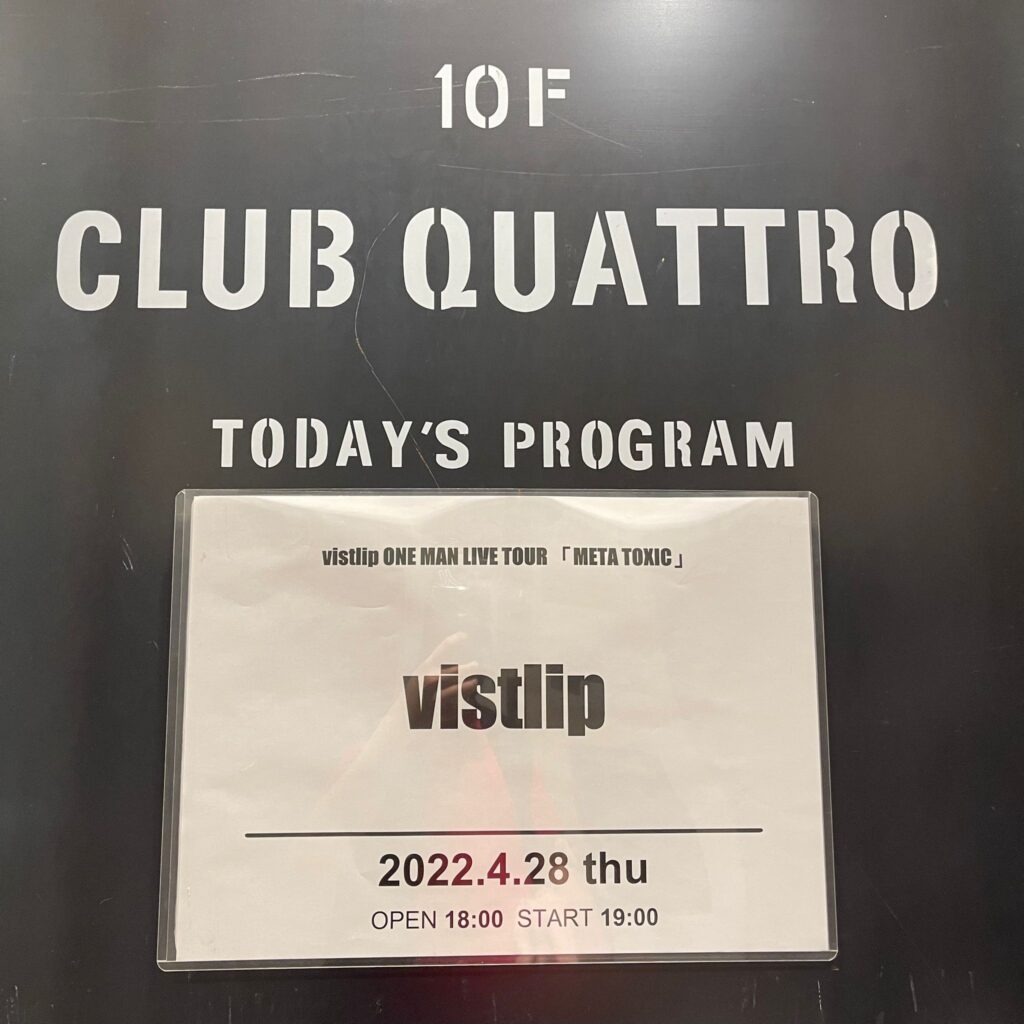 The concert opened with an electronic track. Shortly after, a female robot voice introduced herself and greeted the audience. As the tension rose, the music suddenly stopped and the voice asked  “Do you wish to continue?’’

Reminiscent of video game introductions, the voice warned us that the ‘charging’ was beginning. The members entered the stage one by one and positioned themselves.

Tomo stood in the center before walking to the armchair. Wearing his huge fur coat, he sat down in a relaxed manner and looked at the fans playfully. From where we were, he looked like royalty welcoming us into his secret kingdom. 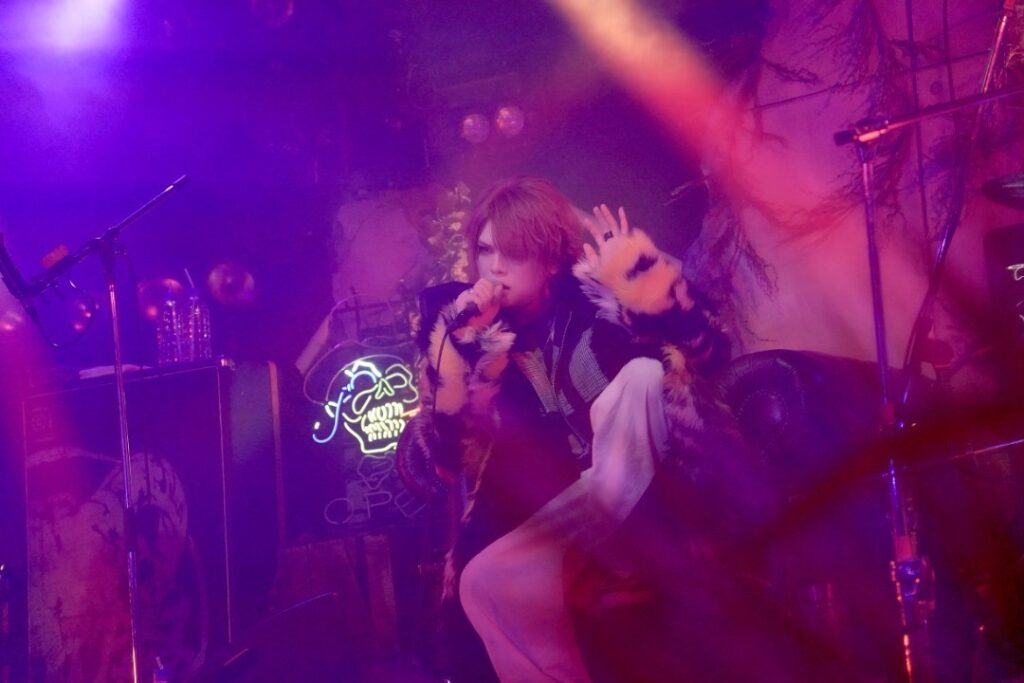 An alarm suddenly went off, alerting us. It was the signal that “BGM「METAFICTION」”, the main track of their latest album,  was about to start. The audience started clapping their hands enthusiastically. Halfway through the song, Umi and Yuh showed off their skills with intertwined guitar solos and the fans couldn’t help but extend their arms towards them, a gesture that is often seen in visual kei live performances.

A police car siren could be heard in the background. As the sound became louder and louder, signifying its growing closeness, Tomo returned to the center and, with one hand pointing to the sky, made shooting gestures in the air as gunshots could be heard in the room. During “TOXIC” he took off one of the coats he was wearing, as if to make his escape easier. As the song ended, the neon lights on the wall behind them came on, making us feel like we had returned home safe and sound. 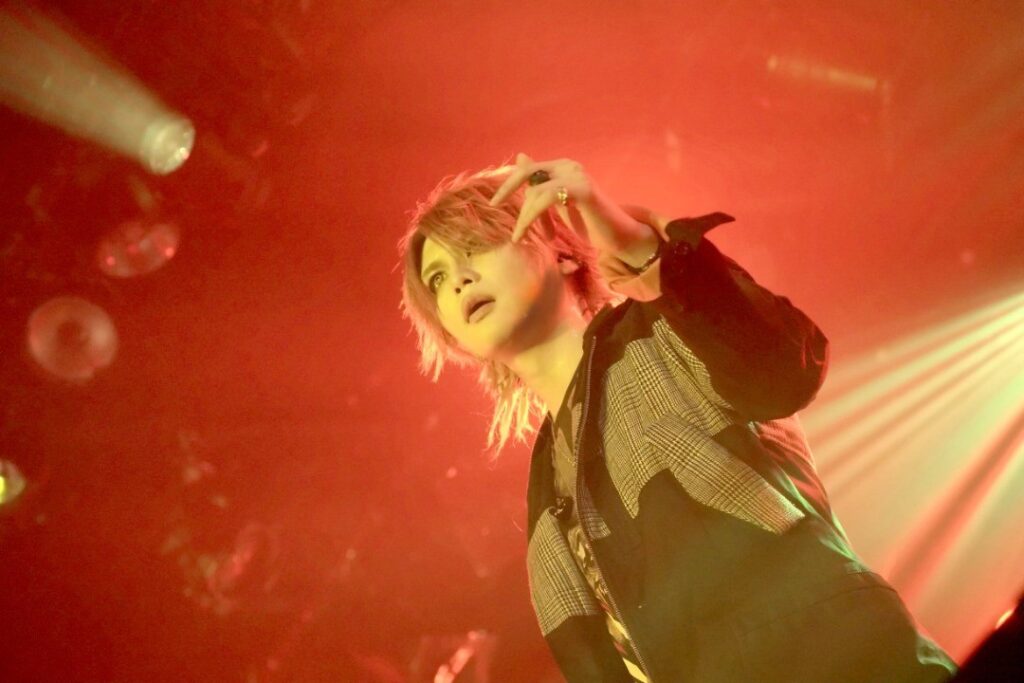 Alluding to the title of the tour, the stage became covered in a dense smoke. It felt like the members were stuck in some toxic gas. The whole room started jumping along to “DANCE IN THE DARK”. The floor was shaking so much that the reporter wondered for a second whether an earthquake was happening or if it was just the fervor of the audience (laughs). With the stage basking under shades of red lighting, we felt like we were fighting for our survival in a toxic environment.

As the song came to an end, the smoke dissipated and white lighting shone through Umeda Club Quattro. For the first time since the beginning of the performance, we were able to see each other’s faces. We hadn’t realized we were so engrossed in the performance until we had to be pulled from it.

Tomo greeted the audience and asked us if we were ready for the META TOXIC tour. The Osaka date being the semi-final of the tour, the expectations for the evening were at their highest.

Umi dazzled through much of “John Doe”, standing on a platform. The composition made us, fans of late 2000s visual kei, quite nostalgic despite being composed during the current Reiwa era. 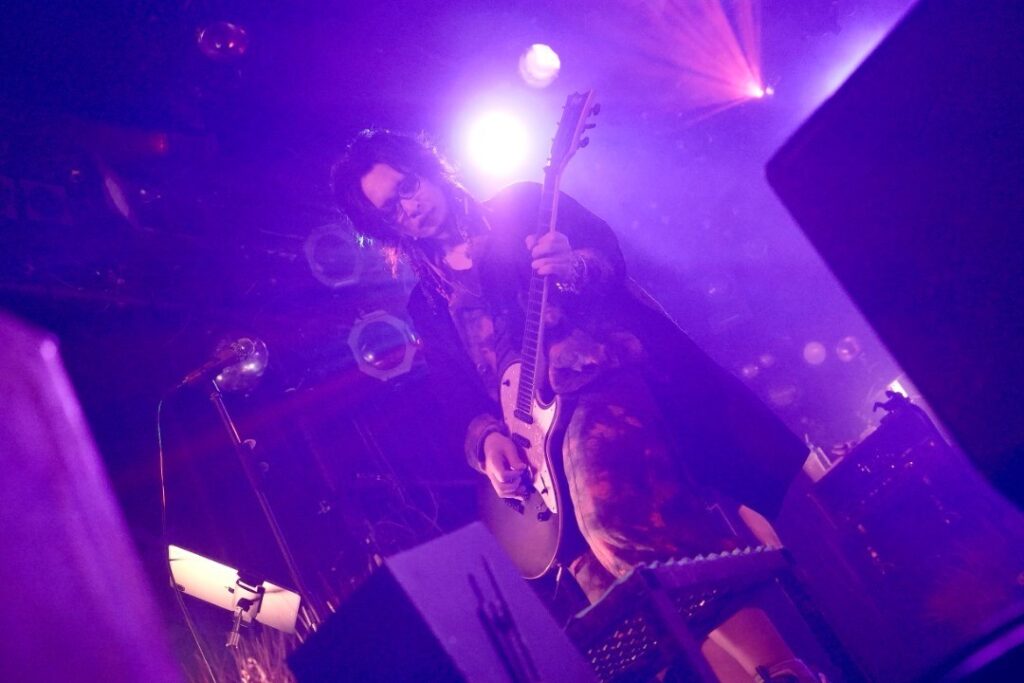 To us, “Muon” was the song that the audience seemed to have the deepest connection to.
It reminded us of a long walk in the park during autumn and it left us feeling melancholic and pensive.  There was complete silence as the last few notes of the song echoed through the livehouse.

vistlip kept offering us more and more. During “ID:ID” Tomo brought out a megaphone to add excitement to the performance. Once again, we thought the use of props really showed how creative the band is. Yuh and Umi closed the gap between the stage and the audience by headbanging along with the fans.

The floor was shaking again as the fans jumped in unison. Rui‘s bass at full power shook the entirety of Club Quattro on “HEART ch.”.
At the end of the song, Tohya asked a staff member to bring a replacement cymbal as the one he had been using had been damaged during the performance. Neither the people in the audience nor the other members had realized. His bandmates congratulated him for being such a professional and handling the issue without having the audience notice it. 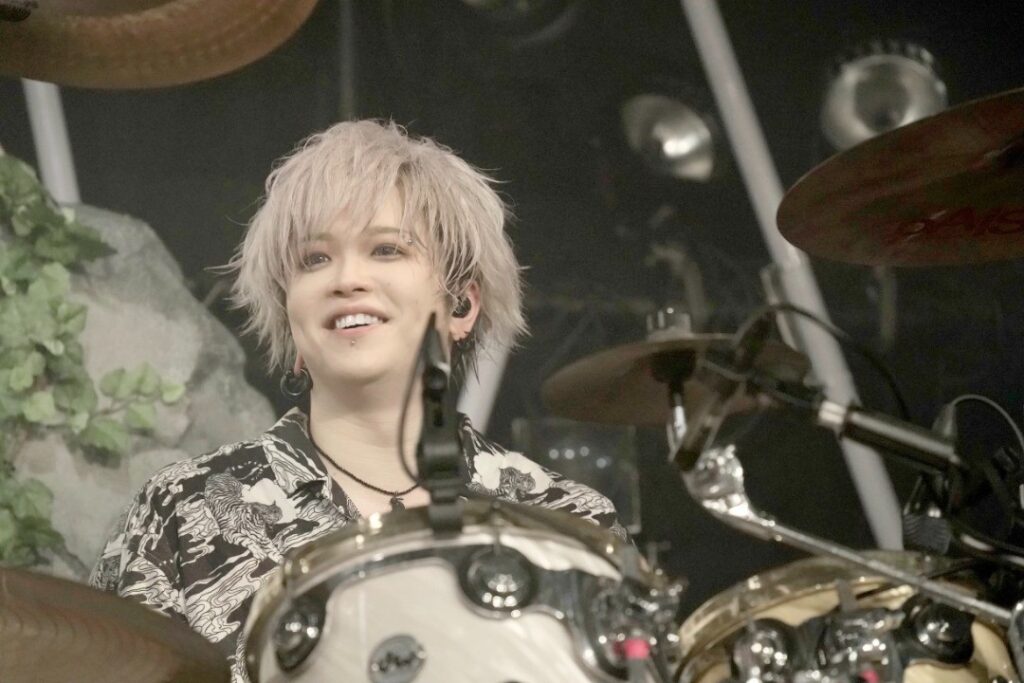 While Tohya was adjusting his setup, Tomo joked with the audience. Once again, he mentioned he felt that it was a very hot day (especially for spring) and that he felt he was overdressed in his outfit.

Tomo commented that the evening’s setlist brought back a lot of memories.
With “CRACK&MARBLE CITY” vistlip showed a different side of the band. They had a more rebellious and ‘punk’ energy, reminiscent of bands like the Sex Pistols.
Just as things seemed to come to a halt… “SYSTEM ERROR’’ began and’ the neon lights on the stage started blinking… 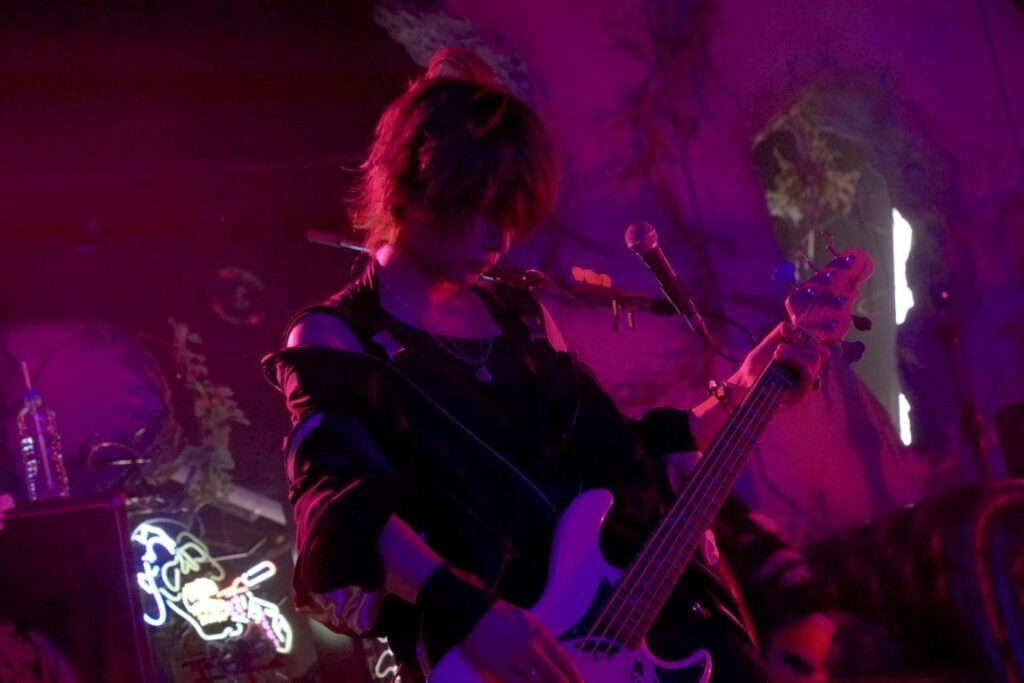 Tomo broke the long silence by singing the first few lines of “RED LIST”, accompanied only by a piano track playing in the background. He spoke to the fans directly: “You know, even when we are gone, our songs will still be here”.The stage was basking in orange lighting and from where we were, it looked as if it was intensely burning.

As the members left the stage, the lights went out and all we could see were the neon lights on the wall and the glitchy TV screen.
Tomo returned to say a few words at the start of the encore.. He was wearing the tour’s t-shirt.  He sat back on the armchair in the middle of the stage and looked ecstatic as he expressed how much better he felt after taking off his thick coat.
Tohya, usually tucked behind his drum set, wanted to address the fans as well so he exchanged places with Yuh, who sat on the drum stool and watched casually.
(One thing to be thankful for was that everyone in the group is quite outgoing. There were no awkward silences and they talked to each other naturally through the encore. They looked like Osaka natives (well-known for being social butterflies and warm to others!) 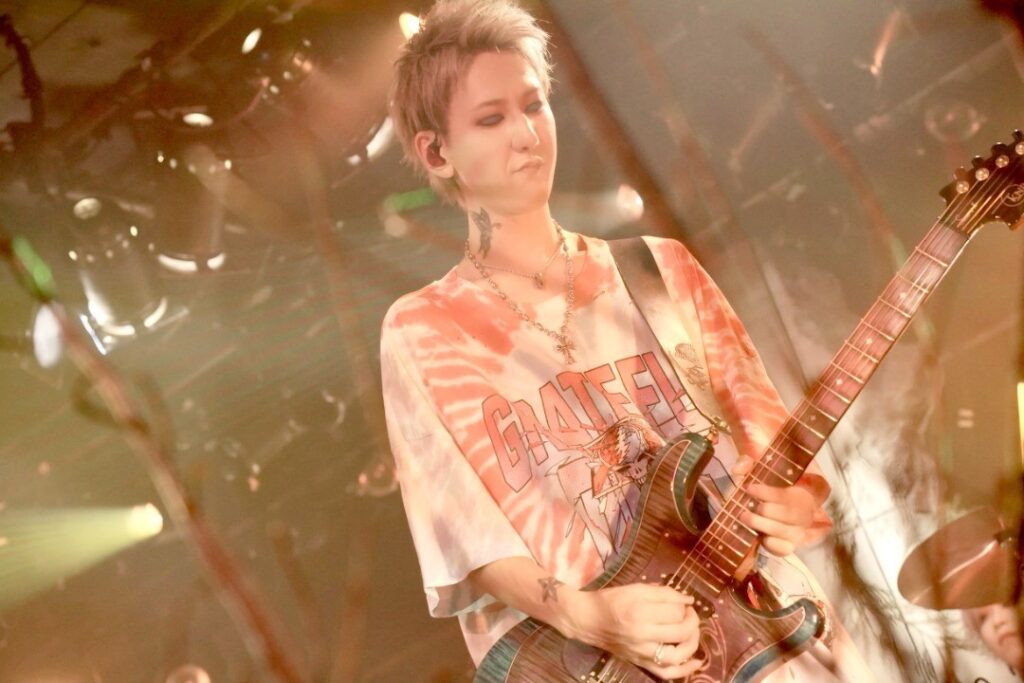 The most awaited song by the fans, without a single doubt, was “Recipe”, one of the band’s classics. The entirety of Umeda Club Quattro room dedicated their “saku” (open arms extended towards the stage to show appreciation/devotion) to vistlip. The members smiled from start to finish while watching their fans who were enjoying the moment fully. It was clear that the fans and the bands shared a special bond.

The song the band chose to bid their fans farewell was “Sunday”.
Umi took a seat and played his acoustic guitar. Tohya was watching him from across the stage, smiling fondly. Thanks to the stage set up and the funky rhythm that came from the stage,it felt more like a jam session between friends than a rehearsed performance. The mood was very warm.

Before leaving the stage, Tohya came to the front and suggested everyone should do a funny pose with their arms raised, since due to the current COVID-19 restriction, fans can’t hold hands to jump all together like they usually do. Umi refused to do the pose, finding it silly, which caused the audience to laugh (laughter).
After doing it, the members offered their fans their biggest smiles and waved endlessly before leaving one by one. Tohya was the last to leave the stage. He said goodbye with a grin, pretending to shout and exchanging a fist bump from a distance with the fans. 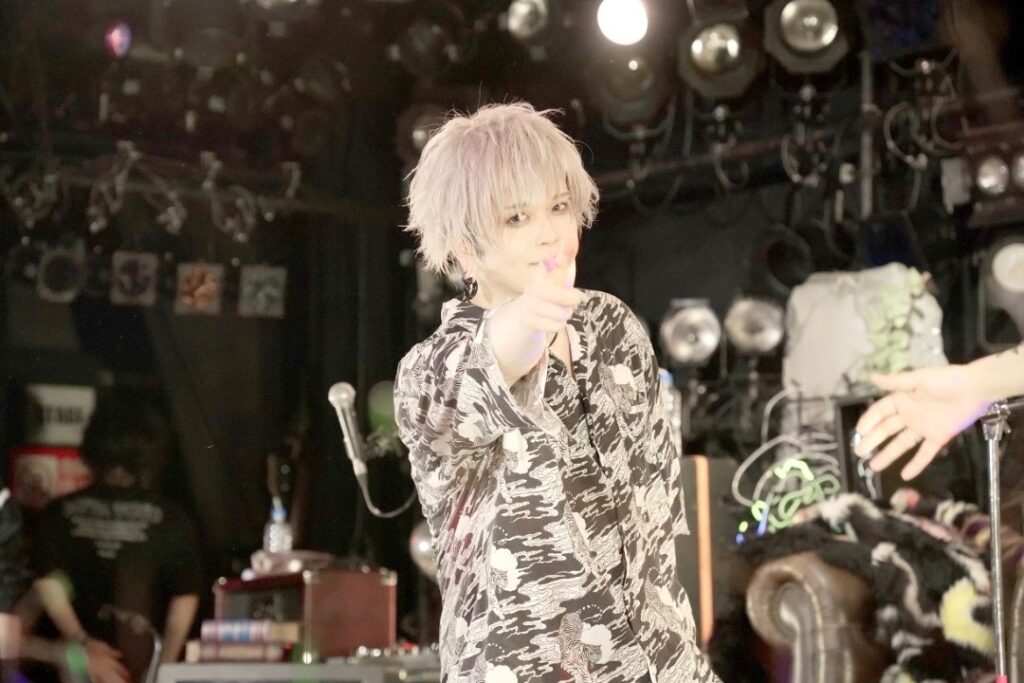 On behalf of NIPPONGAKU, we would like to thank each and every member of vistlip as well as their staff and everyone present that day at Umeda Club Quattro. It was one of the best experiences we have been graced with at NIPPONGAKU.
We are grateful for the professional yet warm welcome and for giving us the opportunity to experience this up close!

Next week, we will have the chance to sit down for an interview with the members of vistlip.
Do you have any questions for them? Leave them in the comment section below! 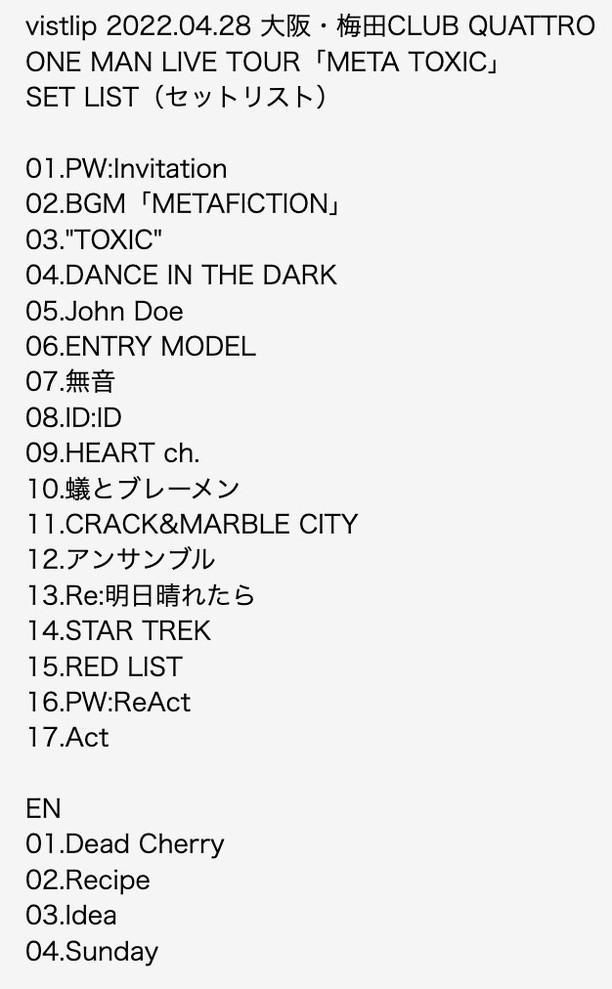