In the year of 2022, as we slowly return to semi-normal lives after more than two years of grief and uncertainty, countless bands decide to celebrate milestones in their careers by launching various anniversary-themed projects. At their entirely sold out 15th anniversary live last May at Otemachi Mitsui Hall, Matenrou Opera announced their new album’s release date for as soon as the following month and uncovered their plans to finally go meet fans outside of Kanto for the first time since the second part of their Human Dignity tour in the latter half of 2019. To celebrate the band’s history, they propose the 15th Anniversary Tour – Emerald –, 18 performances spanning over 3 months in which they stop for two days at prefectures from one side of the country to the other.

The two days are dubbed DAY1 追憶の摩天楼 (Skyscraper of Memories), where they promise to play songs from their earlier discography and DAY2 真実を知っていく物語 (A Story of Finding the Truth), where they are determined to show their current colors through the songs from their newest album of the same name, their first album in three years, the first with their current lineup. For Yusuke, their new genius guitarist, this tour is also the first time he plays outside of the Kanto area as an official member. This tour promised a lot of firsts, for both the members and the fans and we, at NIPPONGAKU, believed it would be an honor to have the opportunity to cover Matenrou Opera’s stop in our home turf of Kansai. 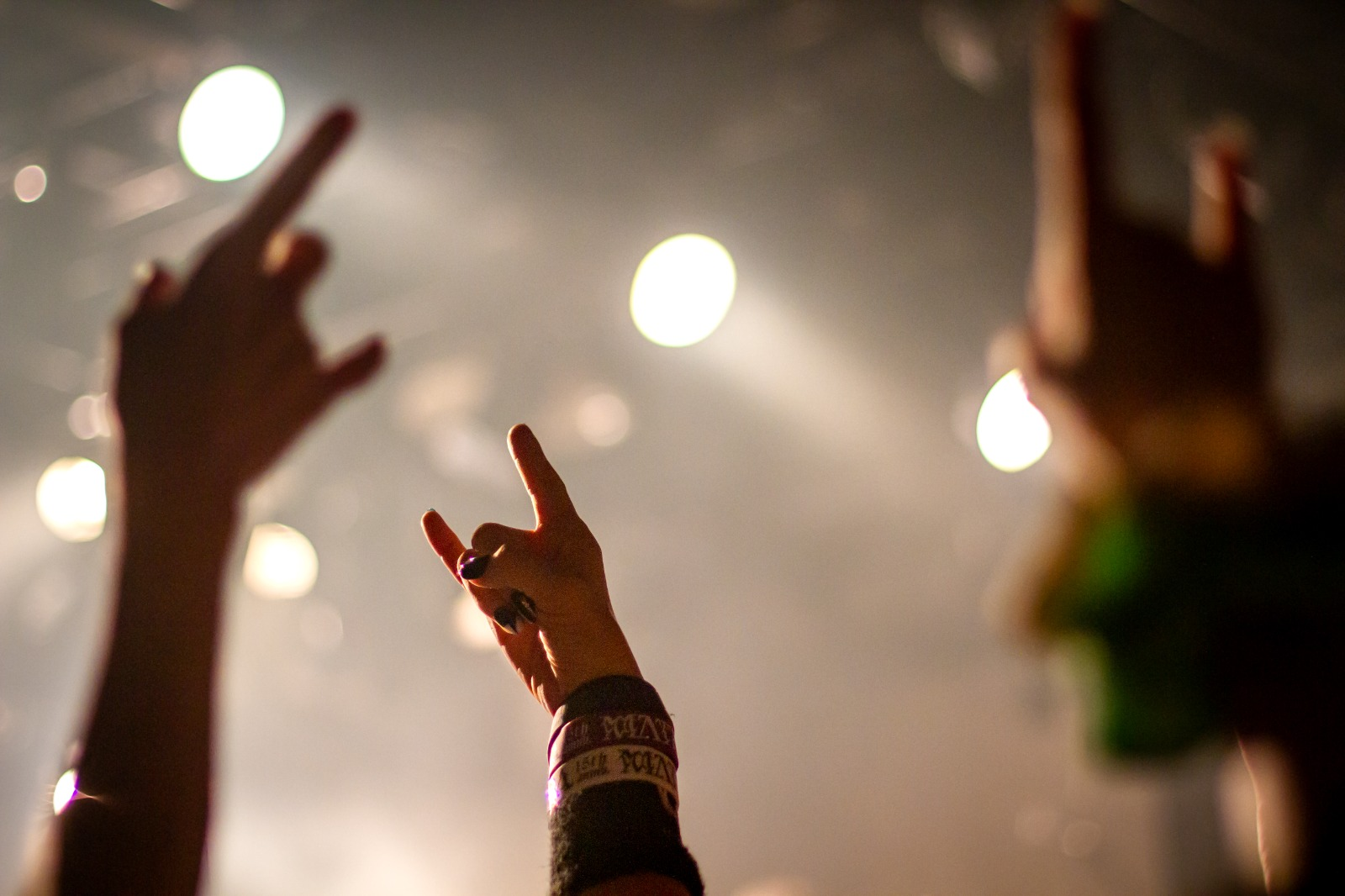 On Saturday, we arrive at Osaka Muse, a livehouse we have been to countless times, either as reporters or simply on our own personal time, as most visual kei enthusiasts in the region do. From across the street, we can see fans buzzing around the entrance of the venue with excitement. It is obvious, at first glance, that the fans all have a different history with the band. Some of them have decided to wear tour t-shirts that seem to be at least a decade old, proudly showing off their continued support. As today’s setlist promises to be full of nostalgia, we start sharing the fans’ giddiness and secretly hope we would get to hear some of our favorite songs from their discography as well.

The performances on both days are sold out and as we enter the room, we could have easily guessed it. It is packed, with barely any space to spare. A staff member comes through the back door, asking people at the front to ‘move one step’ forward, as some people were still entering the venue. At the very back of the room, an entire camera crew is already positioned, ready to film this memorable performance. Both DAY 1 and DAY 2 were set to be streamed online for fans who could not make it to today’s performance. The band’s official page had explained that the first song of each day would be streamed on Youtube for free while the rest of the performance would be made available on the streaming platform Zaiko, for people who wanted to watch it live or those who wished to rewatch it later.

Once they close the doors and everyone is settled, it doesn’t take long before the lights go off and the curtains are pulled open to reveal the stage where a backdrop of the band’s logo is hanging in the back. A sped up playback of Beethoven’s Ode to Joy breaks the silence and fans start clapping along, their mute cheers increasing in intensity as the members enter the stage one by one. Sono appears last and as he takes his spot at the center of the stage, the room goes entirely silent. He looks down with a focused expression and places his hands on the microphone stand. 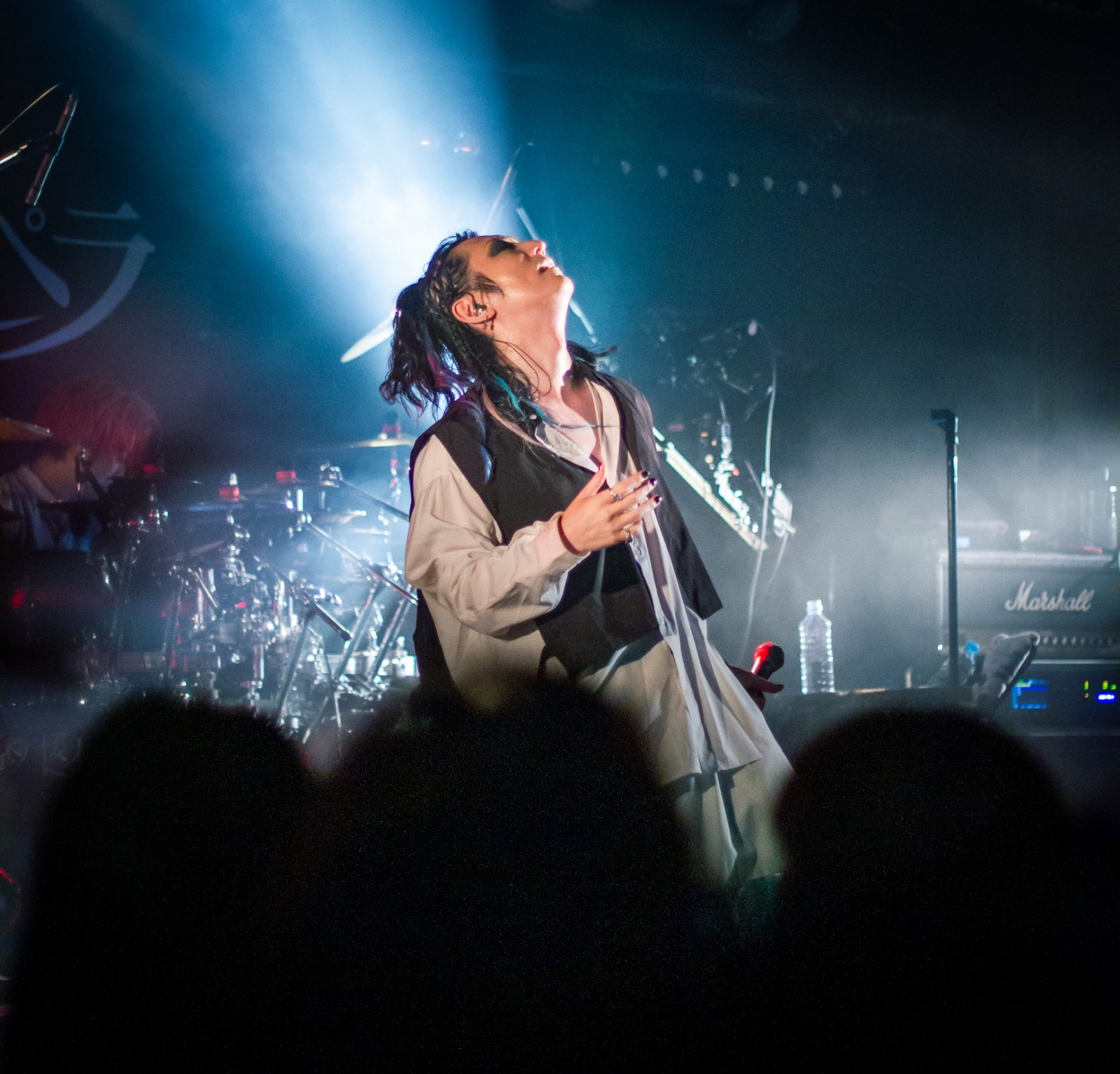 As a halo-like light shines over him, Sono opens with the first few lines of Mou Hitori No Hanayome, his clear voice echoing so crisply in the microphone it sends goosebumps down our spines. The heavy instrumental breaks the silence and fans stay immobile as they listen to this bittersweet ballad about a lonely bride, the title track to the band’s first major release in 2010. Ayame’s delicate piano melody transports us to the lonely wedding ceremony narrated by Sono and Yusuke’s gorgeous guitar solo, like a cry of the heart, pierces right through ours. 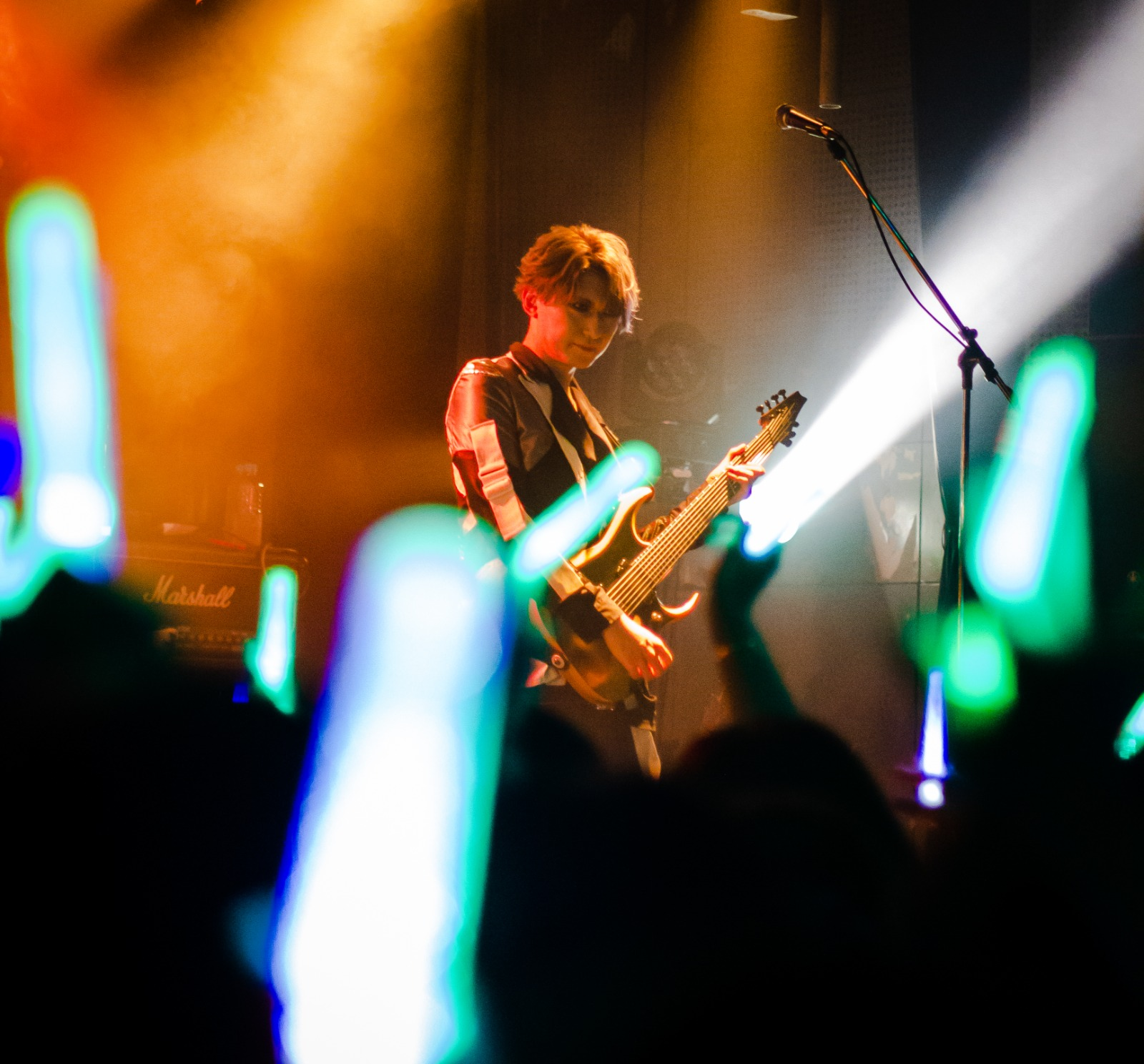 After a first emotional song, a wicked melody starts playing and fans, who recognize the intro to Justice, start headbanging almost mechanically.

The choir in the song paired with Hibiki’s fast- percussion perfectly illustrate Matenrou Opera’s strength as a band; they are masters at mixing classical sounds with more modern, metal sonorities.

Sono tells the fans the setlist they’ve prepared is quite intense and, with a knowing smile, apologizes before asking the fans if they can take it. Fans put their hands in the air, hardly recovered before Hibiki starts hitting the drums to Burning Soul with such intensity it’s hard to believe anyone has that much stamina. Fans start throwing their heads from side to side and punch the air along to the members chanting ‘Carry On, Carry On, Keep on Burning Soul’. The room certainly feels warmer and Yo, who yells along in the microphone, looks at the fans and encourages them to participate in their own way.

Between Mammon Will Not Die and Chimeishou where fans give it their all, the room grows warmer by the second. If the fans can be seen fanning themselves or wiping sweat between songs, the same cannot really be said for the members. Apart from occasional water breaks, the members don’t show any signs of tiredness yet.

After they play Human Dignity, the title track of their previous album, Sono disappears off the stage. The remaining members stay and perform one of Matenrou Opera’s signature instrumental tracks, SYMPOSION. The fact alone Matenrou Opera has so many of these tracks shows only the members’ mastery of their instruments. 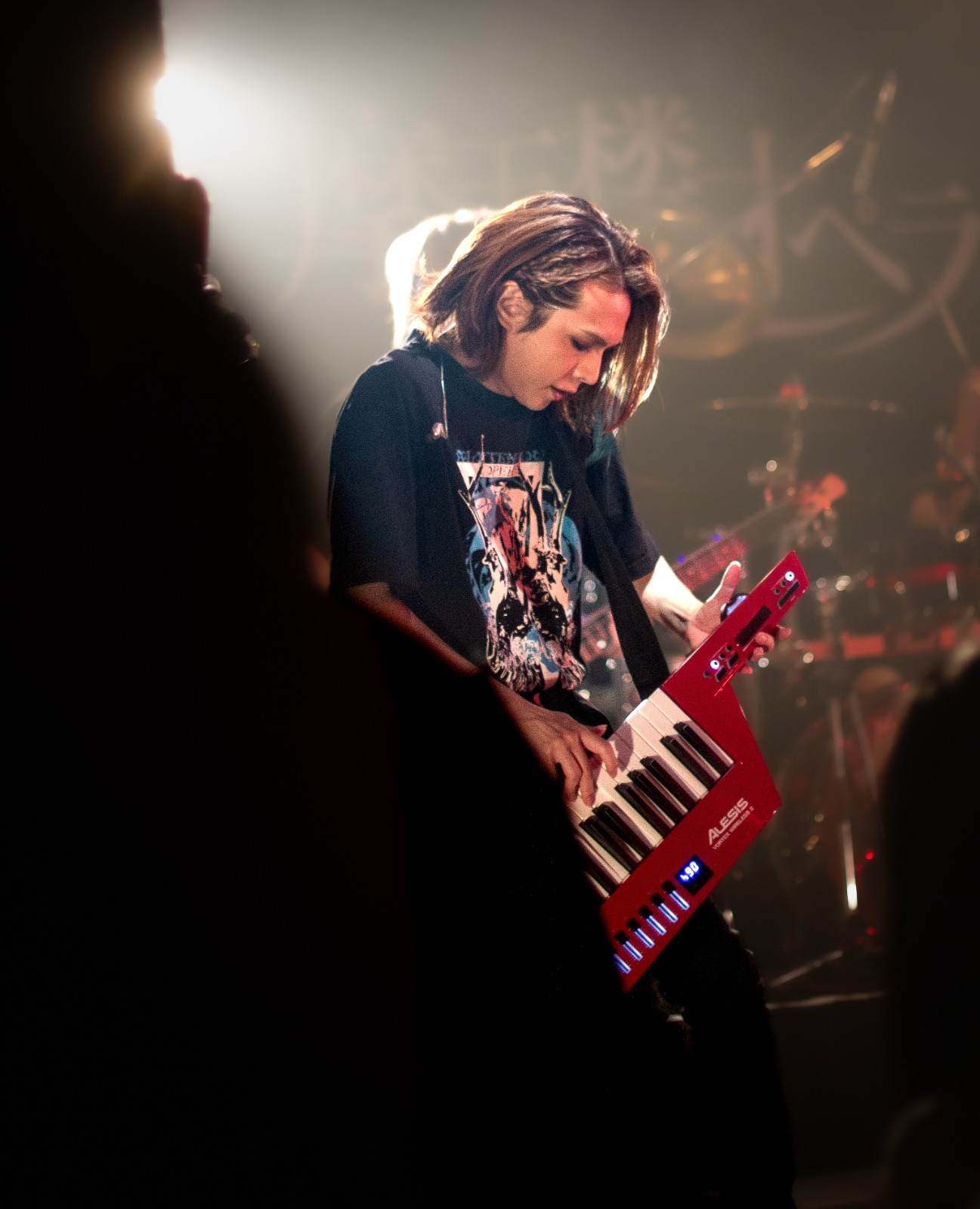 When Sono comes back, he sings acapella once again, this time it is the intro to their song Chronos. The song is quite heavy and Yo’s bass skills really shine during this performance, adding more depth to the song. Without even a break, they move on to Invisible Chaos and fans open their arms towards Sono, like they are the sunflowers facing the sun he’s singing about in the song. His high tone singing in this song is particularly impressive.

Just when we think we’ve seen the best of his vocal ability, Sono offers us our favorite performance of the night on New Cinema Paradise. His singing is haunting, emotional and nothing short of heartbreaking.

The mood is heavy when they start playing The World, the uplifting song we needed to move on from such an emotional performance. Fans turn on their official penlights and wave it along to the song. From the very back of the room, the view is breathtaking. 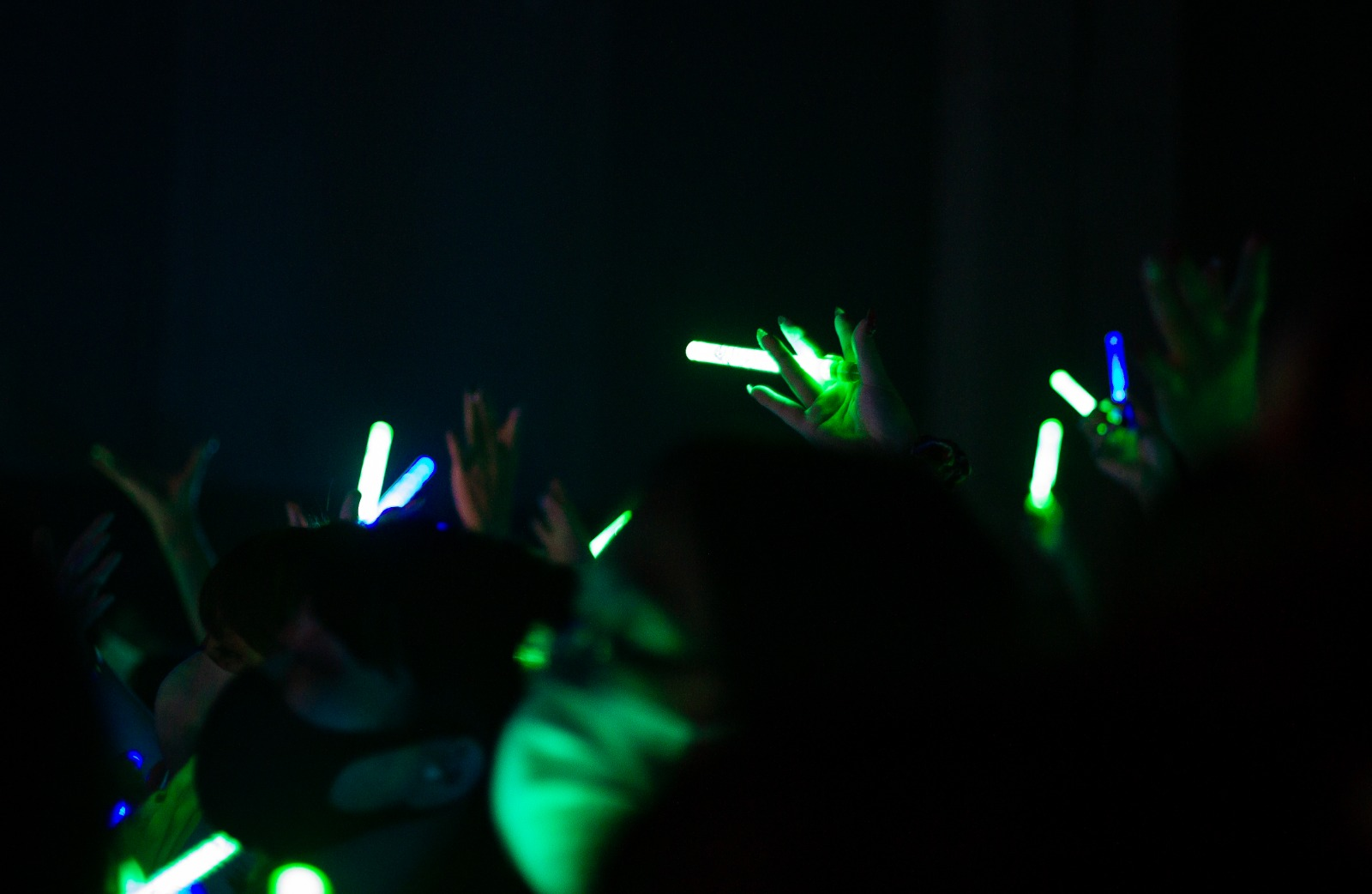 Hues of white, blue and purple mix beautifully in the audience and we find the lyrics to be quite fitting for the mood in the room. ‘From here, the world looks so beautiful and I won’t ever forget this view.’ We can feel our heart tighten, feelings of gratitude of the members and the people in the audience very much tangible and certainly mutual.

To finish the main set with a bang, they play GLORIA, their most popular song in Japan. Penlights stay on as fans extend their arms towards the stage. We are thoroughly impressed by the feelings in this performance, making us realize that gloria isn’t just a song, but also the feeling that overtakes our heart as the epic sound of the song progresses and all in the room raise their arms as high as possible, while Hibiki and Sono almost compete to see for who can hold the longest note in the end.

On a BGM version of PHOENIX, the members wave the audience goodbye before leaving the stage one after the other. Fans clap along to the song until it fades out and they’re left on their own to call for an encore.

When the members come back, the fans’ eyes light up instantly. Yo joins the rest of the members a little later, with a DLSR camera in his arms. Sneakily, at first, he takes pictures of the members while they’re talking but professionally image-conscious, they start posing and what started out as candid photography becomes a hilarious group photoshoot, to the fans’ delight. 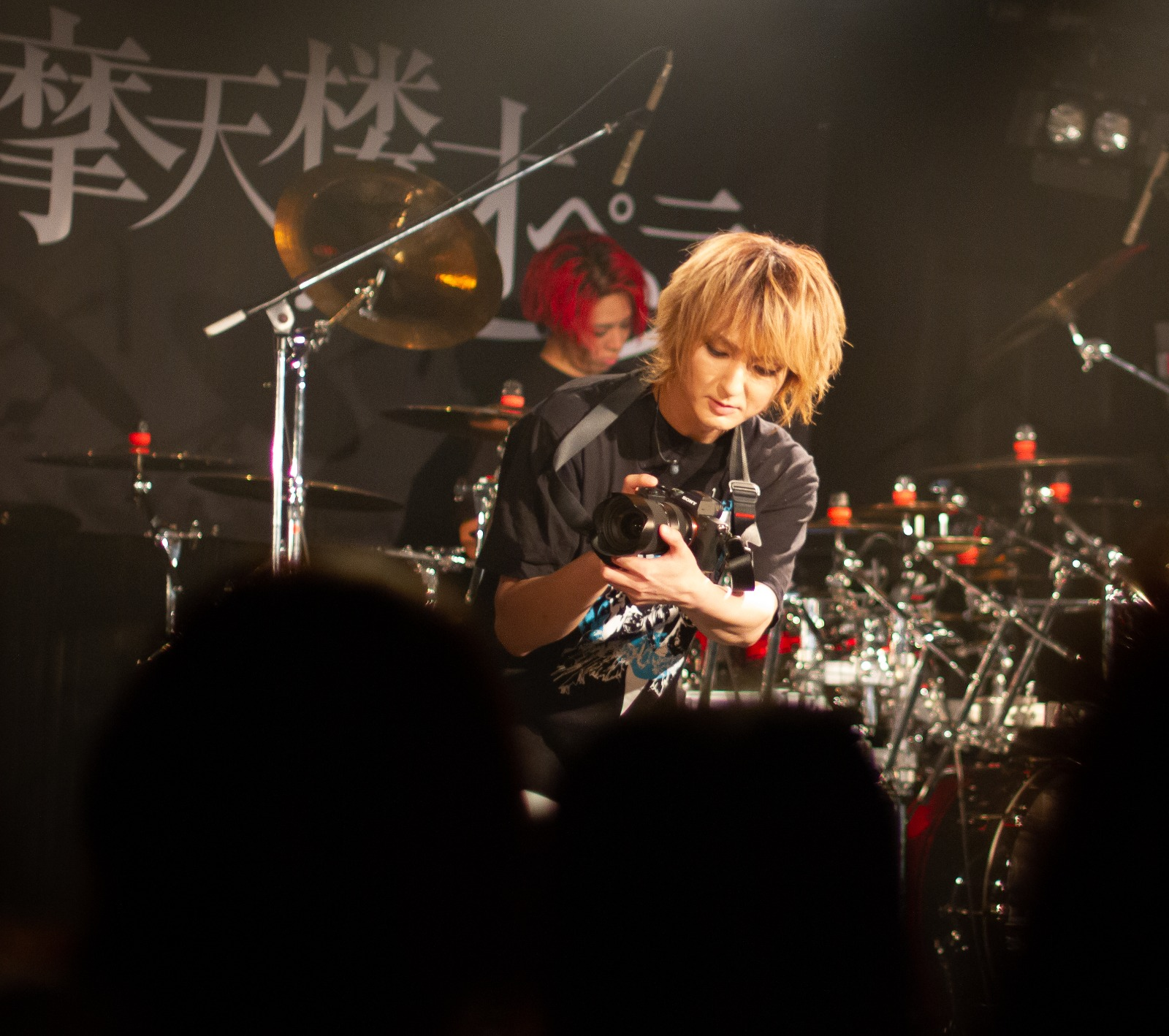 The members speak of the many memories they’ve made in Osaka MUSE, concluding it must be the livehouse in Osaka they’ve played at the most. They ask Hibiki’s opinion on it, as it is his first time playing here and he says he likes that the backstage is so spacious, to which they all agree.

Fans may not be able to speak yet because of COVID-19 prevention safety measures but they nod along to the relaxed discussion and laugh heartily at the interactions between the members. The members often look at the audience for confirmation or to get their impressions; the atmosphere is quite relaxed and the relationship between the members and their supporters seems genuinely friendly.

On the topic of COVID-19 restrictions, the members ponder when it will be possible to hold 声OK (no voice restrictions) concerts safely again. Ayame jokingly asks the others what songs they should play once the restrictions are removed and Sono says, almost automatically, that they’ll start the live with Kassai no Gekijou to Gloria, a song well-known for requiring the fans’ participation. Everyone in the room laughs at the resolve with which he says it. We can tell the fans are dying to let out their voices too. 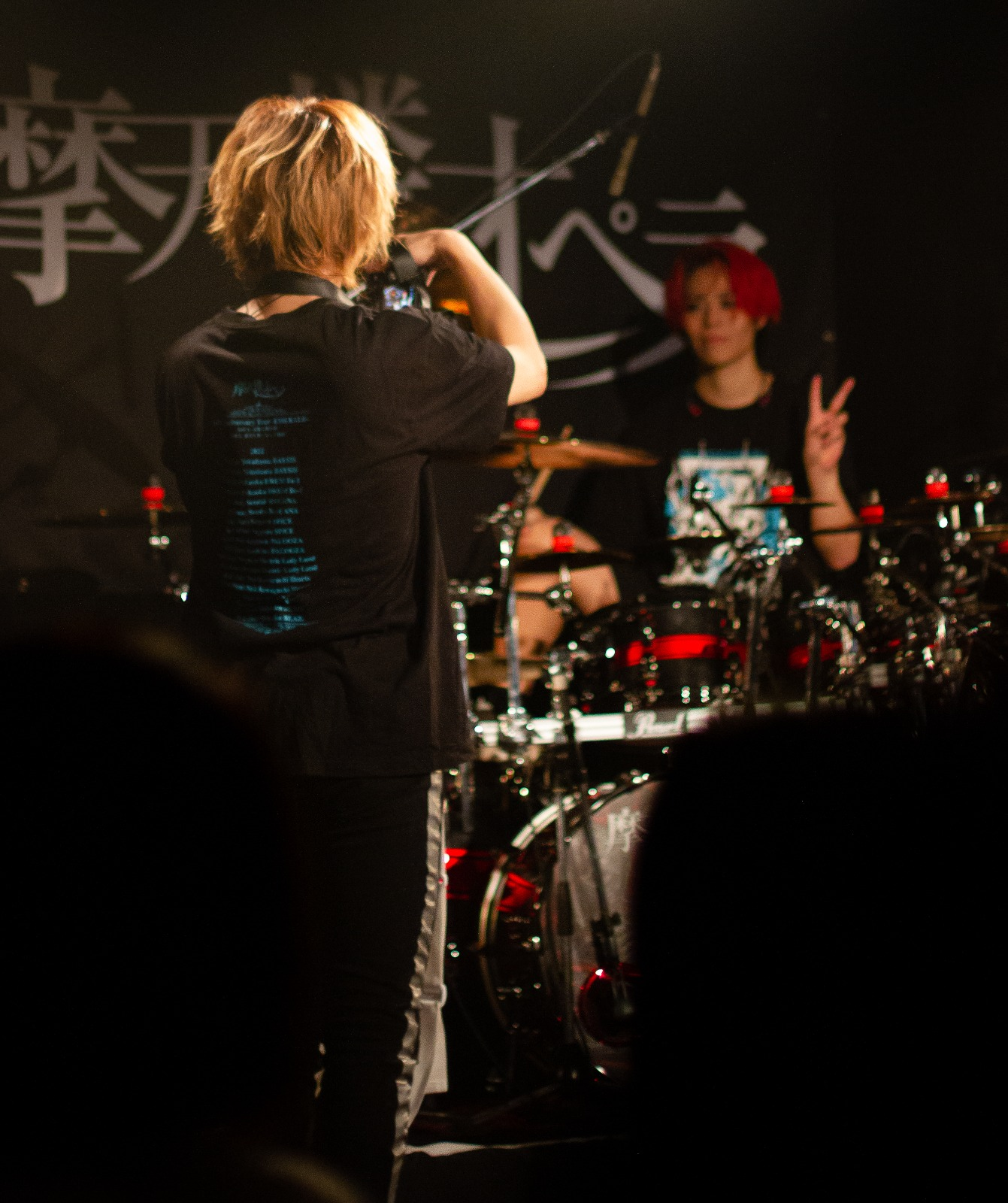 Yo, Ayame and Yusuke are seen picking up their instruments so fans get ready for the encore. Sono asks the audience if they still have energy to continue and the fans put their hands up to show they are ready for what’s to come.

They play alkaloid showcase, the first song they officially released. Fans jump and then start rocking back and forth along to the heavy sound. During the chorus, they open their arms and dance in unison. We can tell it is a nostalgic and beloved song of the band.

Soon after the song ends, Sono turns around and grabs a tour towel, hinting at the next song. 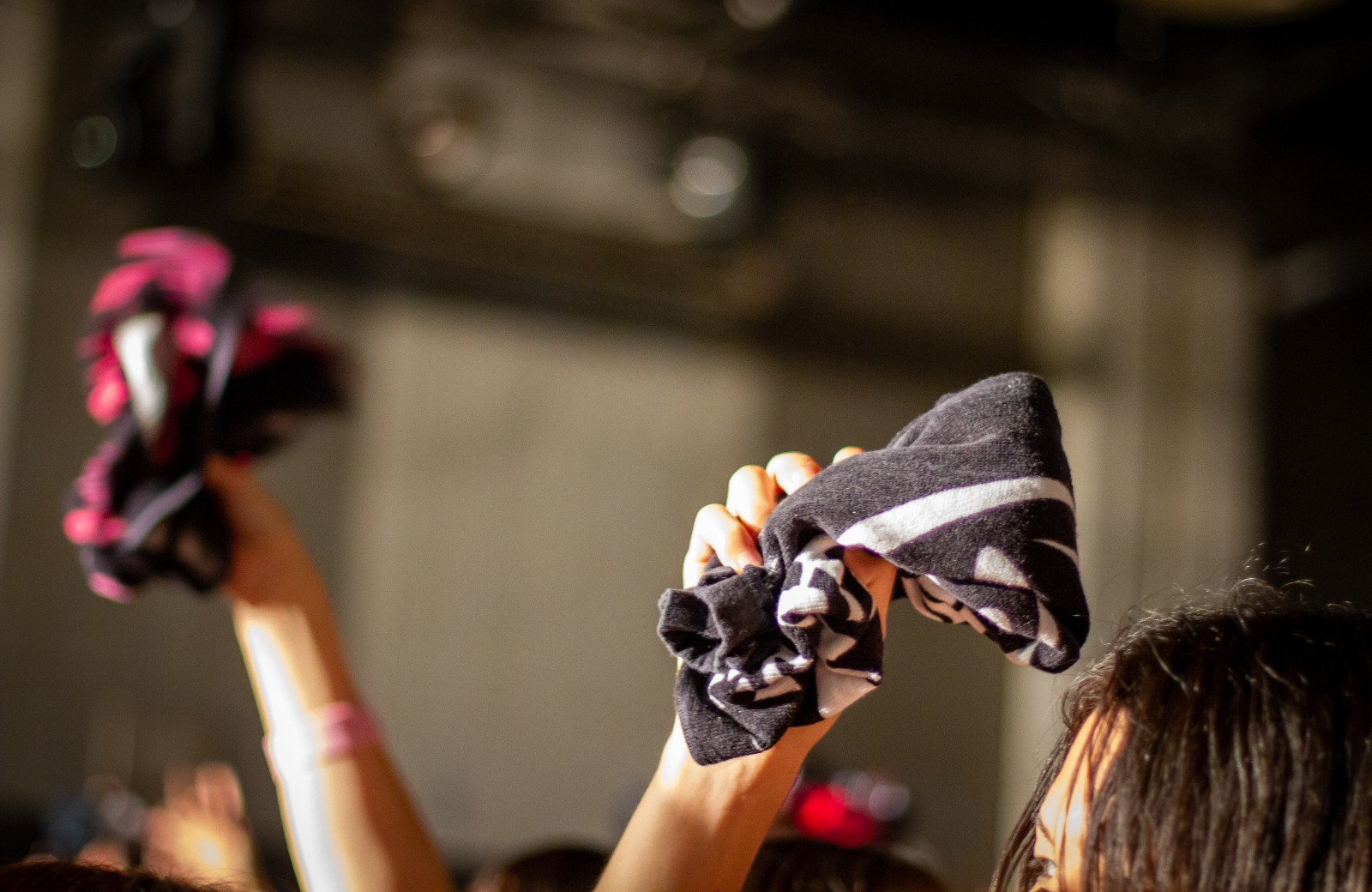 Without missing a beat, fans grab theirs and put them up in the air. ‘Hit like you just don’t care!’ Fans pump their fists in the air along to the addictive, rebellious beat of Cross Counter wo Nerae.

They finish their set with Magnolia, where fans wave at the members and it feels like they bid them farewell goodbye.

Just when we feel like this might be the end, the members start gesturing at each other playfully.

They gleam with excitement as they signal to each other ‘one more song’.

They play Psychic Paradise, a song where fans put their hands up in peace signs during the chorus. During the final part, Hibiki starts drumming much faster and Sono grins as he tries to keep up with the change of beat. Fans headbang with more vigor and when the song ends, everyone in the room looks exhausted in the best way possible.

The members are all smiling when they leave the stage, waving at the fans on their way out.

This first day might have been a love letter to the band’s history and to the fans who have walked along them for it but we, at NIPPONGAKU, can’t help but feel that the electrifying mood floating in the air is a reflection of everyone’s deepest wishes for the history to keep being written. We are looking to the band’s future with excitement; particularly, we are thinking of the immediate future as we cannot wait to see what the band will prepare for tomorrow.

5.Mammon Will Not Die