Today we present… Matenrou Opera‘s special Valentine’s Day concert at Shimokitazawa Shangri-la.
This band has a long history. In fact, this upcoming May 4th, they will be celebrating their 15th anniversary at Otemachi Mitsui Hall.

The technical quality keeps improving album after album. They started with their own unique take on visual kei in 2007, and although their style keeps evolving, it can be said that they have gradually been heading towards a more metal sound which has pleased long-time fans as well as it has attracted a new, curious crowd.
I think no further introduction is needed, as Matenrou Opera are well-known amongst fans of visual kei and well-respected in the scene, and have even toured outside of Japan in the past. 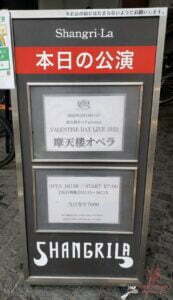 On February 13, in the vicinity of Shimokitazawa Shangri-la, a crowd of fans were waiting to enter the building. Hiding from the rain, they lined up in a queue that reached the basement of the building.
Once we had entered the venue, we all noticed the red lighting, a special attention to all the fans who came to celebrate Valentine’s Day with the band.

The song of joy sounds signals the opening of the concert and the band members arrive on stage one by one, all dressed in the promotional t-shirt of the event.

Once they were all in their positions, Hibiki broke the silence by hitting the drums. The band jumped right in by playing “BURNING SOUL”. Sono lead the audience, as if he were a conductor, while Yusuke and Ayame dazzled with a very power metal style. The fans and the band pumped their fist in the air, gesturing along to the “Carry on!” part of the lyrics, making it an impressively energetic concert opening.


Epic guitar riffs warned us that “WARRIOR” was next on the menu. Here, the band shines in their most theatrical version: first, a zenithal light shot illuminating the stage while Yo’s intricate bass playing left the audience engrossed. Shortly after, the lights started to flickering the more we heard Hibiki on drums. It was a scene that would have fit right in an art book.
They shout out “Shimokitazawa arigatou!” while the fans clapped to greet them back. The members thank the audience for the last year and for the one that has just started.

After a short break, they pick up where they left off and play “Sacrifice“. In this one, we can already hear Sono‘s characteristic vibrato, which is loved by so many.
Ayame makes a rocking pose with the keyboard, as if he was playing the guitar, while exchanging places with Yo. The fans bow to the band.
This song is perfect as Matenrou Opera‘s introduction, as all members get their moment in the spotlight to show off their skills. The song ends with the audience and the band making the sign of the horns.

The atmosphere transforms into that of a pure metal band concert with “INDEPENDENT”. The heavy instrumental showcases a more aggressive side of the band.
From the back of the room, you can see that the fans are dancing and having a good time while frenetic rhythms continue to unfold. We all enjoyed the epic guitar solo, which made everything better, like icing on a cake. Sono starts to sweat, as it was an intense song….

Now it’s time for “RUSH!“.
If the previous song had already been raising the tension, this one took the event to the next level. Plus, Matenrou Opera managed to find ways to make the performance interactive during COVID-19 times. For much of the song, everyone on the stage was helping Sono with back vocals, and the fans, who are not allowed to speak, responded by jumping up and down and clapping their hands.


Crimson stage lights give way to “Kumo no ito“. This song gave us no respite either.
Halfway through the song, the spotlights quickly dazzled the audience to capture their attention and made us focus on the solo that Yusuke was giving us, the most metal guitar riffs we had heard so far.

It was the turn of “Adult Children“.
In this song, they play so fast that I couldn’t follow the notes with my eyes!
In this song, Yusuke also has his moment of glory. During the guitar solo, the fans opened their arms towards him as a sign of gratitude (this is called ‘saki’, another type of furi). He seems to have gotten a great reception from fans, despite being a support guitarist for only a little over a year.
Sono says “Thank you!” in English and leaves the stage.

The rest of Matenrou Opera members remain in their positions because the next song on the setlist, “SYMPOSION“, is an instrumental track.
They all play the instruments in the center of the stage and duel each other.
In this song the audience becomes the voice of Matenrou Opera, clapping their hands along to the melody. 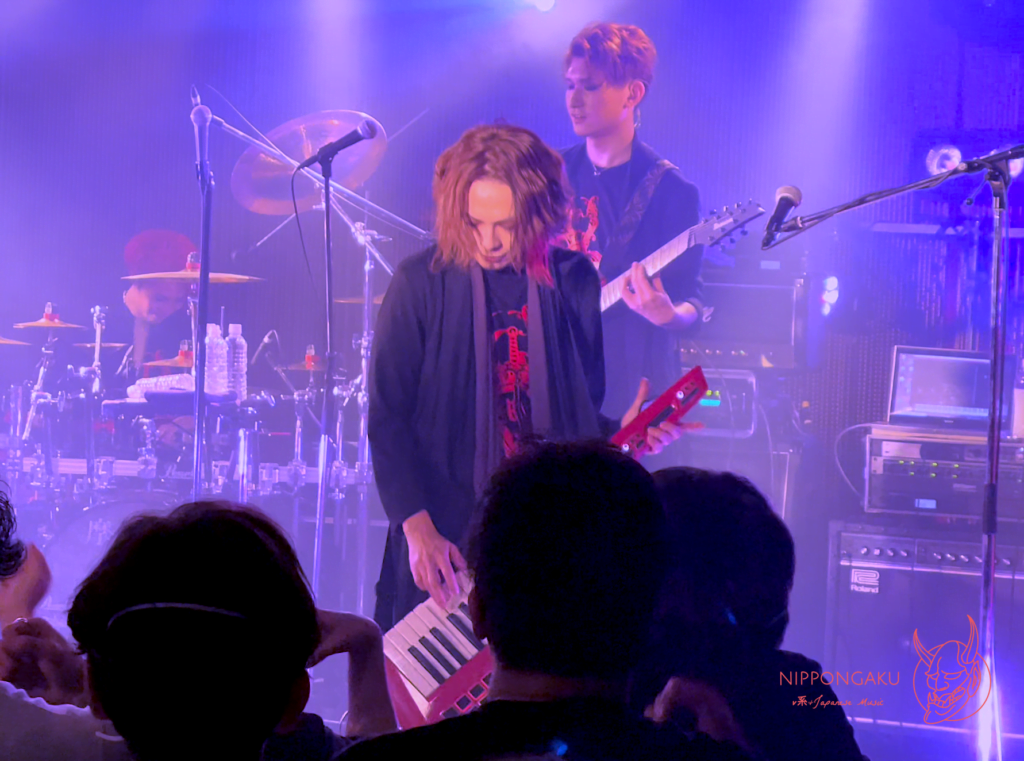 They hand over the melody to Sono who returns to the stage at the beginning of “Eternal Symphony” which, amongst those chosen for the event, is probably their best known track overseas. The low tone in Sono‘s voice certainly lends an air of visual kei reminiscence to the moment. There is a sense of group euphoria and the whole audience moves freely… It really felt like a concert like those in Europe!
Sono, who’s standing in the middle of the stage, is bubbling with energy while Ayame plays his mythical keyboard notes.

Continuing with nostalgic songs, to everyone’s joy, “GLORIA” played. This one is also quite well known and is probably one of their most famous songs in Japan. The room quickly fills with blue and white as fans turn on their official pen lights (glow sticks).
For the first time since the beginning of this concert, we can see the audience do furi (coordinated fan dances during the performances).
It’s easy to see how much Sono enjoys the song and he even sings without a microphone.
We couldn’t help but think again that he has this image of a conductor directing a whole orchestra! 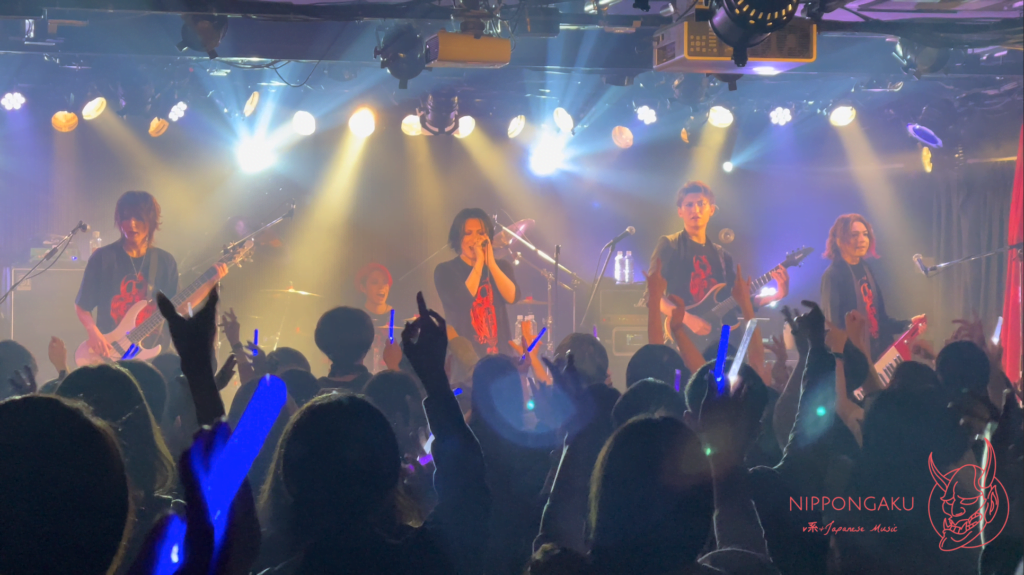 There is a short break. They take the opportunity to regain some of their strength and drink some water.
They ask the audience if they are enjoying the concert and thank them for the energy they are giving.
Ayame speaks a bit and shares his feelings about the situation they are living in, with the pandemic.
Sono says that he has a lot of ideas in mind, and that he really enjoyed being able to include many older songs in today’s setlist.
They say that it’s time for some romantic songs, reminding us that we had all gathered to celebrate Valentine’s Day.

“Beyond The Sorrow” begins shortly. Sono’s voice returns to high pitched tones, giving the performance a romantic and gallant air.

Without any prelude, they continue with “Owaranu Namida No Umi de”, another deep song, but with a much harder beat. The whole room is dyed blue, like the sea, alluding to the title of the song: “Sea of endless tears.”
It looked like a musical battle of intensity between Hibiki’s intense drumming and Yusuke’s intricate guitar progressions, the fans bringing out the glowsticks again to encourage the duel. Sono, fully immersed, couldn’t resist playing air guitar.

The last song before the encore was the epic “Hakanaku kieru ai no sanka” in which Ayame performed so well in the middle of the stage that Sono could not resist clapping for him.
Once finished, the members say goodbye and Matenrou Opera leaves the stage.

There is an immense silence until the fans decide to applaud, asking for the encore.
After a few minutes, the members of Matenrou Opera return to the stage, this time not wearing jackets as they must have been feeling hotter and hotter from so much movement.
Ayame congratulates both the fans and the band for the great synchronicity they had.
They remind us of their next concert dates, such as the counterpart of Valentine’s Day in Japan, White Day (on March 14th, when men give chocolate back to women, who traditionally give it on the traditional February 14th).
The date chosen for Matenrou Opera’s White Day event is March 13 at the same venue, Shimokitazawa Shangri-la.
On another note, Yusuke, support guitarist of the group after their previous guitarist’s departure in 2020, is introduced and the audience offers him a warm applause to welcome him.

They also tell us that they have several cameras installed on stage, one placed near Hibiki and another on Yo’s left. Sono asks jokingly why he doesn’t have one recording him from above.
After a relaxed chat about cameras, they recall a couple of anecdotes from their Christmas fanclub concert and put on their instruments to get back to the action.

They surprise us with “Kurenai”紅 a cover of one of X-JAPAN’s most beloved songs… But with the characteristic symphonic contribution of Matenrou Opera.
Sono‘s voice perfectly captures the essence of Toshi (vocalist of XJAPAN). If at some point, Toshi decides to take a vacation… We already know who can take over! (laughs)

The encore continues with “Psychic Paradise“, one of their staple songs. The whole room basks in its festive and powerful melody, as fans are headbanging.

Without unnecessary transition, the Valentine’s Day event closes with “The World“.  This last song is led by Hibiki on drums It has a calmer rhythm but it is still cheerful, perfect to bid us farewell and to leave us with a smile. The fans bring out the glowsticks for the last time.
Sono, ecstatic, lets the microphone hang from his neck, as he opens his arms to gives a cheer of gratitude to the audience.
The audience applauds and Matenrou Opera leaves the stage as an upbeat tune plays in the background.

There is no doubt that the attendees left with a very good aftertaste in their mouths and that they will be eager to attend the White Day event to see the two-day event through to its completion.

Don´t forget to check out our interview with Matenrou Opera VALENTINE DAY 2022! 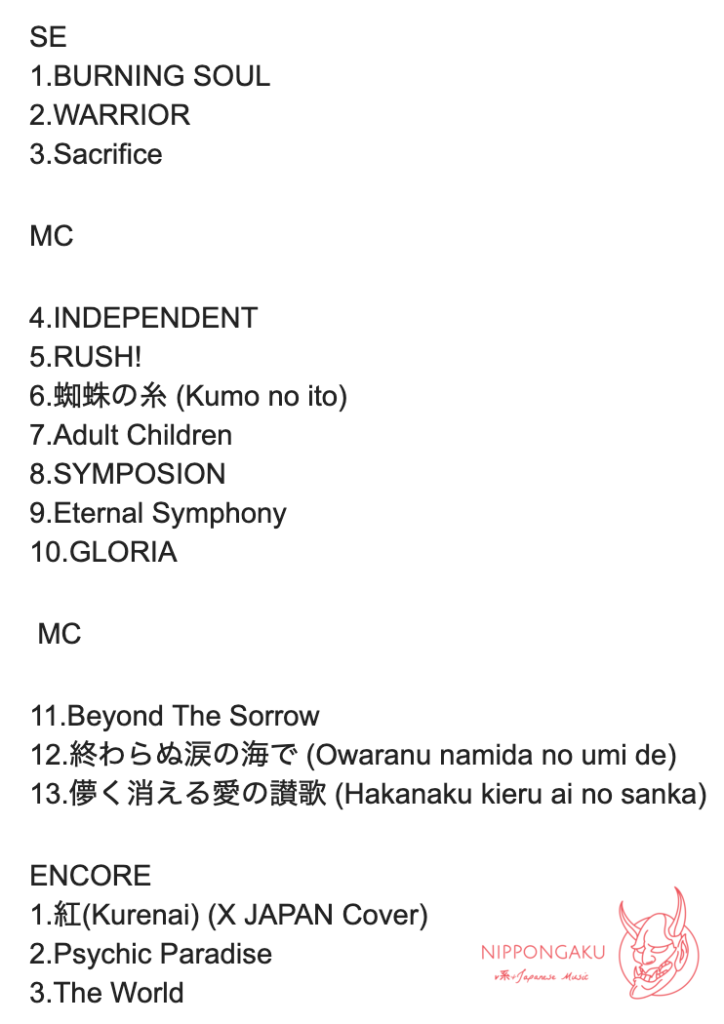 nice stuff you have posted here.. it seems you have put great effort in writing this