At 18:10, shortly after Yamitera‘s performance, the curtain opened and all the members of NICOLAS were already standing in their positions.
The look chosen for the occasion was a visual kei twist on Japanese school uniforms.
The first thing to catch our attention was SAKU (Vo.)’s look. He had his arms wrapped in bandages and on his face was painted the kanji for 鬼 (Oni, demon), probably a nod to the name of the event (Yami To Oni ヤミトオニ). 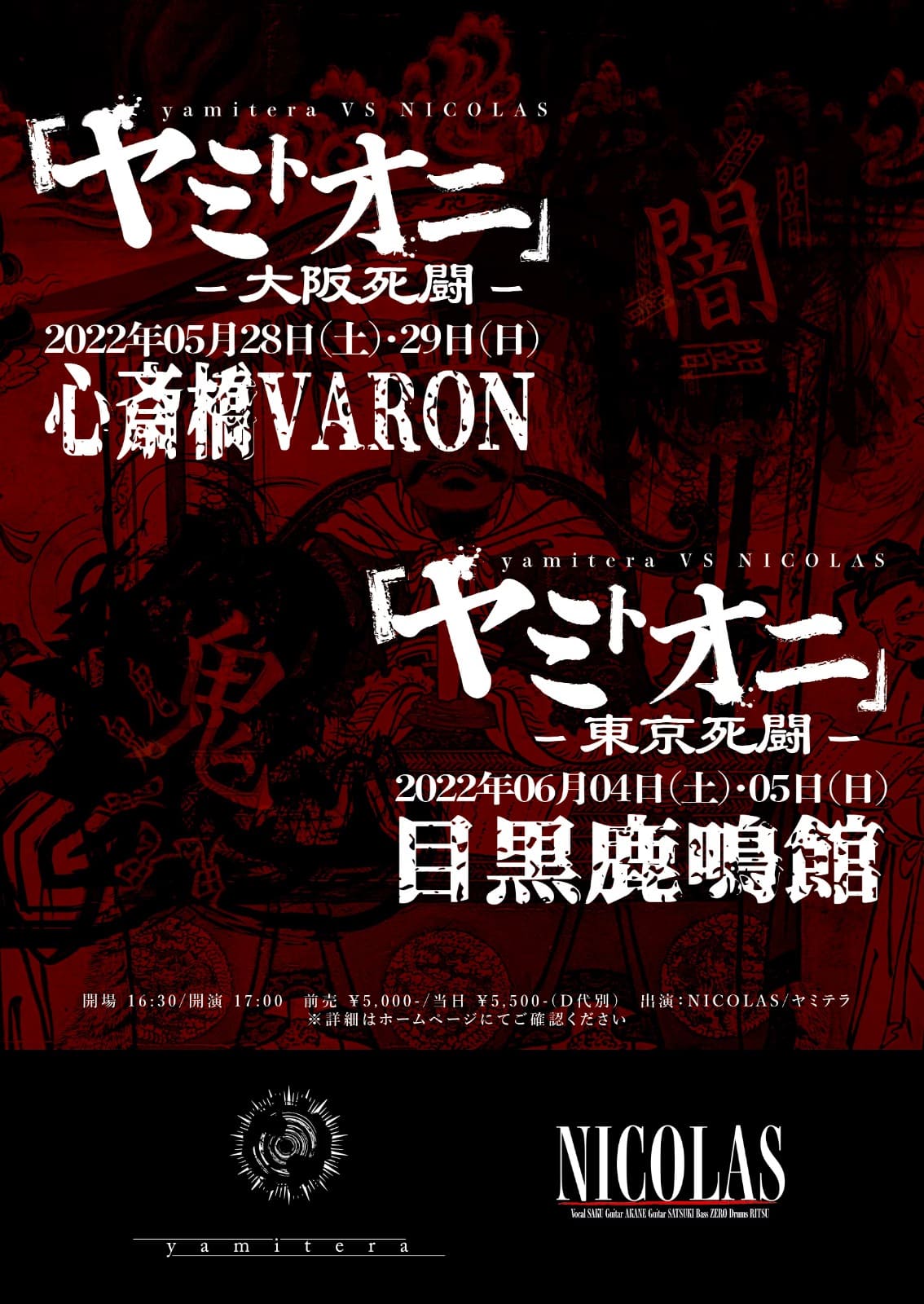 Also, behind him, the guitarist was wearing the t-shirt made for Shinsaibashi VARON’s ninth anniversary (2021).

Without even a greeting, NICOLAS opened the concert with the mythical “Tenjou tenge yuiga dokushou”
Even while wearing their mask, we could see the excitement that took over attendees when they realized that for this live, the band had chosen to play Gossip songs instead of NICOLAS songs.
Just like with Yamitera, the first member to stand out to us this time was Zero and his charismatic bass playing.
The fans raised their hands towards the sky repeatedly, alluding to the theme of the song (“Heaven on Earth”). As the members played the intro to “Sema Shin-shō”, SAKU held his chest like he was in pain and gestured to his heart. Many fans still looked stunned as the band played Gossip song after Gossip song.

SAKU made a short monologue in the middle of the song before going back to singing in a high-pitched voice. The song was so frantic that AKANE (gt) and ZERO also participated in the chorus, adding depth with their lower voices. 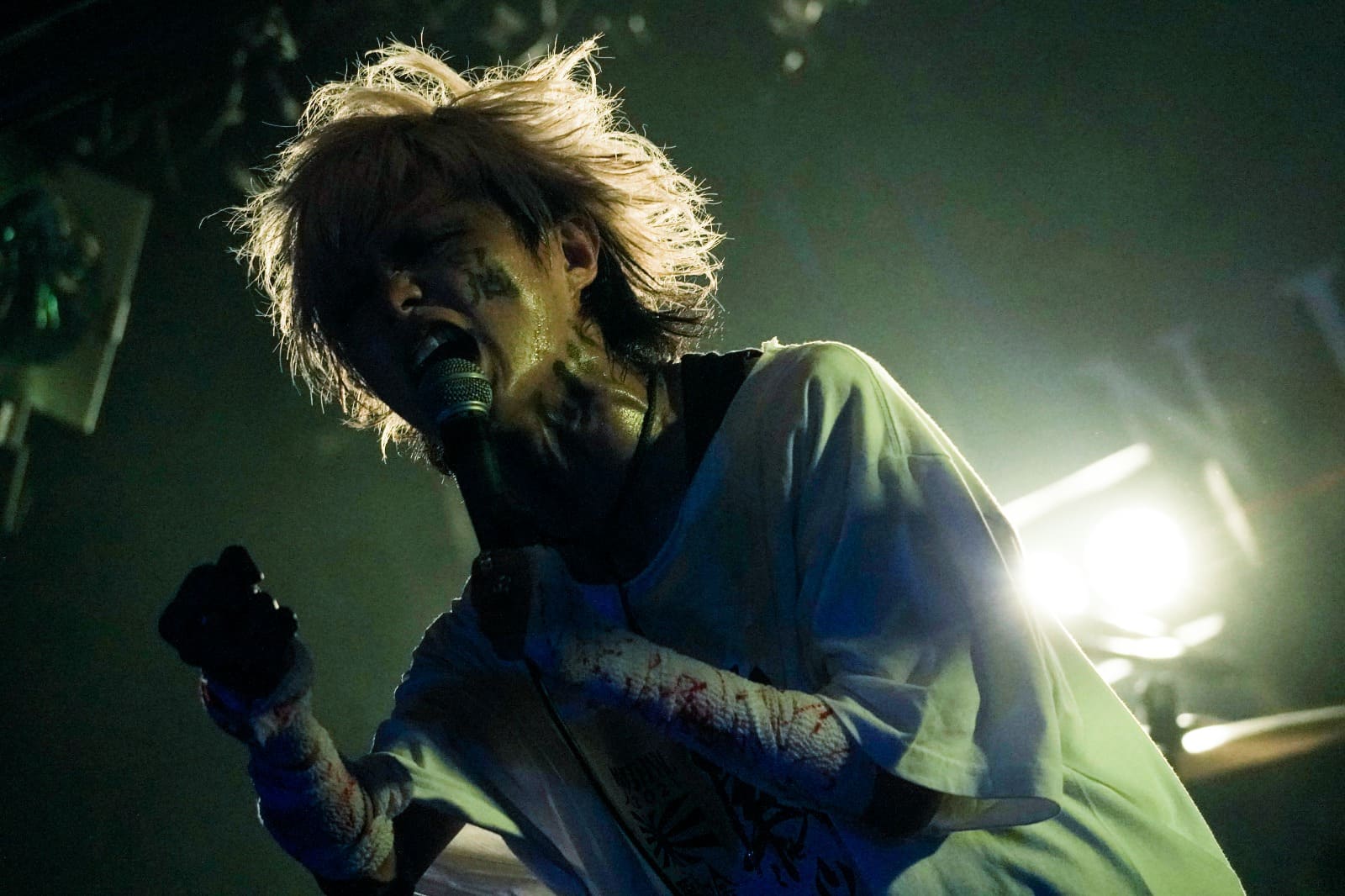 Before starting “Menkai shazetsu”, SAKU checked on the members of the audience, asking us if we were feeling ok. Getting to hear Gossip’s sound was a delight for fans, especially for those of us who are fans of the visual kei releases of the mid 2000s.
We really felt like we had traveled back in time… It must have been a big surprise for many fans who have been fans of the members since their days as gossip. A proof of this was that from the back of the room, we could see some fans trying to recall the furi and consulting with each other about the order of the movements (laughs).

SATSUKI broke into a guitar solo that made the room calm down and watch with admiration.

However, SAKU kept the tension going and took a deep breath into the microphone. He seemed to be fighting for his life while the bandages were falling off his arms from moving so much.

One of the most amazing moments of the concert was during “Baka Aho Manuke Banzai!!!” Right at the start, SAKU, referring to the title of the song (“Stupid, dumb, stupid, imbecile, Hurray!!!”) started calling the audience “dumb” in different ways and then finished his friendly taunts with the iconic Japanese cheer “BANZAI!!!”.
The sound followed a very familiar structure in j-rock. This time, the fans showed no doubt with the furi.
Suddenly the whole audience turned around to follow the concert with their backs facing the stage.
We, at NIPPONGAKU, were speechless; it was the first time we had witnessed something like this! It is when one sees things like that that it becomes undeniable that gossip (and NICOLAS) is a reference when it comes to the current visual kei scene!

The mood shifted dramatically during “Dareka-san ga yanda”, as the lyrics of the song told the story of a murder. AKANE and SATSUKI‘s thrilling guitar rhythms enchanted the audience, the soundtrack to the horror movie Saku was narrating. 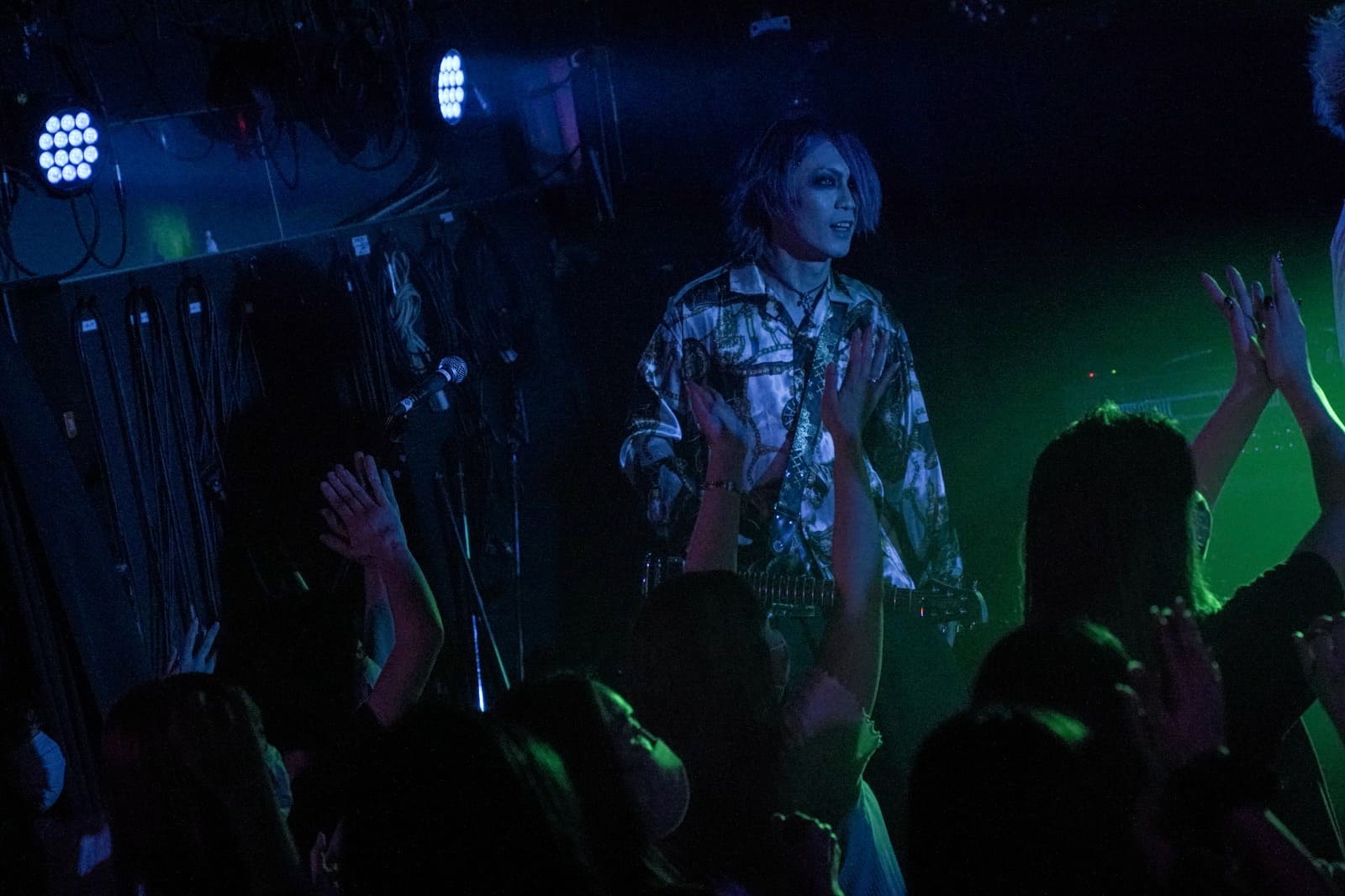 Again, the interaction between fans and band was unexpected. SAKU inspected carefully the audience to see if anyone moved as he turned around… it looked like they were playing a game of Red light, Green light.  The music then and the members of NICOLAS talked a bit among themselves.
SAKU turned and spoke into the microphone, claiming that the one who was having the best time that day was SATSUKI. The guitarist started to sing, to show his enthusiasm, and the music came back on.
SAKU was in charge of closing the song with an intense guttural scream that left everyone in the room frozen for a moment.

Due to COVID-19 prevention measures, it is still not possible to talk or shout at the concerts, so between songs the fans used rubber chickens to communicate with the band.

During the MC, they commented that although yesterday was a lot of fun, today was even more fun. The members all took off their jackets, showing their resolve in giving it their all despite the heat and fatigue.

The lights turned purple for “Komorebi”, a Japanese word to define the concept of “sunlight filtering through the leaves of a tree”.
NICOLAS touched our hearts with this heartfelt ballad. Fans remained motionless as the lights bounced off the disco ball in the center of Shinsaibashi VARON’s ceiling.
Even though the lyrics of Komorebi are somewhat melancholic, SAKU took the time to look at each member of the audience. We felt like he was trying to heal us from all the pain we were feeling at that moment.
On top of that, RITSU played the drums with such passion that we felt like he was giving us the power we needed to face the struggles of daily life. It was time for them to let us hear something from NICOLAS, so we took a break from the gossip setlist to listen to “Haironpa” and allow the members to be introduced one by one.
Fans clapped non-stop as SATSUKI, ZERO, AKANE and RITSU took turns standing on the center platform, ending with SAKU who self-proclaimed himself “the representative of NICOLAS.”
ZERO had such a good time in this song that he ended up playing while on his knees, huge smile on his face. The atmosphere in the room was very festive.

After this small break, the band ‘switched’ once again, from NICOLAS to Gossip this time. with “Kubi Chonpa” (“Cut Neck”).
It has already been mentioned that NICOLAS/gossip has some of the most interactive furi, so as expected, when SAKU gestured to cutting his neck, the audience went crazy and started to shake their towels with NICOLAS’ logo.
It’s a pity that the audience couldn’t sing or speak, because this chorus felt like it usually invited the fans to sing along!
Everyone in VARON was dancing to the rhythm of “Toaru aidoru otaku no ijōna aijō” It seems it was the song that the fans enjoyed the most, there was even a mosh! (don’t be alarmed metalheads, it was a visual kei style mosh… spinning around (laughs)).
The spotlight stopped on RITSU, prompting him to drum even faster. From the back of the room, he looked tiredless.

The intro of “Kimi ga anoyo ni” was a distorted version of the Japanese anthem “Kimi ga yo” .
This was undoubtedly the song where we felt the strongest influence of traditional Japanese symbolism. To complement the performance, the members in the audience took out their official NICOLAS fans and waved them along to the melody.

SAKU announced that the next song would be the last one: “Manji!” 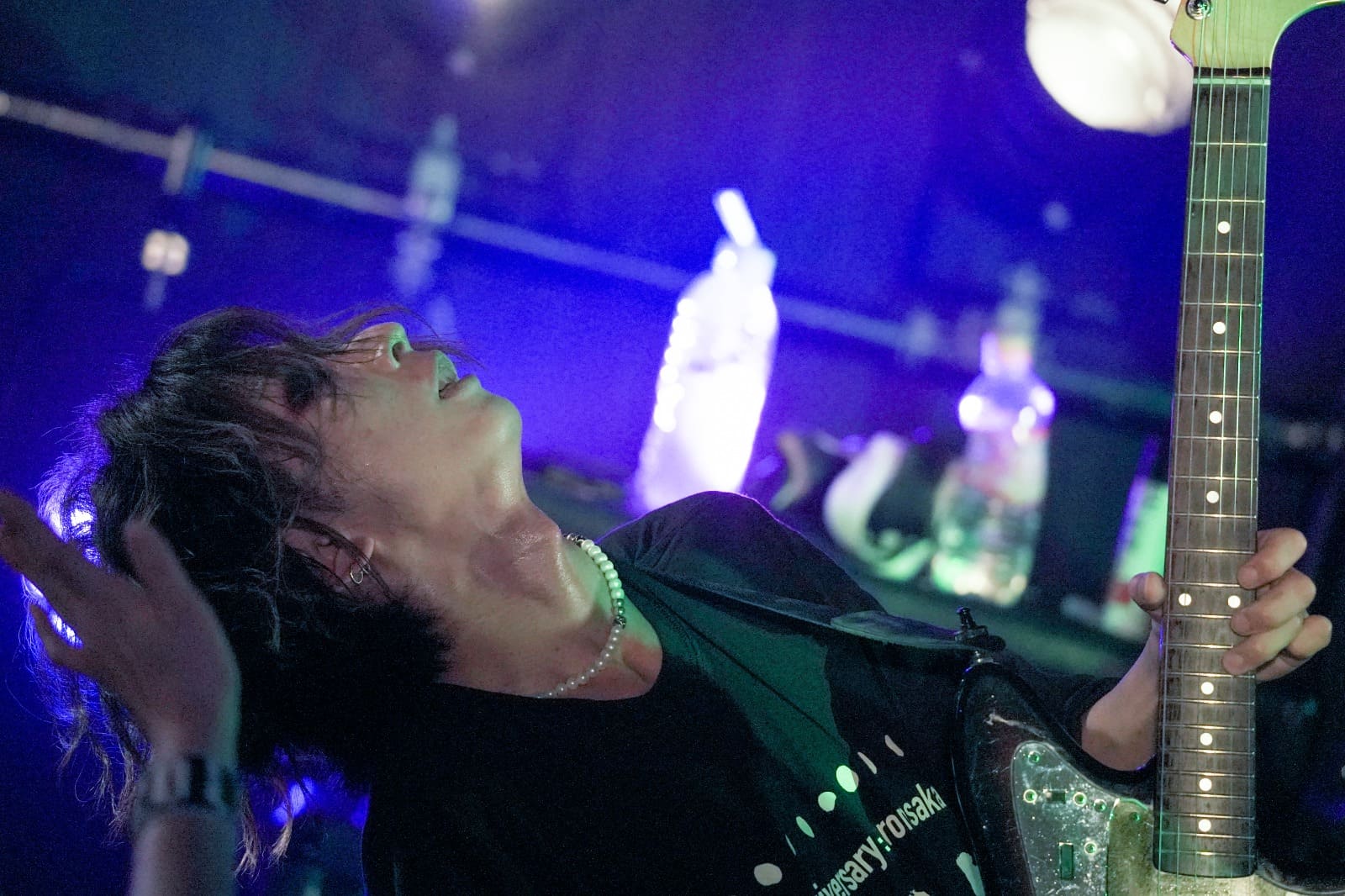 The band and the audience started jumping in unison! Just before the last headbanging part, SAKU shouted “thank you!” and everyone jumped until RITSU closed the song by hitting the last few notes.

NICOLAS left the stage. Fans didn’t wait very long until they brought out the rubber chickens and made noise to ask for an encore.

After a few minutes, SAKU returned. This time, he was wearing sunglasses and a fashionable jacket which was in fact a hoodie they sold during the previous tour.
He told us that the two days had been great. He also apologized to Yamitera’s fans for the way he talked and explained that the band usually communicates with the fans in a very familiar manner, as if they all were lifelong friends.
To explain the setlist choice, he joked that the band considered themselves a franchise like “Disneyland” and that was why they had decided to play gossip songs that day. 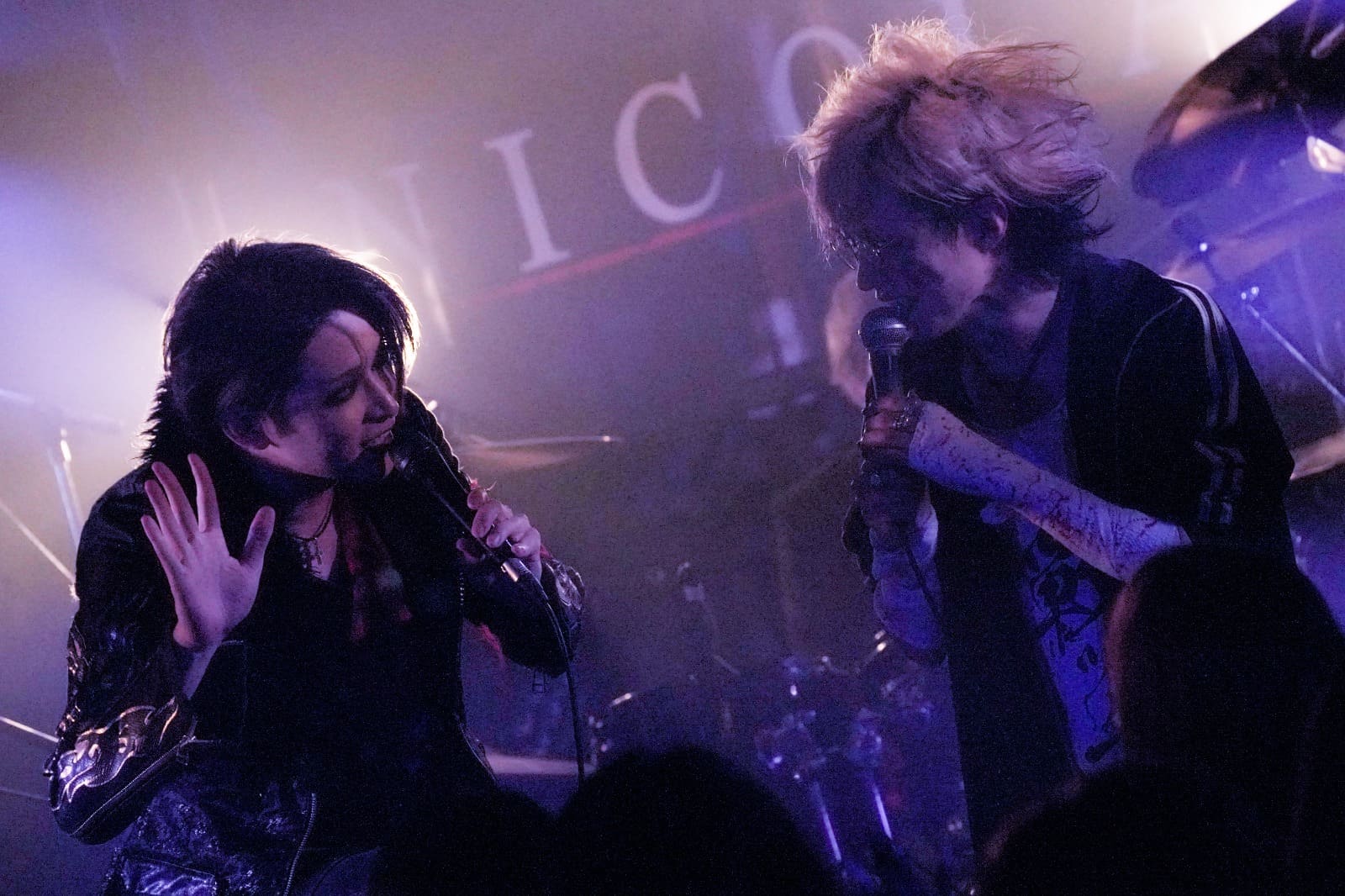 SAKU‘s speech was interrupted by RiNa (Yamitera) entering the stage.
El discurso de SAKU fue interrumpido por RiNa (Yamitera) entrando al escenario.
He was well received by NICOLAS, so much so that they introduced him as if he was a member of the band. Minutes later, Minato and Junju also appeared on stage.

During the course of “Miyuki” more members of Yamitera and NICOLAS joined them.
Once both bands stood on the stage together, they decided to play Gossip’s  “-SAKURAN-“ together to say goodbye to Shinsaibashi VARON. 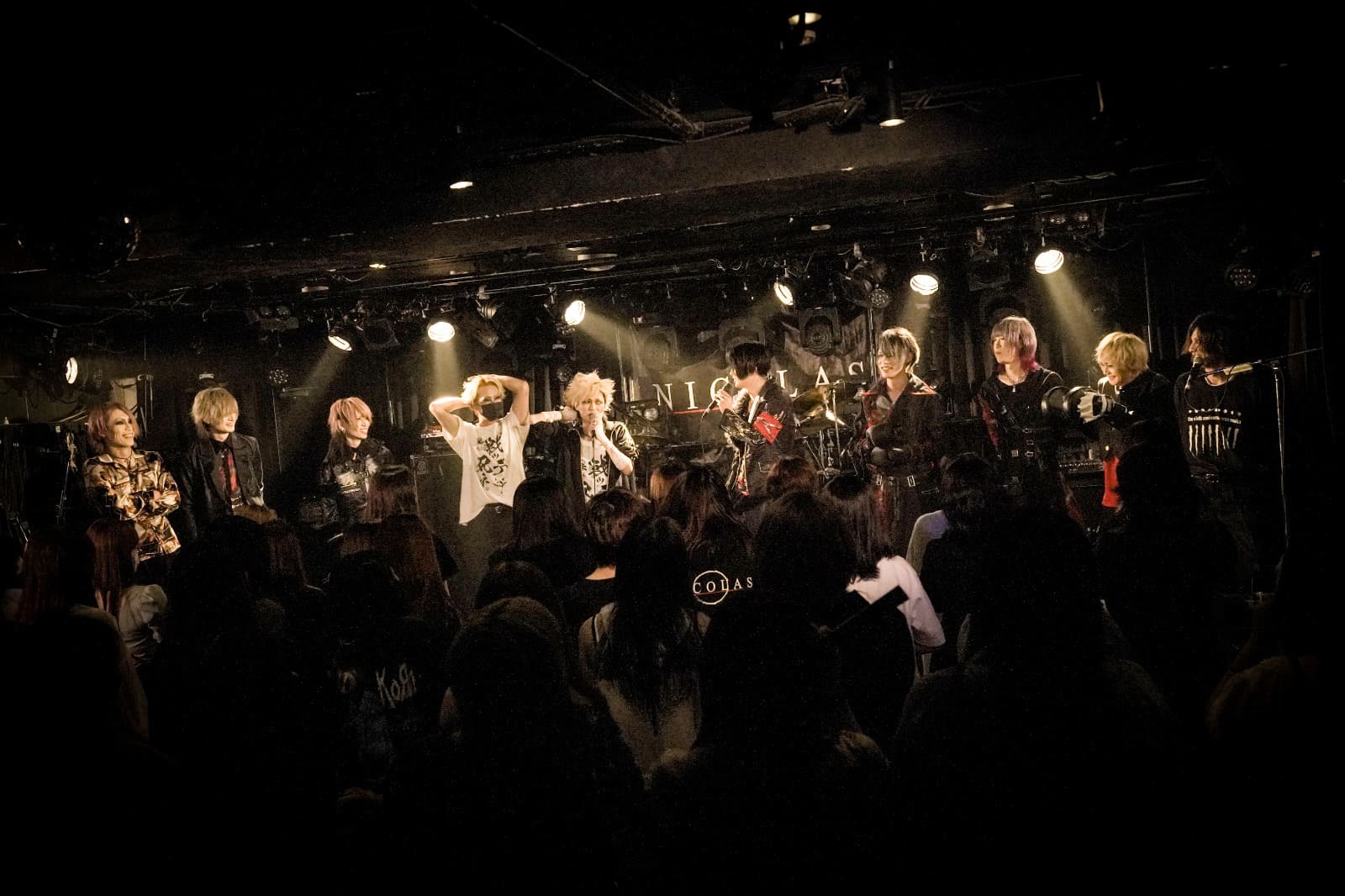 The relationship between the two bands was surprisingly good. They successfully created an atmosphere that was fun for all the members of the audience (us included). It almost felt like a private after party.

We were having such a good time watching the symbiotic interaction between both groups and the fans. One moment that struck us as particularly funny was SAKU and RiNa‘s attempt to harmonize their voices before the song. 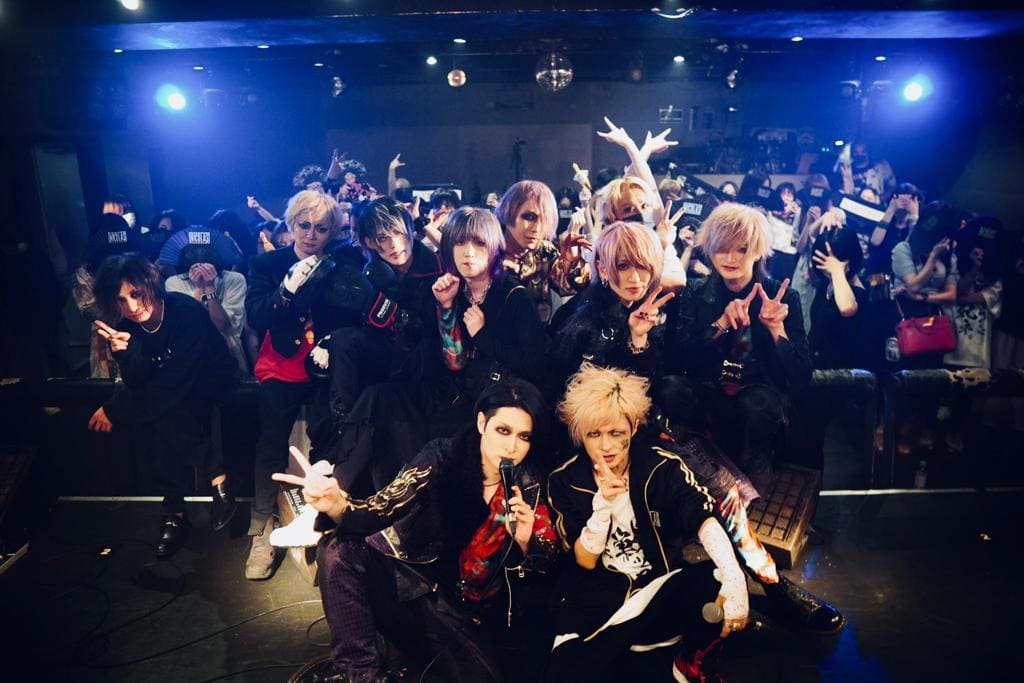 The live performance was worth-remembering, so the members suggested taking a group photo so that no one would forget they were there that day.

After this, the lights came back on. Just before closing the curtain, SAKU expressed that he wanted to dedicate a few words to Yamitera: “It’s easy to give up; the hard part, however, is to stay on the path you’ve chosen for yourself and to keep fighting”, referring to Yamitera’s speech at the beginning of the show.

It was an emotional moment that left everyone with a hopeful smile. The bands left the stage and fans waved before making their way to the merch table, lining up to buy goods and cheki.

Before you go, don’t forget to listen to the preview for EROGURO, NICOLAS’s new mini-album

Next week, we will have the chance to sit down for an interview with the members of NICOLAS.
Do you have any questions for them? Leave them in the comment section below! 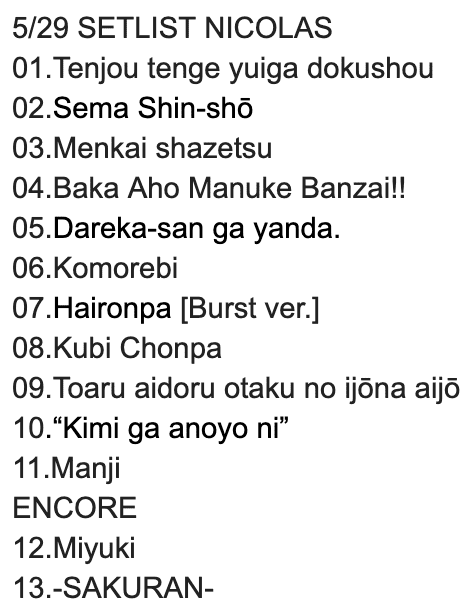