This time we had the pleasure to attend the first date of “Yami to Oni”, the two-man (two bands in the same event) tour headlining Yamitera and NICOLAS. 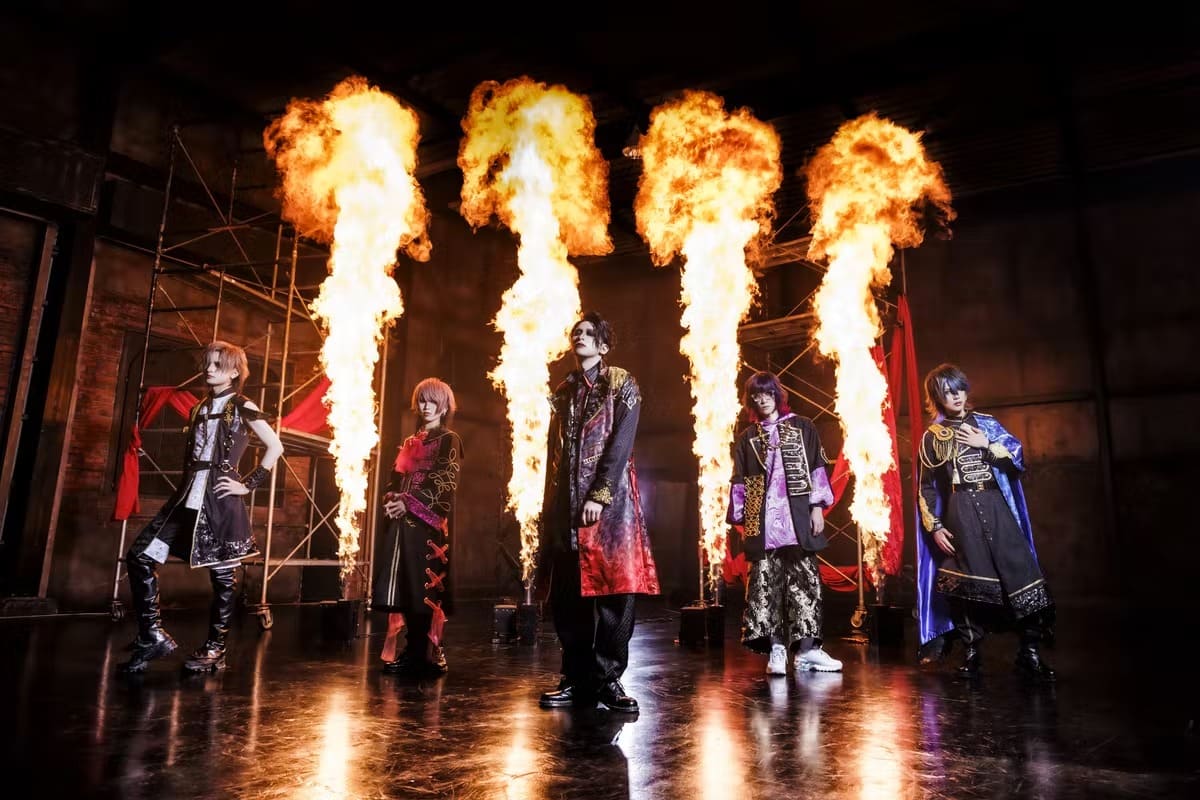 Yamitera (previously known as Hangyaku no 83 and Gedou Hangyakusha Yamitera until they settled on their current formation) is a rock band heavily inspired by traditional Japan, both musically and aesthetically. Their inspiration manifests through their concept as a band as well as the cover art of their albums and styling of their costumes.

On the other hand, NICOLAS is a band whose sound fluctuates between rock and metal, which has become the norm among current underground visual kei bands.  After the dissolution of Gossip (short for Dainippon Onitanjigumi Akudoukai ni Senkyosare GOSSIP, the original name they adopted in 2015) in 2018, the members decided to open a new, more mature chapter in their professional career and took the name “NICOLAS”. 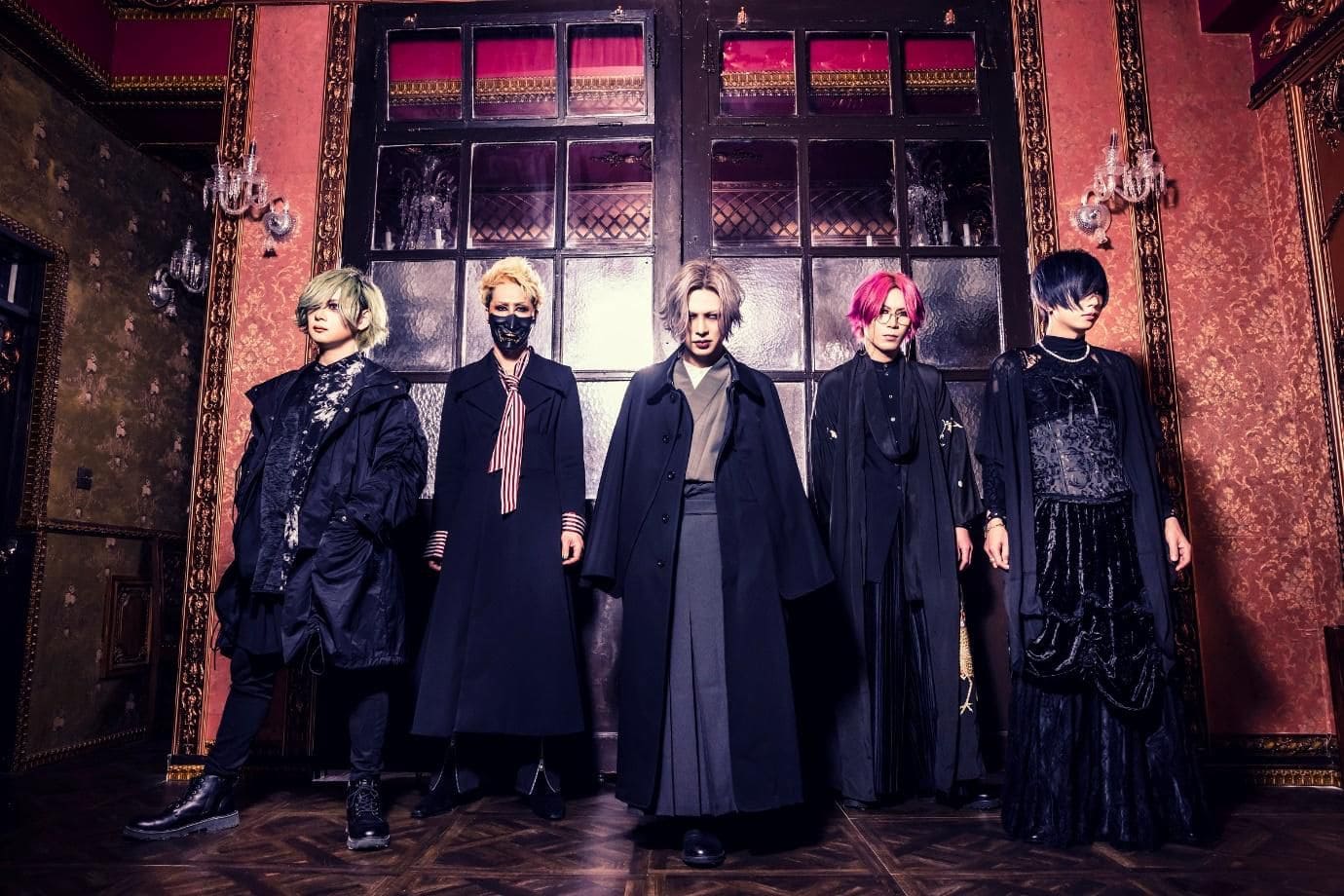 This being said, If you are a fan of gossip, we recommend you read this report until the end because this concert was full of pleasant surprises for us and fans alike!

Both bands have several points in common. The first notable thing is that they are both bands which have gone through different phases to finally become who they are today.
Both bands also often do this kind of tours where they collaborate with other active artists in the scene, such as bands VIRGE and Gravity. Yamitera and NICOLAS share their inspiration and love of traditional Japanese style but also incorporate more contemporary themes (such as menhera culture) into the lyrics of their songs and the themes of their MV (promotional videos) while still keeping their own unique style.

Going back to the details of this tour, two dates were announced for it: one in Kansai (Osaka), and the other in Kanto (Tokyo). The place chosen for the start of the tour was Osaka, specifically at the livehouse known as Shinsabashi VARON.
This is not NIPPONGAKU’s first time at this venue. We already claimed that this venue is one of the best in Osaka if you are looking for a livehouse that is conducive to a close, warm atmosphere between artists and fans. You can check out our mention of it by reading our live report for Fukuro.
On the other hand, the Tokyo venue probably also has a sentimental value for NICOLAS, since Meguro ROCKMAYKAN is where they had their first concert a few years ago. 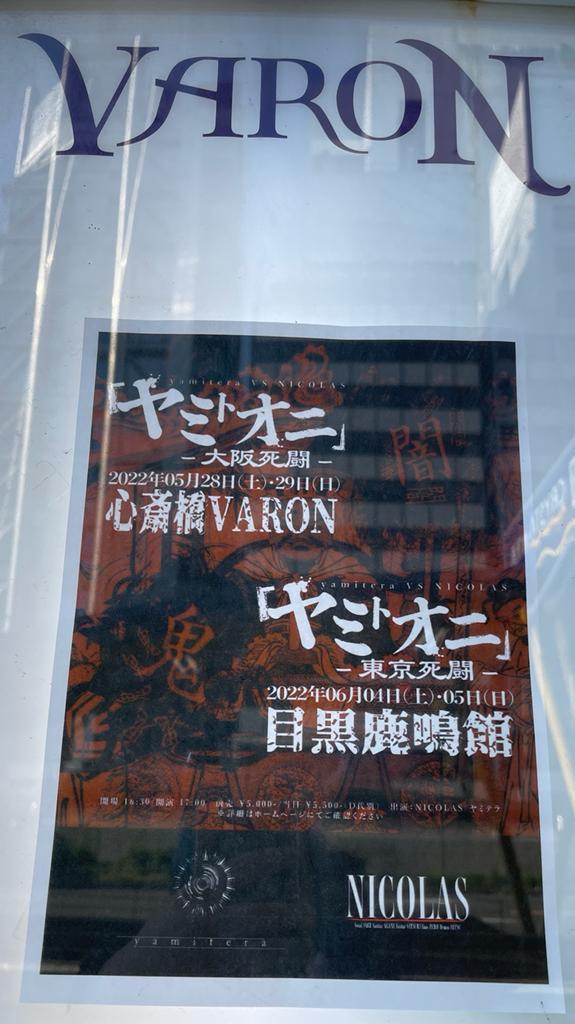 At 17:30, the sound of a door creaking broke the silence in VARON, followed by epic music that made all attendees raise their arms to welcome the band as they took their positions.

To open the event, Yamitera chose “Kudarane Sekai”, probably a fan-favorite based on the audience’s reaction. As soon as the first notes could be heard, Minato‘s bass resonated strongly in the room and the fans jumped and clapped along with the music . 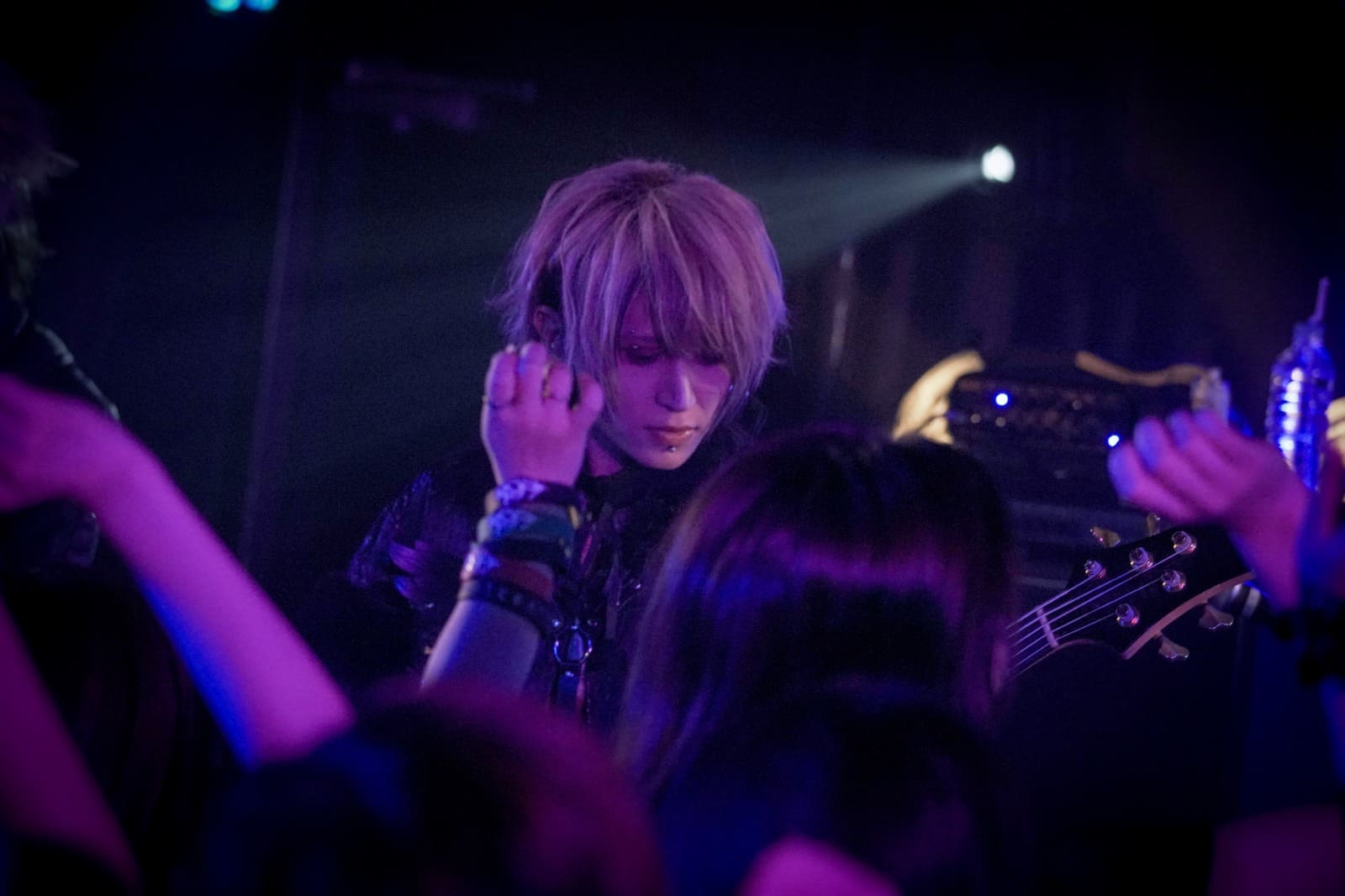 RiNa, who got more and more excited by the second, responded to the audience’s energy while standing in the center of the stage. As he rapped along to the track, he gave us the image of an instructor in a fitness class. Smirking, he even asked the audience  “Are you ready?”, like he was warning us in advance that we were going to sweat during the concert (laughs).

And he was right. The next song on the list was “PARADOX”. The whole room headbanged in unison!

The members of Yamitera did not hesitate to join in the headbanging while the lights in the room flickered. From the back of the room, it looked like we were watching all of this unfold in slow motion.

Those attending Yami To Oni’s event had the opportunity to hear some great songs like “Chemical Dance” from their third mini-album “Haiteiraoyue”.

This was the second consecutive day they played in Osaka and it was much hotter than the previous one. Still, during the MC, RiNa challenged us to make the room even hotter and to turn Shinsaibashi VARON into a “sauna”, to which the whole audience started laughing.

RiNa was very friendly during the MC and naturally created a very welcoming atmosphere for Yamitera’s fans and NICOLAS’ fans alike. It was a curious and refreshing thing to see, as it contrasted strongly with the ‘tough guy’ persona he put on when he’s performing.

RiNa, going back to his role as a fitness instructor, taught us the furitsuke for “Saraba Rock”. The audience had a great time trying to keep up with the dance during the song. Luckily, the chorus’s lyrics allowed even first attendants to follow along easily. 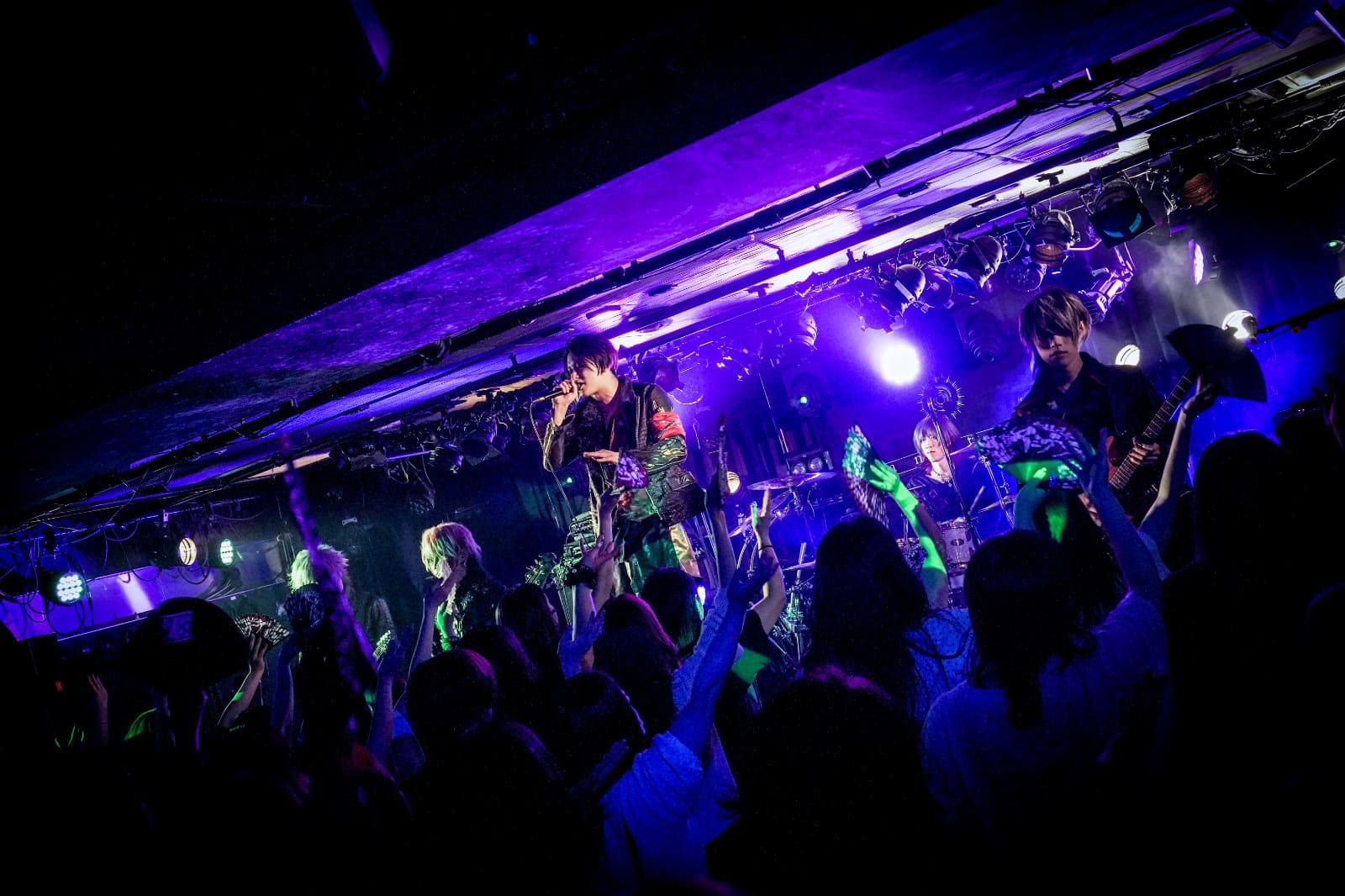 The tension reached its climax with “BA.KU.TI”. ShuKa joined RiNa on backing vocals as J ‘ω’ ²‘s drums resonated loudly, like a war call!
During this song, we witnessed another one of those moments that are bound to happen at any self-respecting v系 event: fans pull out their band towels and wave them around as part of the furi.

To give us a breather after so much movement, RiNa told us a bit about Yamitera’s history as a band and their future prospects. As a band, he said, they wish to always provide their audience with quality performances. He explained that they are working hard to keep the same energy they have shown since their beginnings and that they hope to keep improving concert after concert.
He also thanked their fans for their support and said that he’d like to return the favor by encouraging them to ‘fight’ and shape their own destiny by pursuing all their goals in life, the same way the members were doing in Yamitera. 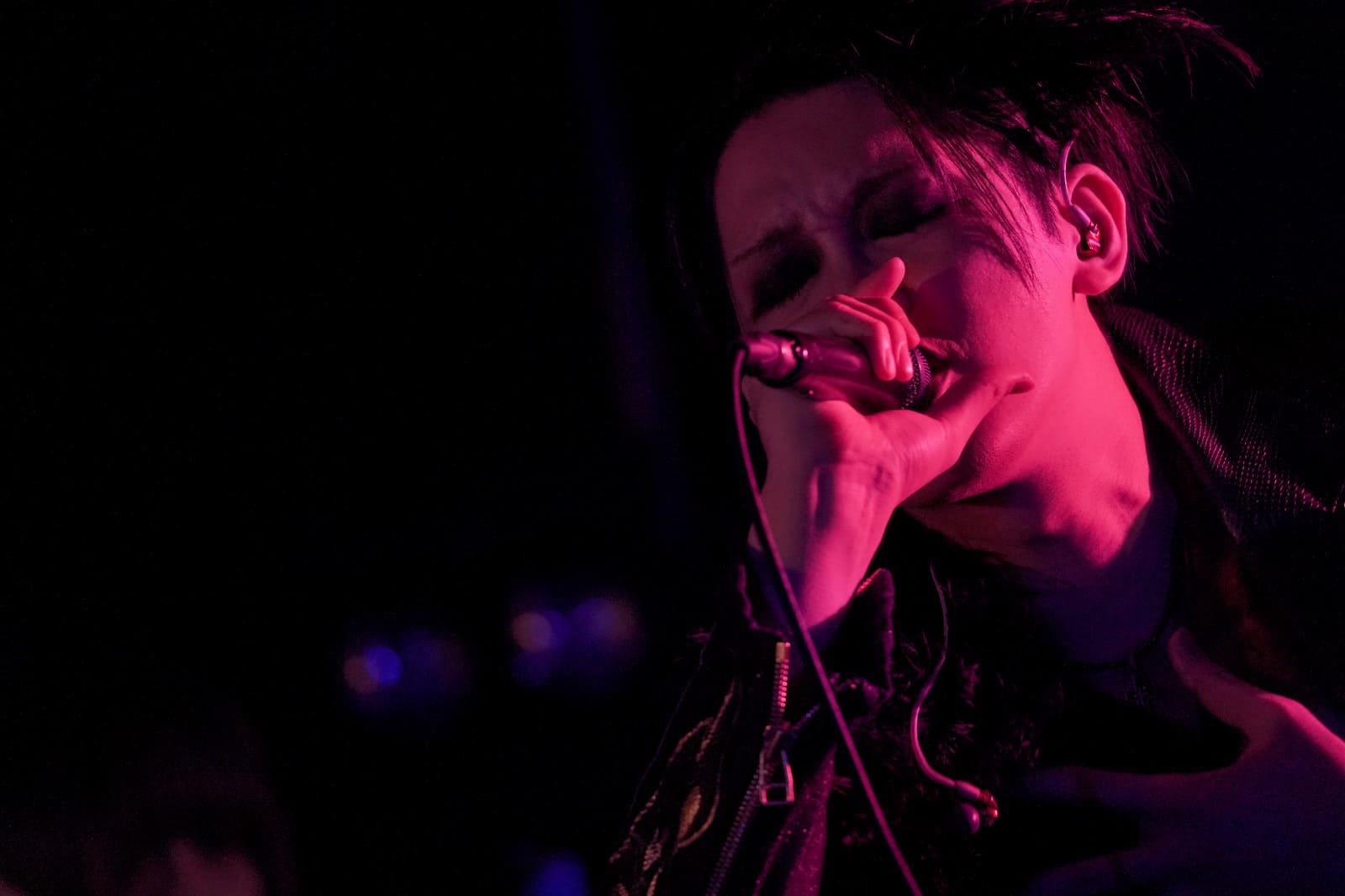 The mood in the room had become quite sentimental as they resumed the concert with “Fukanzen rimittā”, the perfect song to follow up such a heartfelt speech. The lyrics were full of hope and, coupled with Ranju‘s summery guitar rhythms, the song made us feel revitalized. 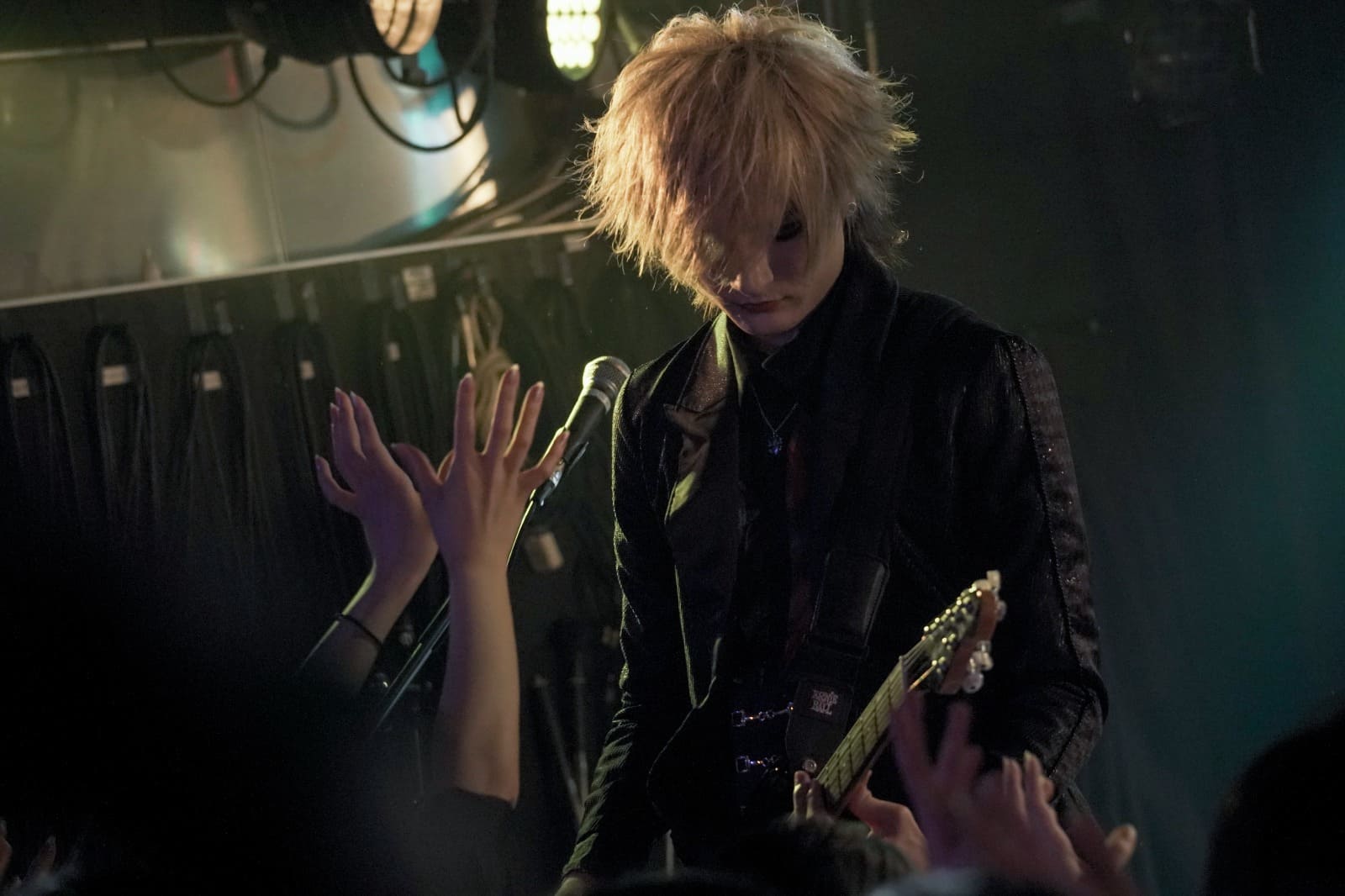 You could feel the connection between everyone present that day at Shinsaibashi VARON, as the room was basking in a summer-like afterglow.

Just as if he had read our minds, RiNa took out a fan. The first chords of a koto (traditional Japanese instrument) could be heard, announcing their song  “Hibana”.
Fans also brought out the band’s official fan and waved it along to the rhythm, transporting us to a summer matsuri.
The highlight of the song was ShuKa’s brilliant guitar solo, which RiNa introduced proudly. 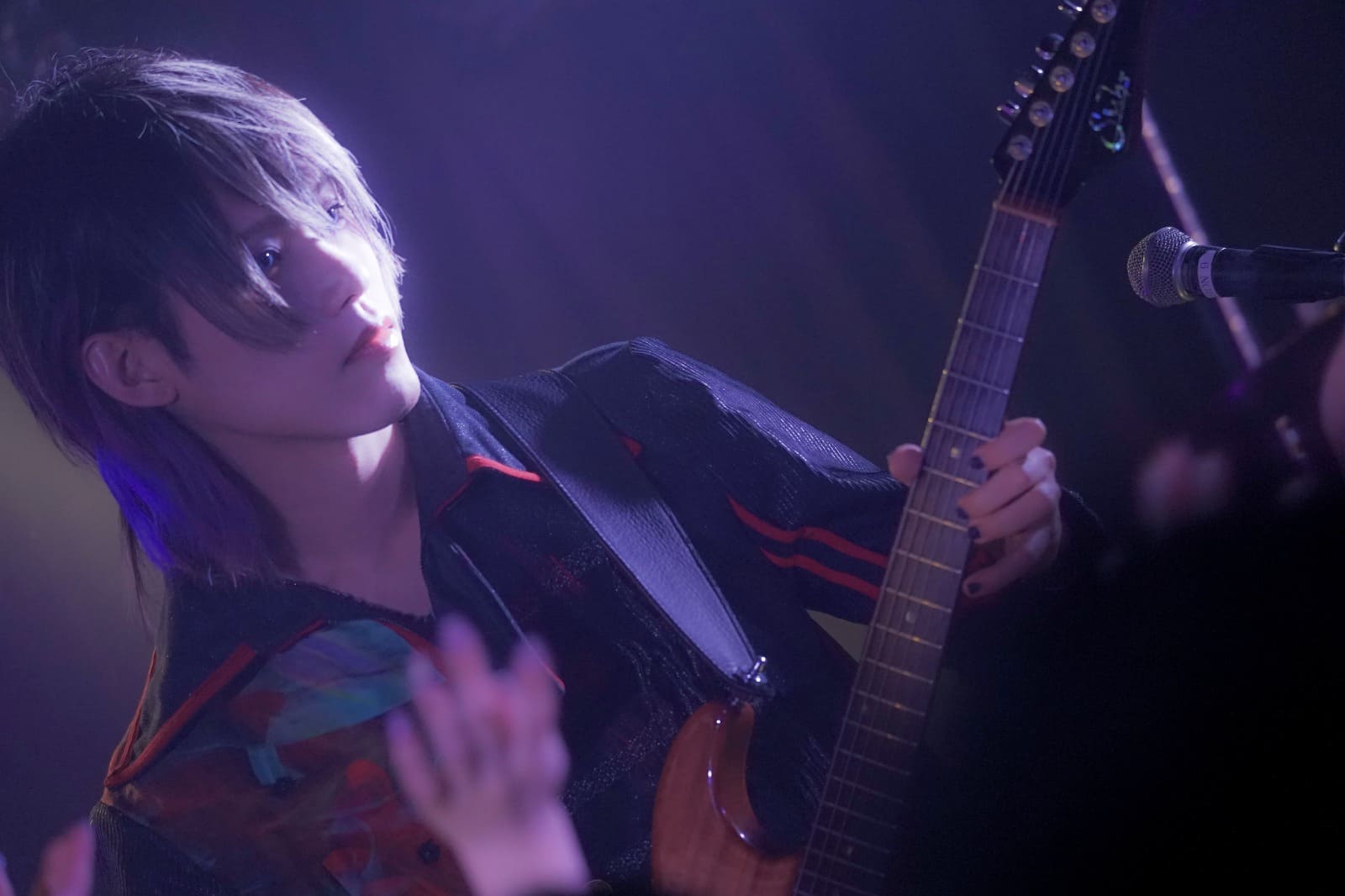 At that point, it felt like we had certainly already reached the climax of this concert so no one expected the next song to be “Hangyaku kōshinkyoku”. The audience went crazy and started bowing frantically while following the rhythm.

The members of Yamitera started moving around the stage, exchanging places with each other, but Minato was the one who stood out the most. While playing right in the center, everyone’s eyes were on him. He commanded the attention of the crowd with his charisma, dancing energetically while playing.

The song they chose to close the concert was “Zensen keirei uta”. RiNa asked us to keep on headbanging until the very end, and so did the fans while he moved from one end of the stage to the other.
J ‘ω’ ² was in charge of ending Yamitera‘s set, all the members turning their backs to the audience to enjoy the last few notes before leaving the stage to make way for NICOLAS.

Next week, we will have the chance to sit down for an interview with the members of Yamitera.
Do you have any questions for them? Leave them in the comment section below!