It was HONMONO’s very first oneman show. For the occasion, they had selected one of the most well-known venues in the Osaka visual-kei scene: Shinsaibashi Diner SHOVEL.The band was formerly known as “COPIBAN” (copy band), but resurfaced at the end of 2021 under a new name, HONMONO, and flaunting a brand new style, both in musical composition and aesthetics. Their concept: authenticity and imitation, as suggested by their name, which roughly translates to “the real thing” in English.

The show started without much of warning, a gloomy melody echoing from deep within the hall.  Much to everyone’s surprise, the stage curtains opened to… yet another set of white curtains. A voice started narrating, introducing the band’s concept, all the while we could see MaKa’s shadow projected onto the curtains as he pretended to be a puppet under someone’s control. He also made shadow puppets, taking full advantage of the stage props.

Once the introduction was over, the second curtain fell to the ground and the hall was dyed in red. You could feel the aggressiveness and tension in the air as they launched into “Nisemono“. Fans immediately began to headbang frantically.
Despite it being their first oneman, all the fans already seemed to know the furitsuke perfectly. Through his rather sinister mannerism, MaKa acted as if he was an obake (a Japanese ghost) while repeatedly asking the crowd, “Where is your honmono?” Crimson lights still lingering, the hall was taken over by MaKa‘s guttural voice during “Doke no sugata“. PP came to stand at the edge of the stage, closing the distance between himself and the audience.

“Vanity ~Nakunatta anata no tame no chūi jikō” started on the beat of Sekai’s ear-shattering drums. The lighting pointed up towards the ceiling, as if to distract us. At that moment, all the members of Honmono started bowing quickly back and forth. To the reporter’s surprise, the entire audience took it as a cue to crouch down, hands enjoined as if in a prayer, but then bounced up in unison, clapping their hands as they did so. This particular song had interesting touches of kote-kote kei from the early 2000s, but with modern-day breakdowns. At the end, everyone crouched down again.

As a transition, they brought back the narration, this time over a music box melody.
Next was “Ribāshi“, which has a calmer and catchier rhythm. From the back, we were grateful to be given a chance to catch our breath a bit after so much bustling. Halfway through the song, Kiyo’s outstanding bass skills had us captivated.

“Jigyaku no hanabira” began with a traditional melodic introduction. However, a complete and utter silence suddenly befell the concert hall, broken only as MaKA suddenly kicked off the song with gutturals. The whole band soon joined in as fans wielded out handfans and to waved them in the air.

Next, the band did a short improv segment  as the audience clapped their hands along to the beat. At first there was only Kiyo on bass, then Sekai joined in on drums, followed by REY and PP, the two guitarists.

The jam session ended on a rather comical note, as they played a game of janken (rock-scissors-paper) in order to choose the next member to improvise… And it always turned out to be poor Sekai. MaKa returned on stage and, with his powerful voice, started to hype up the audience. The room danced from left to right, with their arms up in the air, along to the tune of “Kuro no sekai~ Rizumu asobi-on asobi~“.

But as the song drew to an end, we were given another short respite as the rhythm slowed down and the sound of clock hands could be heard… It was (literally) time for “Neon“. The song felt like a melancholic reminder of the passing of time. Everyone in the audience seemed entranced.

Next was “lil’ smoky“. With a blue light shooting across the venue all the way to the back of the room, MaKa seemed to be looking for something that he couldn’t find or, perhaps, that didn’t even exist…. There, he once again caught us off guard with his high-pitched vocals, a register he hadn’t shown us until now.

With “Suton”, the lighting took up more aggressive colors, red and purple, which befitted the rhythm of the song, the hardest one so far. 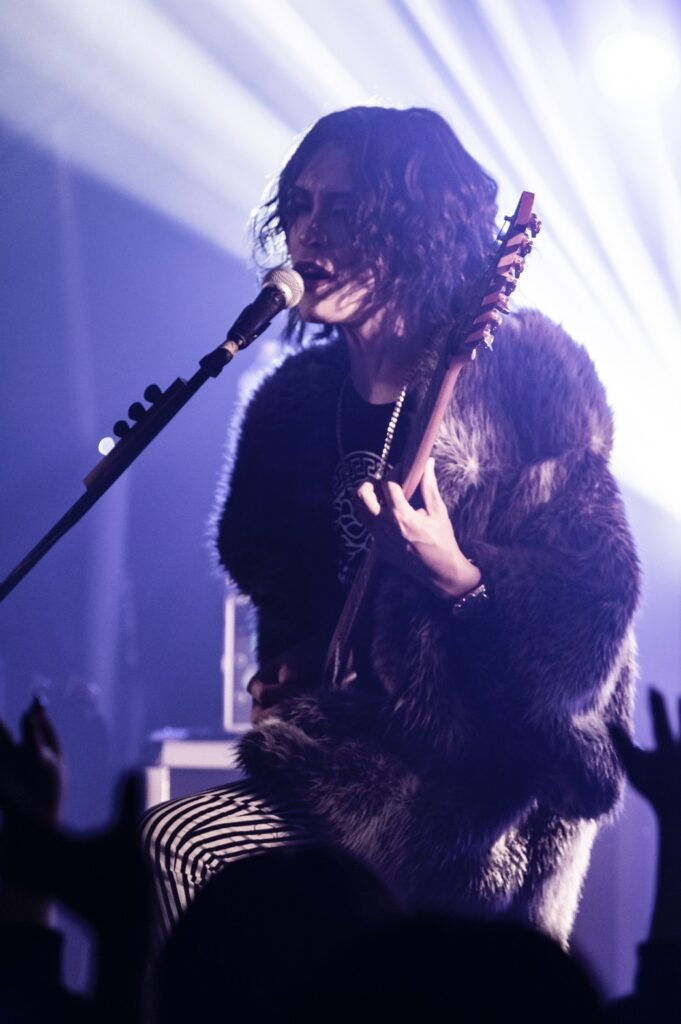 PP sang the chorus while MaKa, portraying a slow descent into madness, broke out in gut-wrenching screams.
Between songs, MaKa asked us again over and over, the tone in his voice increasingly persistent: ‘‘Have you found your honmono yet?’’

As the last notes resounded in the hall, the members said goodbye and left the stage, but not for long as the crowd soon reeled them back in for an encore.
REY seized the opportunity to swiftly replace a broken string on his guitar that had probably snapped during the first half of the show
When they asked fans if they were tired yet, if they could still handle more, the response was an unanimous and resounding yes!
Yet, Sekai and PP continued to chat, prompting MaKA to sit in the center of the stage, looking impatient, fans laughing at the comical scene.

Before long, “kon’ya ni susanda genjitsu” began and we got to enjoy the full power of HONMONO‘s characteristic gutturals, which instilled us with renewed energy. Fans danced back and forth in the hall, held their arms open for MaKa as he performed a solo a cappella.
PP moved around the stage, still full of energy. REY remained close to the front row, grinning the whole time. The two guitarists swapped positions and played back to back with Kiyo, making this one of the concert’s highlights.

The oneman closed with their signature song, “Nisemono“, the same song they had opened the concert with. At the very end, PP threw picks for fans to catch while Sekai and REY gave fans a brief reminder of their next tour dates in Tokyo and Niigata. Sekai was the last to leave the stage.

While fans already lined up at the merchandise table, the word HONMONO was projected on the backdrop of the livehouse. One question remained: Had everyone found their honmono? From NIPPONGAKU, we hope to know more about HONMONO very soon!