So we change scenery! We had liked the vibe of fiveStars’ 15th anniversary in Nagoya so much that we decided to head to Tokyo for the finale.
In the capital the place chosen to celebrate the “fiveStars 10th ANNIVERSARY LIVE. 『A LIVE』” was Spotify O-EAST venue (former Shibuya O-EAST, well known among visual kei fans in Kanto).

fiveStars is the store if you are looking to buy items and CDs from your favorite visual kei artists. They also usually hold “instore” events as purchase bonuses, which allows fans to meet their favorite artists, get their CDs signed or even take a picture with them!

Since May people always say here :“it was a hot day”, but this time it was the hottest one… with about 40 degrees of humid heat! But that did not discourage the fans who were already crowding hours before the start of the show to buy merchandising with the exclusive gifts of this edition. (Note: In Japan they usually sell the goods before the concert) 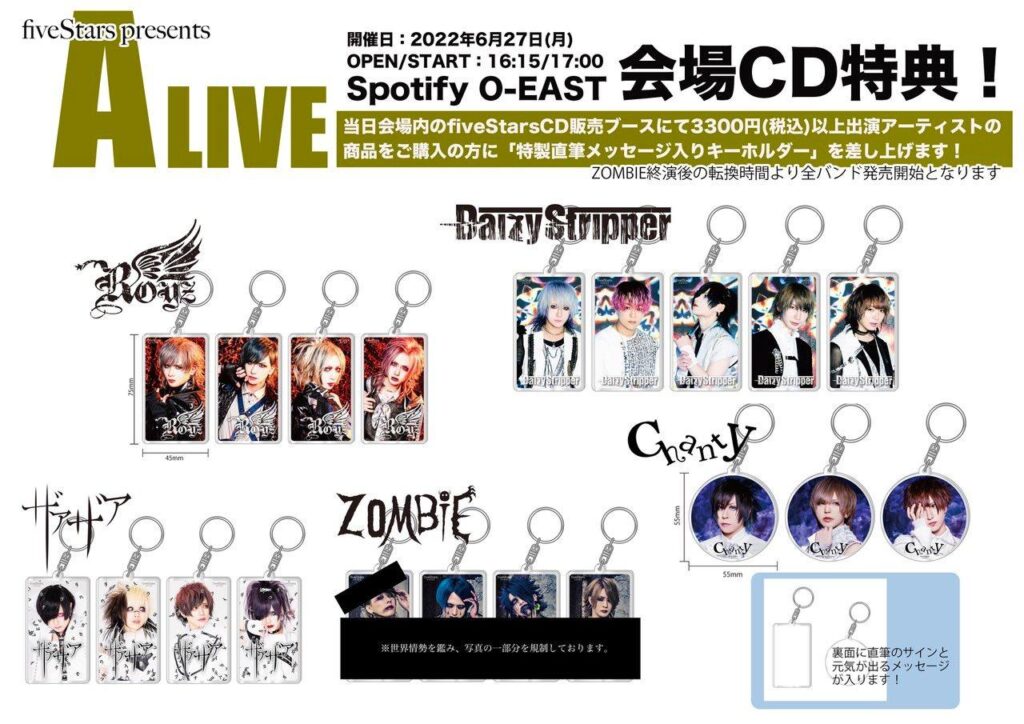 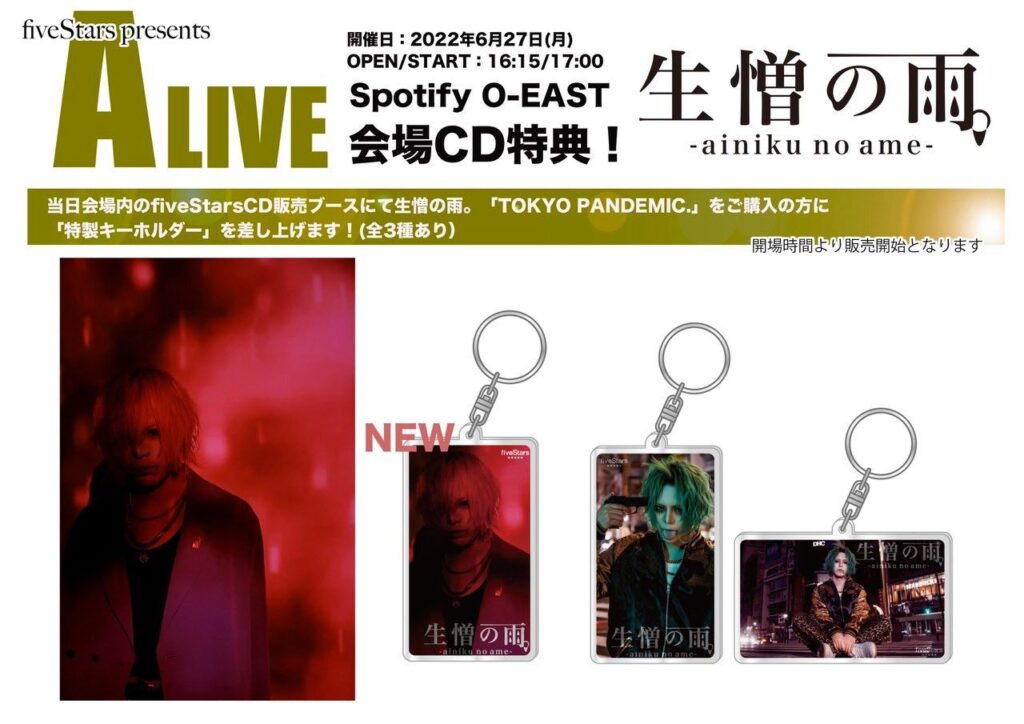 Those in charge of opening the event were DaizyStripper, an alternative rock band with a long history. Since mid-2007 they have carved out a niche for themselves in the Japanese visual kei scene maintaining their original line-up up to today.
It didn’t take long to gain international fame because just a year later they made their debut abroad for American fans at the Otakon in Baltimore (USA) and a couple of years later at the Japan Expo in Paris in 2012. 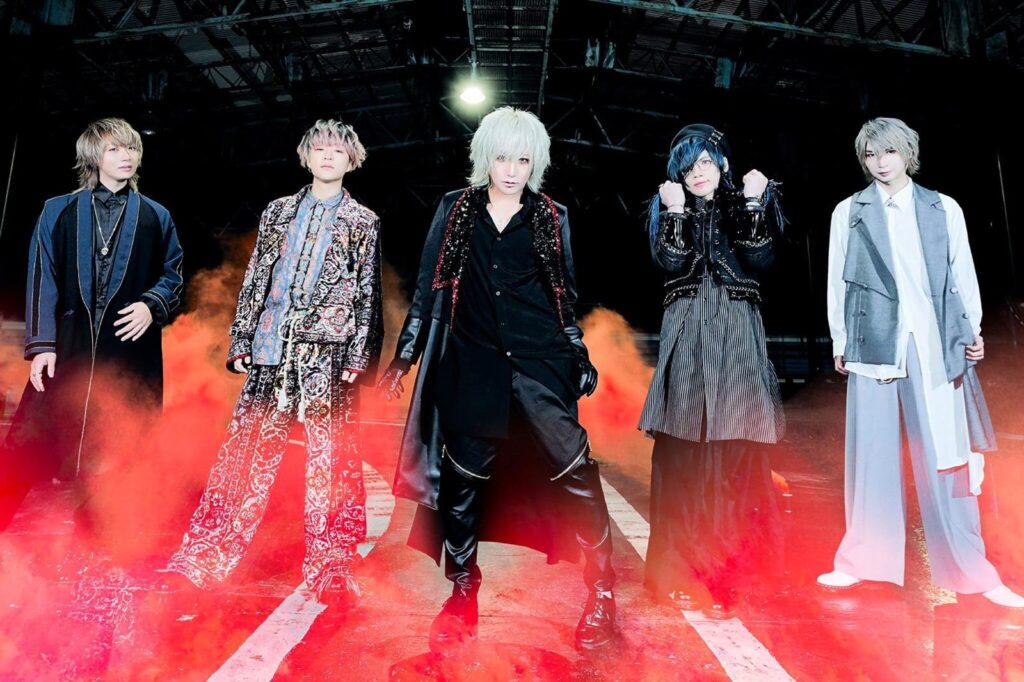 Their particular style has been changing over the years, both aesthetically and musically, from pop touches to other more rockerish and aggressive ones but always keeping their positive essence.
As per their positive personality even the band’s name itself has an optimistic meaning: “Daizy” refers to the innocence of little girls and “Stripper” refers to being an adult, with all that that implies.
With this combination of words the band wants adults to reflect on the idea that there is nothing wrong with keeping an immature side and pursuing our most impossible dreams. 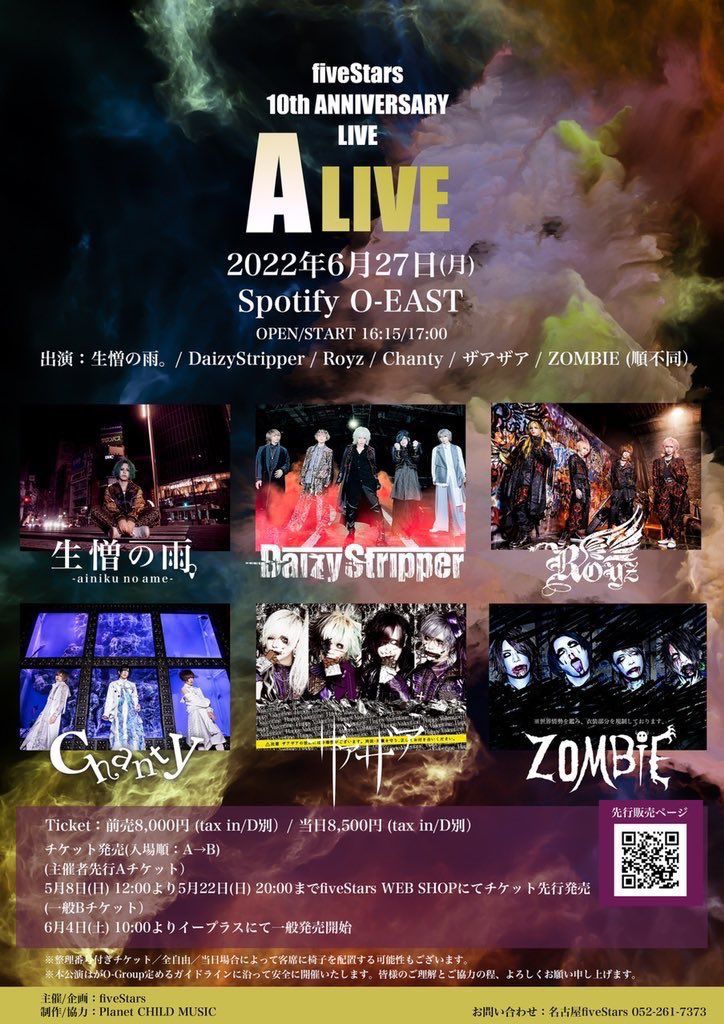 At 4:15 p.m. the doors of Spotify O-EAST were already open and fans began to enter with different shirts: some recognizable as the “Kazuki’s Otaku” from XaaXaa, others from DaizyStripper and the rest of the groups… Although the group which stood out the most were the fans of Ainiku no Ame as many of them wore the “pingoki” (Japanese pink school uniform) in addition to the t-shirts with the band’s logo.
While they were entering we could already hear some songs of the bands that were going to play today which encouraged the fans and served as a warm-up so as not to make a mistake with the furis (coordinated dances of the fans) later during the concert.

At 5:00 p.m. the volume of the piped music drastically increased and after a moment of silence it changed to an electronic melody with tribal touches. The curtain opened and the lighting flickered like the flash of a camera taking pictures of us. The only thing we could see was the fiveStars banner in the center of the stage and Kazami’s drum kit below.
Suddenly, a shy voice in the music whispered the mythical “DaizyStripper” and the band entered the stage with incessant applause from the public.

The first thing DaizyStripper did when they took their position was to greet the public. The concert had not started yet and everyone already had a smile on their faces. 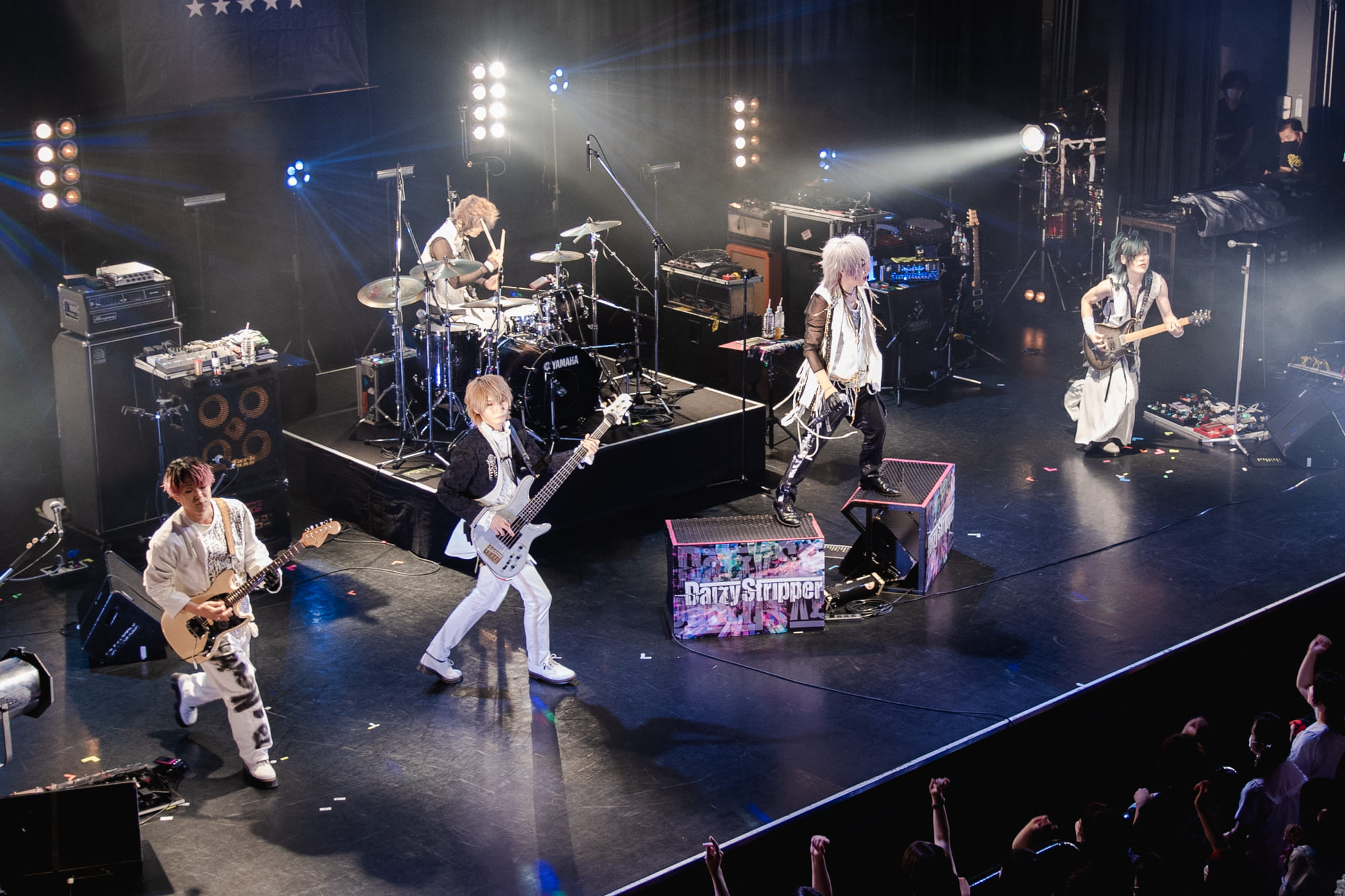 fiveStars’ 10th anniversary in Shibuya kicked off with the band’s classic “Shikisai vivid”. Yugiri’s voice filled Spotify O-EAST with joy. From the beginning you could see the synergy between the band members, especially between Nao (gt) and Yugiri.
The vocalist sat in the center of the stage and Nao quickly went to sit with him, a very friendly moment that grabbed the whole attention of the audience.


Sticking with the classics, “decade” was a shot in the arm for everyone present. Kazami’s drums resonated loudly above the rest of the instruments.
It was a shame that the public could not participate in the choirs due to COVID measures. Although we barely noticed that absence thanks to Mayu and Nao helping Yugiri with the choruses. They got so excited that they ended up doing the mythical rockstar pose of playing back to back at the climax of the guitar solo 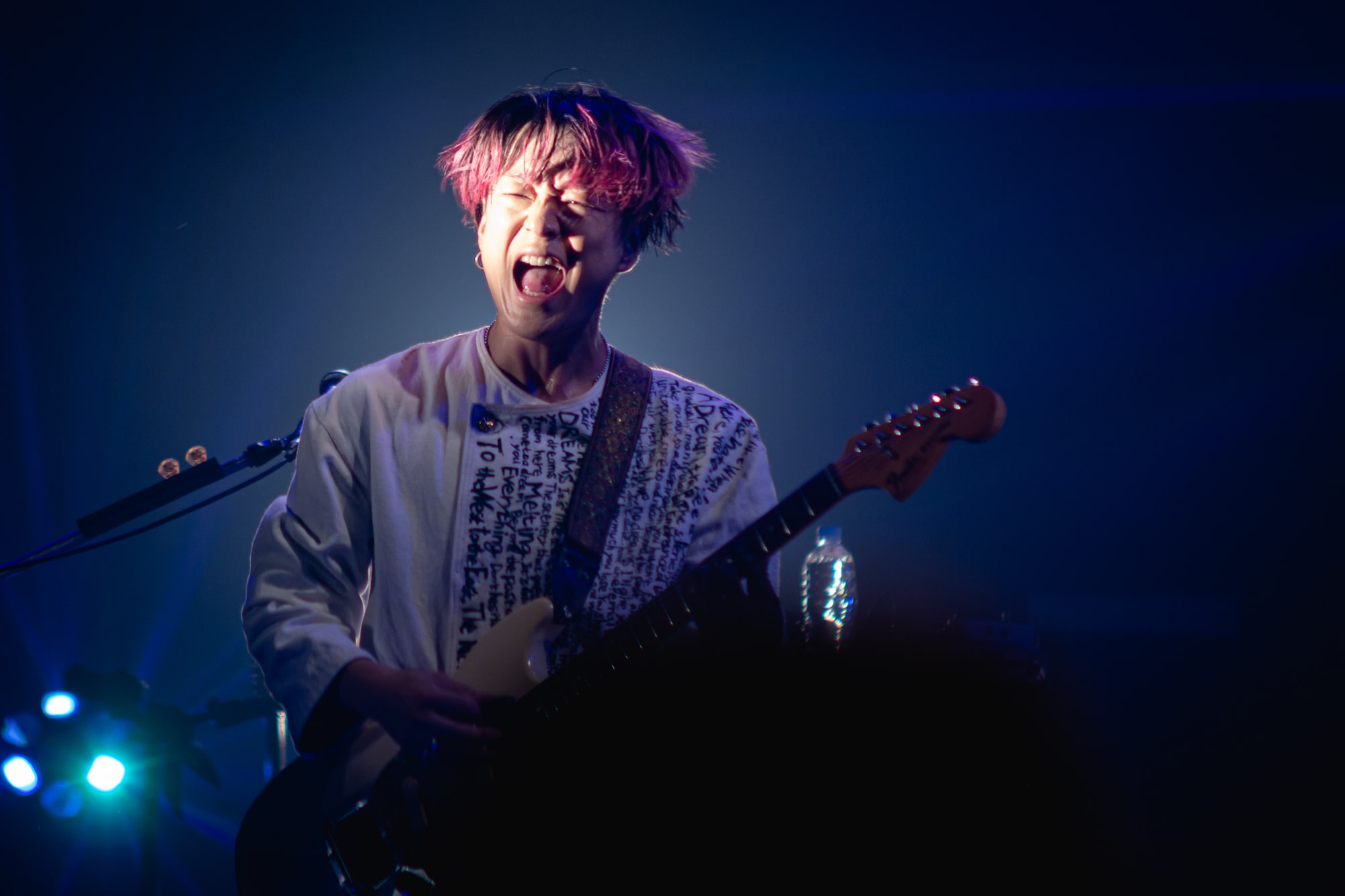 Clearly Daizy Stripper is the band you need to listen to before facing a difficult day. They gave off pure positivity and a desire to live in the moment.

To rest a bit after this adrenaline rush, Yugiri briefly told us about the tour dates they have this year. He also agreed with NIPPONGAKU that it is a pity that the public cannot participate in the songs. He joked that we should all start screaming and the audience burst out laughing.

After this small rest, to the surprise of the audience, they presented their new song “HATSUYUME” which had not been released yet.

The stage was darkened for this ballad, we could only see Yugiri in dim lighting in purple tones. During the chorus, the passion in Yugiri’s voice managed to touch the hearts of everyone present. The audience remained motionless the entire time.
As the song progressed, the stage lit up more, as if little by little they were showing us the most intimate facet of DaizyStripper… 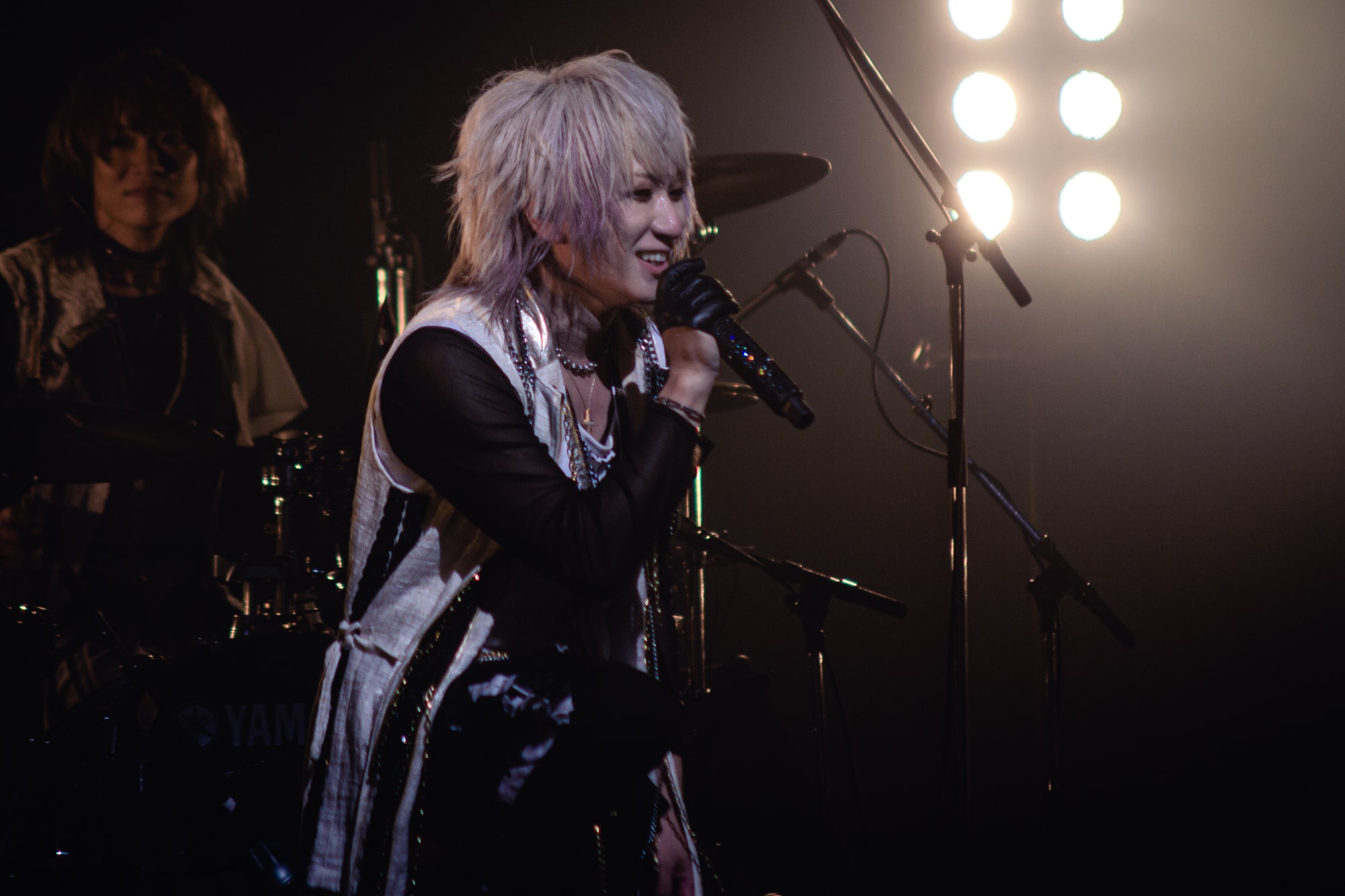 At the end, Yugiri said “Thanks” and the audience applauded for a long time.


The song they played next was dedicated to Hotta-san, the organizer of the event. At the beginning of “HELLO, again” Rei’s bass notes fused perfectly with Yugiri’s voice, this together with the combination of guitars cooled quite a bit the atmosphere on such a hot day. 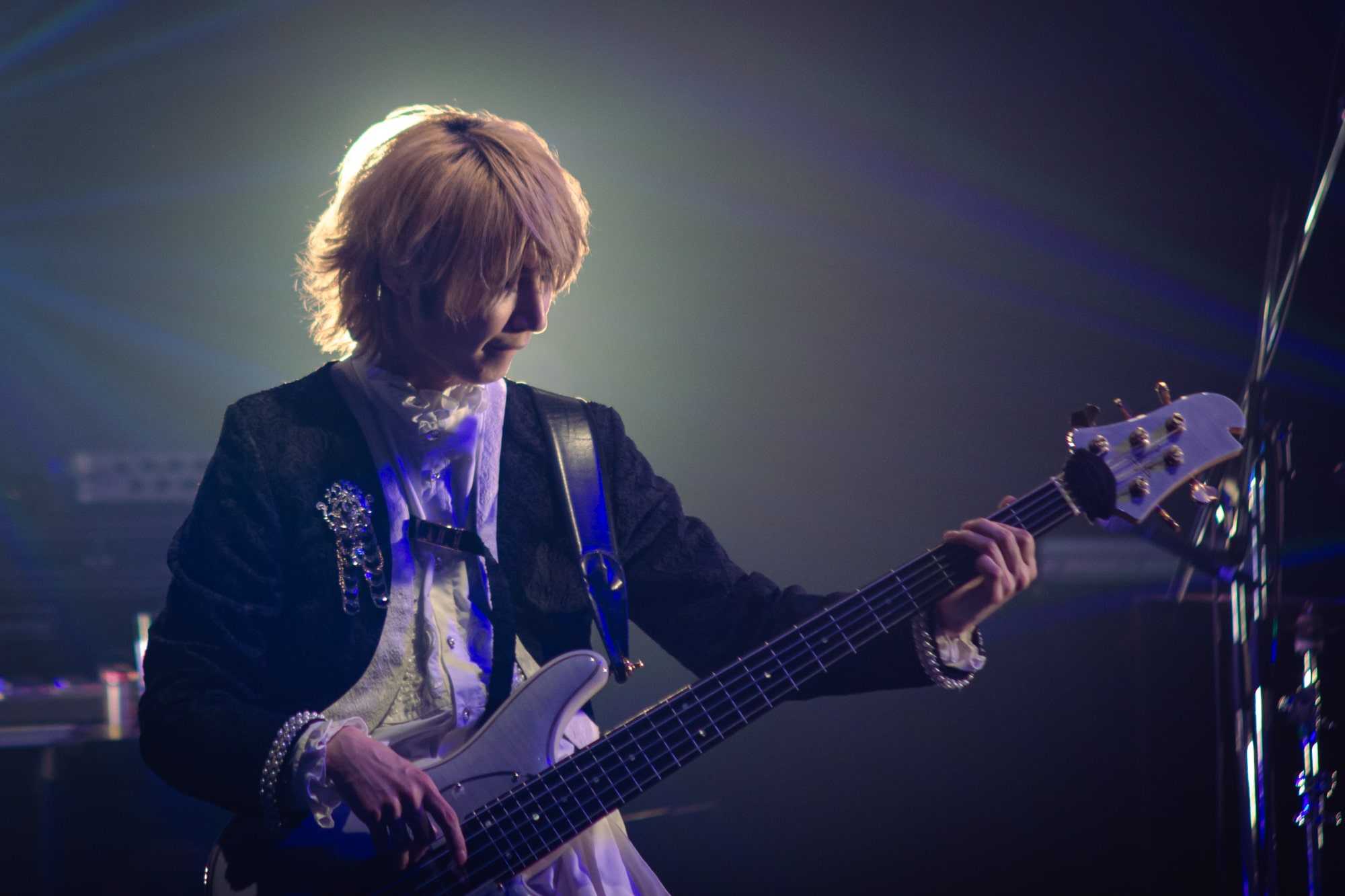 Without a doubt “AGAIN” was the climax of the show. Yugiri pointed violently at everyone his mic stand, like a sword.
Rei and Mayu walked to the edge of the stage to further motivate the fans.
However, Nao was the clear star here, moving around with a lot of energy, even ending up on his knees during the guitar solo and ripping open his shirt!.

Everyone in DaizyStripper was in full ecstasy.

“Ao” was the last song that day. Thanks to the rush of energy in 「AGAIN」, the connection that had been created between DaizyStripper and the fans was intense.
Yugiri also ended up on his knees in this song, singing to the crowd.
Just before finishing, Yugiri and Mayu did a fist bump, a sign of “well done” to everyone. 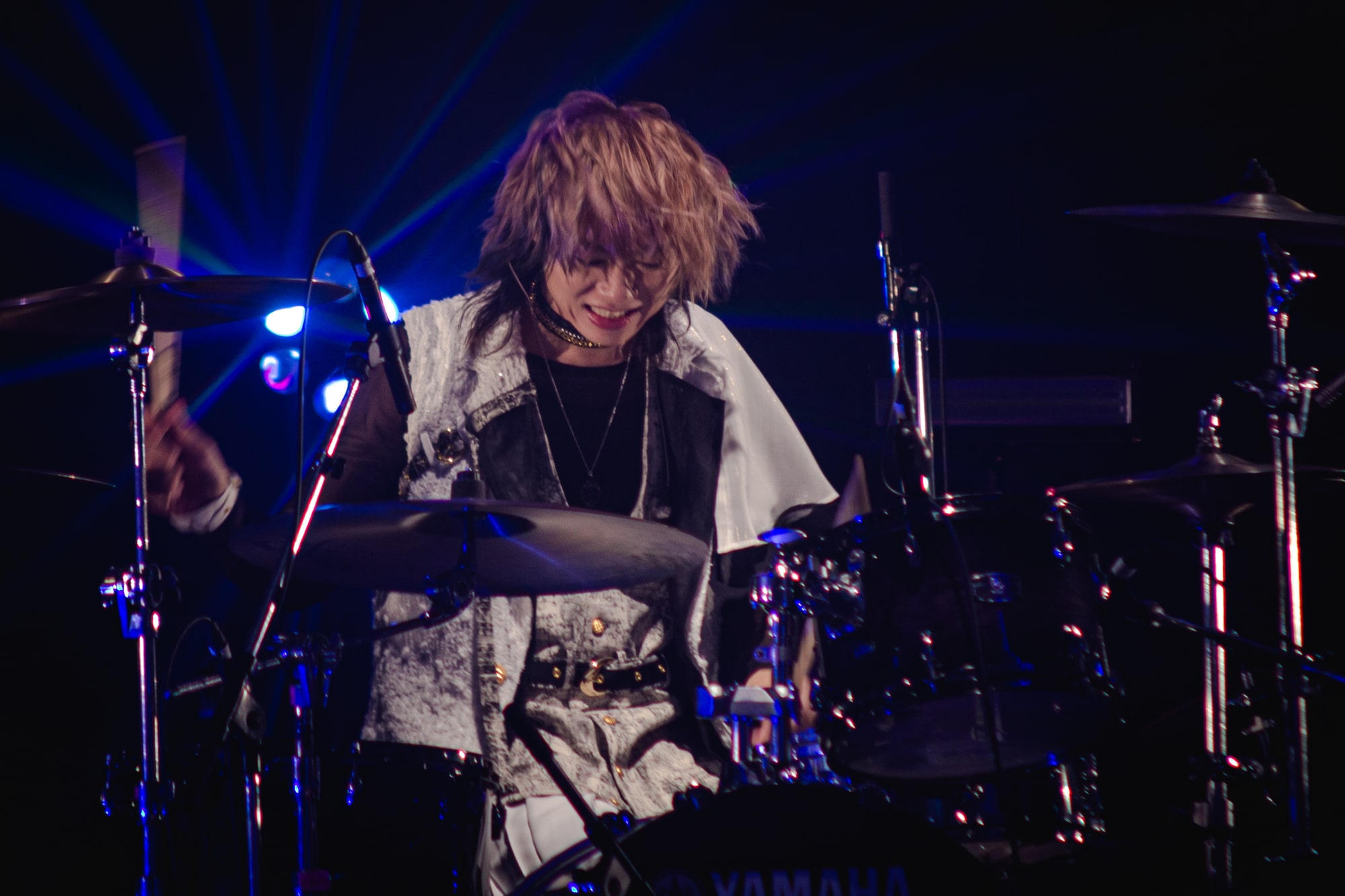 But Kazami still had energy, so he did a final boost on the drums to release tension before getting up.

Just like at the beginning of the show, DaizyStripper walked off the stage with a smile as the fans were clapping and recovering for the rest of the event. 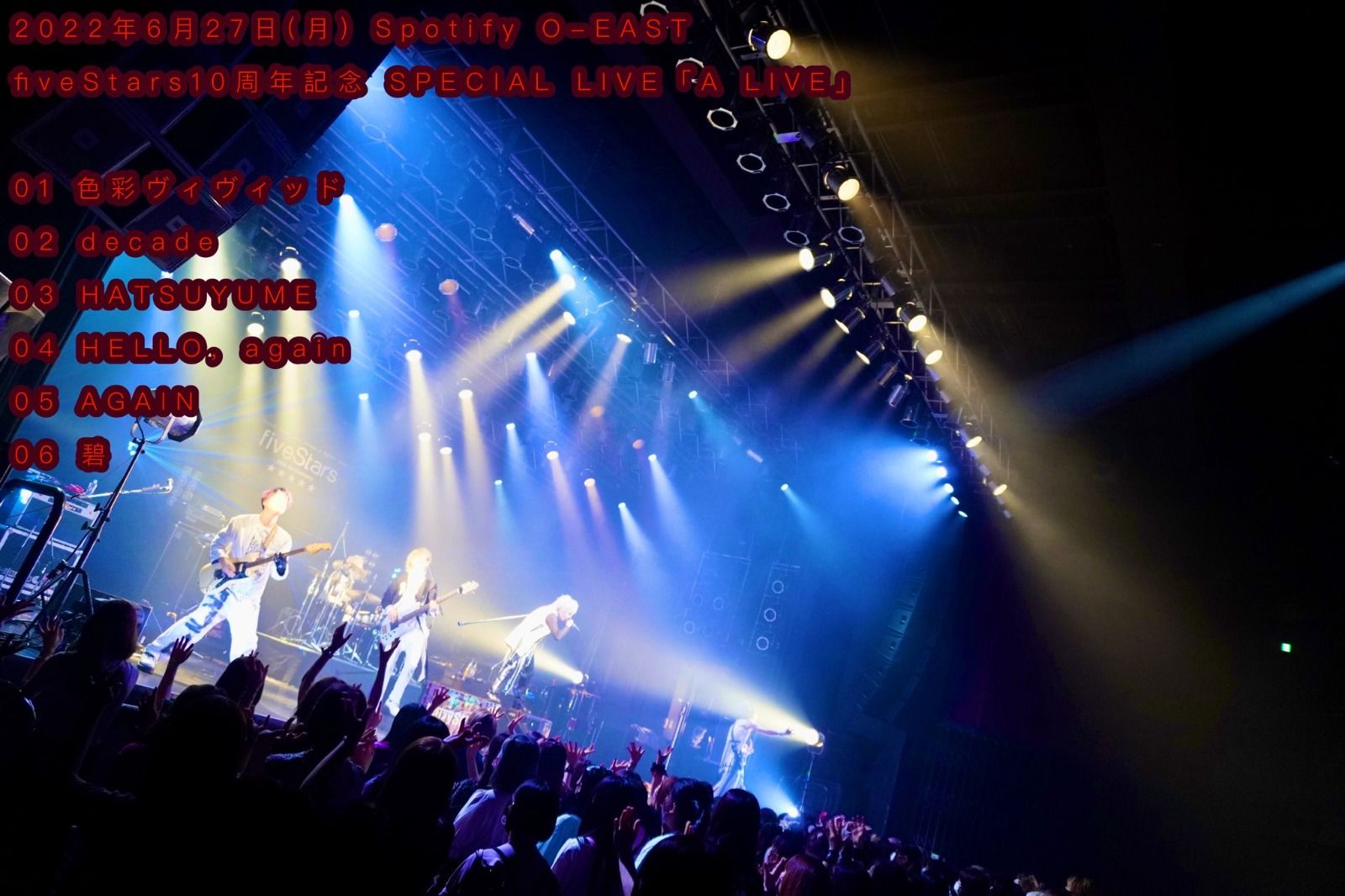 Have you been wanting for more DaizyStripper? On August 2nd they release their ninth album with a tour throughout Japan… Don’t hesitate to attend any of the concerts! 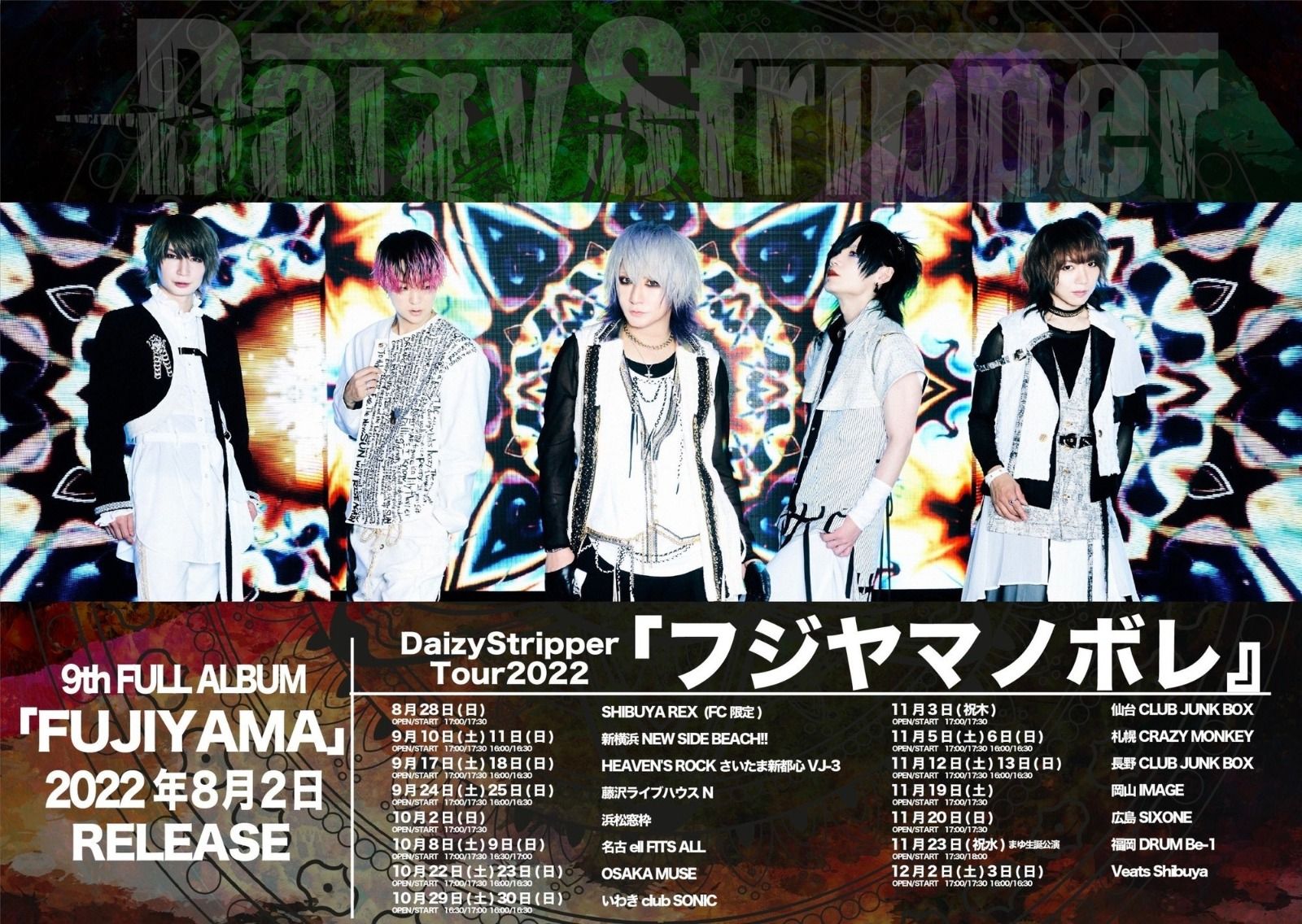 Next week, we will have the chance to sit down for an interview with the members of DaizyStripper.
Do you have any questions for them? Leave them in the comment section below!