Nice to meet you! Thanks for allowing us to hold this interview today. Could you please introduce yourselves to those who don’t know you yet?
● Yoshiatsu: I am Yoshiatsu. I sing.
● Daisuke: I’m Daisuke, the pianist and composer.
● Yutara: Yutara here, I play the bass and I’m in charge of the design work as well.
● Lotto: I’m Lotto. I love alcohol.

The bar Yoshiatsu owns is also called “Owl”. Why did you choose that name? What is it about owls that attracts you so much?
● Yoshiatsu: This band and my bar are both kind of night activities. Owls are creatures that can only be seen at night, just like us.

It must be hard having a band and owning a business at the same time. I wonder if some of the ideas you had forthe band didn’t come from nights spent drinking there together…(laugh)
● Yoshiatsu: The members came to my bar once before, but since I also have fans coming over to drink, it’s not something we can do frequently.
● Yutara: I’ve only been there once. The atmosphere was quite nice!
● Lotto: I think it’s very important for the members to gather and drink together from time to time.

Where does the band “Fukuro” come from? Who came up with the idea of making this band?
● Yoshiatsu: At first, it was me who wanted to start it, but the concept and music style I initially had thought of evolved and changed considerably the more we met, played together and discussed it. I think we came up with the music style and visual concept we have now as a result of all of our different personalities.
● Daisuke: We kind of ended up like this as we were making songs and trying out various things during rehearsals.
● Yutara: I was initially contacted by Yoshiatsu, but as the different members joined and pitched their own ideas, we ended up the way we are now. It was Lotto who invited Daisuke to join us to complete the group.
● Lotto: Before we could find Daisuke and have him join us, we were struggling to find a guitarist so I just thought about having someone play the piano. By adding that element, we could experiment and try a lot of new things we had never even thought about!

Does any of you have experience playing funky or jazz music before this project or was this the first time?
● Yoshiatsu: I personally had never played it before.
● Daisuke: In my case, I used to play a lot of jazz and R&B. Unlike the other members, what I lack experience in is rock music.
● Yutara: I’ve played some rock and pop music before. I’ve also experimented with other music genres, but it was the first time for me to play the bass alongside amazing piano melodies like we do in Fukuro.
● Lotto: I like jazz! Playing rock drums is completely different, so there was a time in the past I tried to study jazz drums to level up my drummer skills.

Could you give us some hints as to what we can expect from Fukuro from now on? Maybe you would like to try flamenco sometime? (laughs)
● Yoshiatsu: I would like to tell you, but we don’t even know ourselves. We just wanna make the best songs we can at all time.
● Daisuke: At first I just wanted to make songs we thought were cool and sounded good, but now, I also wanna try to make more songs which can be enjoyed to the fullest when we play live.
● Yutara: There’s a lot even we don’t know about this project yet, including how it is gonna evolve. Latin rhythms are kind of interesting when it comes to bass lines, I may want to try it out! (laugh)
● Lotto: From the evolution we’re seeing within the band, it looks like we’re gonna try a lot more new things from now on. I personally want to challenge myself as well!

Daisuke, your skills with the piano are simply astounding! You really are a genius. Do you play (or have you ever played) any another instrument? Is there something else you’d like to try when it comes to your musical interests?
● Daisuke: Thank you! I used to play the guitar since I also like metal and wanted to be able to do that kind of music as well.

Yutara, you’re also doing other music activities on the side. Did you always have an interest in the visual kei scene?
● Yutara: To be honest, I’ve never really been into visual kei that much. What I usually listen to the most is the music from movies or games I like… I may be a little bit more into pop music.

Lotto, you’re also playing as the support drummer for deadman, which is a band with a darker image than Fukuro’s. How does it feel to be part of music projects with such different styles?
● Lotto: I have a lot of fun experimenting with various genres through the different projects I’m part of. I’ve realized I’ve grown more as an artist by doing so since I’m not just focused on one thing but rather, I get to try different styles that require distinct techniques. Being part of several projects at the same time keeps me very busy, but I’m so grateful to be able to do what I’m doing now.

A question for Yoshiatsu now. This is a question we got from your fans: why did you decide to become a singer?
● Yoshiatsu: I was not in charge of vocals at the very beginning of my career. There was a time when I was creating a new band and we weren’t able to find anyone who would fit as our vocalist, so I was told by the other members “then, why don’t you try it out?” and I became a singer just like that.

Your band’s style is pretty unique within the Japanese music scene. Were there any overseas bands that inspired you? If so, could you tell us who?
● Yoshiatsu: I myself have not been particularly influenced by any foreign artists.
● Daisuke: I’ve gotten a lot of inspiration from both Japanese and overseas artists. Indeed, I’ve taken a lot of inspiration from so many different piano players I couldn’t even name them!
● Yutara: My case is similar; I’ve borrowed bass lines from artists from outside and inside the country. More than the origin of the artist or even who the artist is, I take inspiration from what I like across all the music genres I’ve been playing and experimenting with until now.
● Lotto: I’ve been listening to the band “The 1975” a lot lately.

I know this is a difficult question, but what is the song you like the most out of all of Fukuro’s songs?
● Yoshiatsu: If I have to pick only one song from the CD we already released, I would definitely choose “Itsuka wa shinde shimau bokura wa”.
● Daisuke: Which one should I choose… I particularly like “Hikyōsha no romance”!
● Yutara: It is too difficult to choose just one… but a song I would describe as “one of our strongest” is “Vinyl Child”.
● Lotto: As for what I’d pick as the most intense song, I just think the most refreshing ones are those which require my full energy to play.

Which song would you say is the most difficult to play live? Perhaps because of its speed or the technical skills it requires… At Nippongaku, we were particularly surprised by the song ”Seppun”.
● Yoshiatsu: I don’t think it’s particularly difficult to sing, but I would say “Vinyl child”’ is a song whose timing can be quite tricky.
● Daisuke: This band has a lot of “delicate” ballads, so maybe I would say “Itsuka wa shinde shimau bokura wa”.
● Yutara: Fukuro doesn’t really have any fast songs, but there are some that make me kind of nervous because of the slides and silenced/muted parts in them. In that sense, I would say “NEO TOKYO” is the most difficult one for me since I have to do slap all the time.
● Lotto: “Sayonara dake ja” has a really low volume and slow tempo with some silences in between parts, so it’s the one I need to focus on the most when playing. 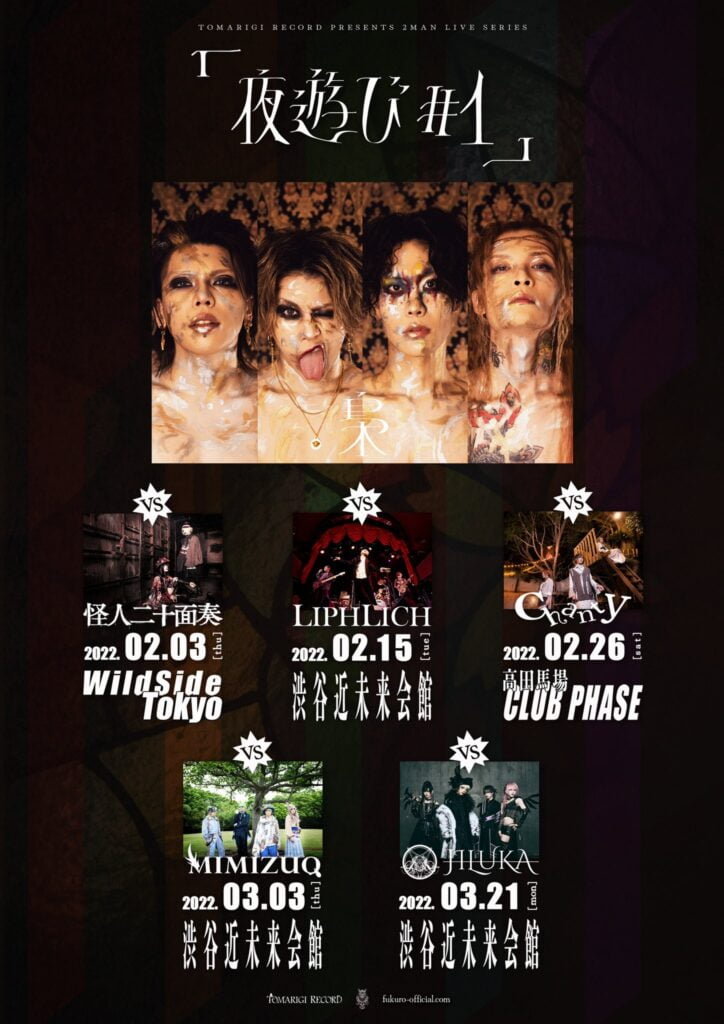 You’re starting a tour called “Yoasobi #1” in February where you will be playing with bands like JILUKA, LIPHLICH and such. Is there any other artist you would like to work with?
● Yoshiatsu: There are a lot!
● Daisuke: I don’t really know much about other bands, so I would like the fans to tell us who they want us to play with!
● Yutara: It’s really interesting and nice to be around artists with different music styles and to experience their perspectives
through it, so I’d like to work with a lot of bands!
● Lotto: Some day, I’d love to be able to play along Amamitsuki, the other band I’m in.

Yoshiatsu, you went to Japan Expo in Paris, France around two and a half year ago. A lot of fans from different European countries went there to see you! How was it? Did you had fun?
● Yoshiatsu: It became of the best memories of my life, and a day I will never forget. I would absolutely love to visit Europe again sometime!

Would you like to travel overseas once the current situation improves around the world (COVID-19)? To play overseas or even just for fun!
● Yoshiatsu: I think I will travel a lot once things are better! I’d also love to play overseas again.
● Daisuke: I really like going abroad, so of course I’d love to travel again. It’d be nice going for just tourism, but I’d also like to play a tour overseas!
● Yutara: I want to travel. I especially want to see the kind of landscapes I’ve only seen in games with my own eyes! I’ve only been to America before so I’d like to visit Europe (especially Italy).
● Lotto: I’d like to visit the city of music, Vienna.

Thank you for allowing us to have this interview with you today!
Is there something you’d like to tell our readers?
● Yoshiatsu: Thank you for reading this interview. I’ll come see you one day.
● Daisuke: Since even we ourselves have no idea how this band is gonna turn out, we’d like to hear what people think in order to keep growing. We want to improve a lot as a band!
● Yutara: Thank you for reading until the end. I hope you keep supporting us in the future as well!
● Lotto: I’d like our music to transcend borders and languages and to become the kind of music a lot of people can enjoy!

Don´t forget to check out our live report of Fukuro’s debut! 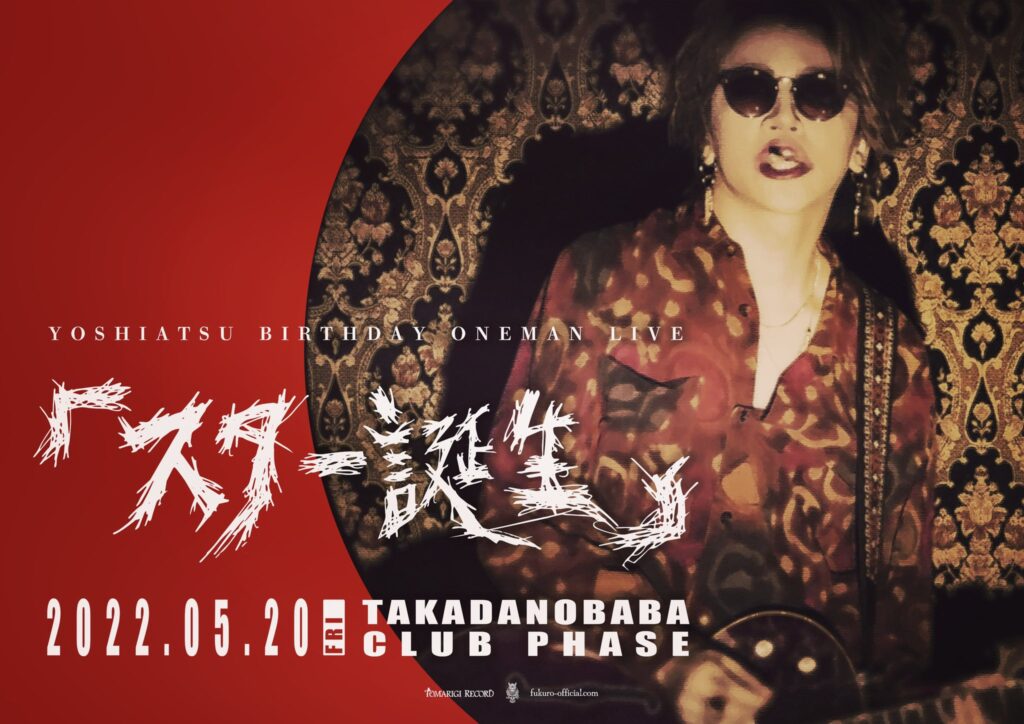