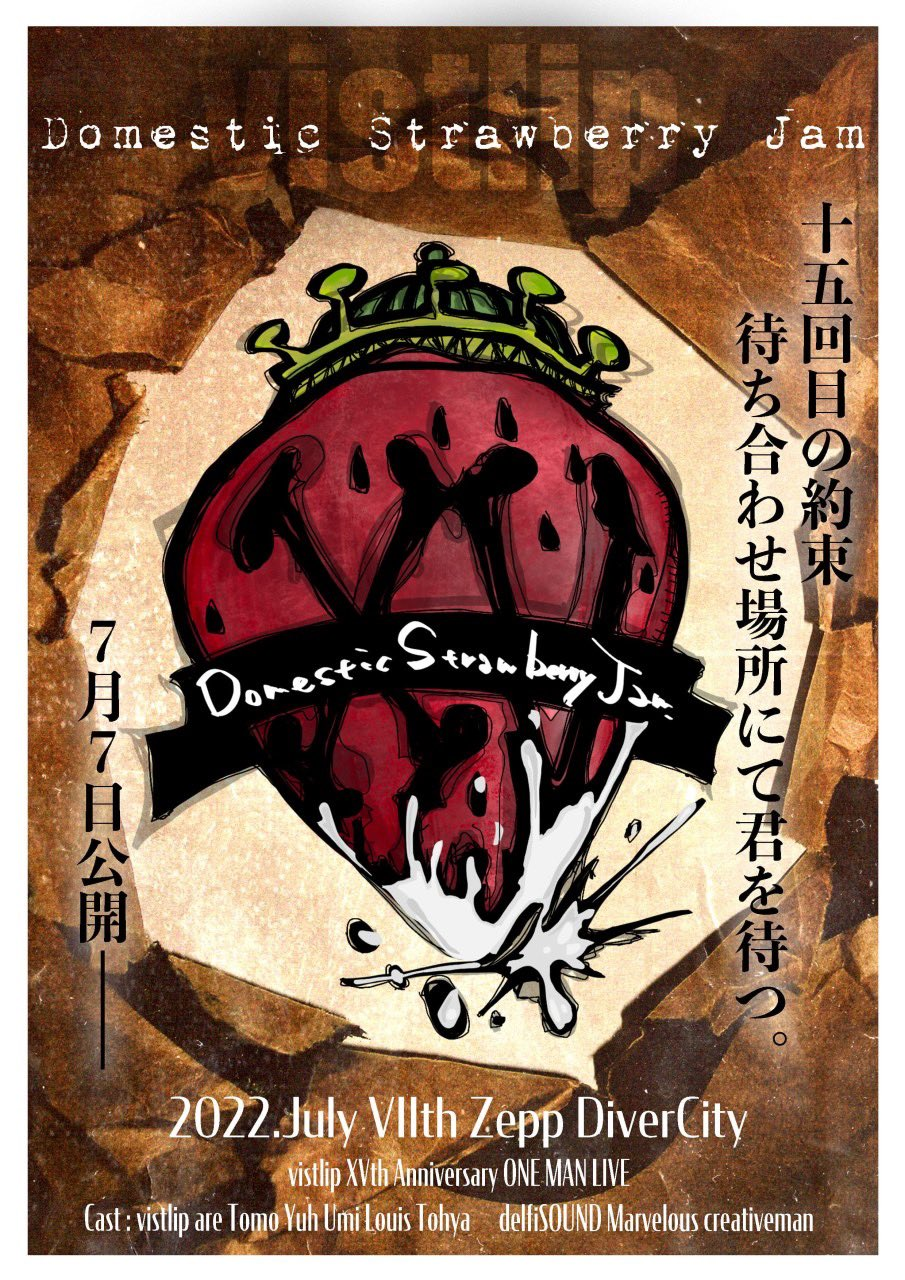 It is said that the legend of Tanabata talks about two lovers who can only meet one night a year when their stars cross paths… With the only condition that it does not rain on that day.

And this happens on the same date that, every year, the legendary Japanese visual kei band vistlip (formed by Tomo (Vo.), Yuh and Yumi (Gt), Rui (Bj.) and Tohya (Dr.)) attend to the appointment with their fans to celebrate their anniversary

The story was already writing itself because for that Thursday, July 7th 2022, a typhoon was expected in the Tokyo area, but miraculously it disappeared that same morning giving us an open sky to enjoy the day with no more worries than finding a shade under the trees in the area.

That night was the date for the 15th Anniversary event, yet another year the sold out sign was hung on the door of Zepp DiverCity, one of the most impressive concert halls in Tokyo.

A clear testimony of the success and popularity that they have achieved so far.

As soon as we arrived to Odaiba we could tell that something big was about to happen.

This place by itself already is specially magic, an artificial island on the outskirts of Tokyo where there’s a lot of peace in the atmosphere and it is also a small refuge to take a breath and enjoy a bit of silence in the bustling metropolis 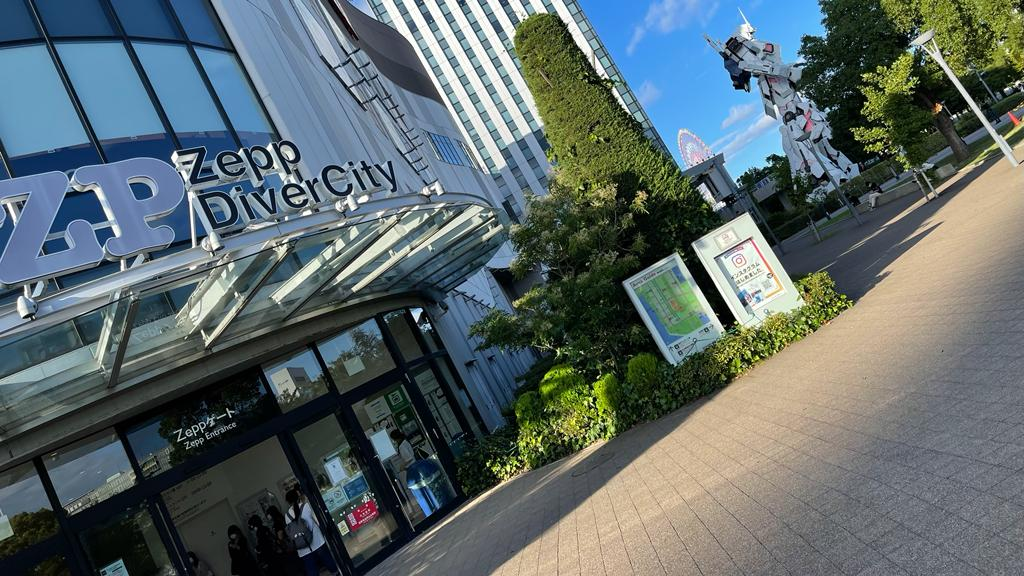 Among the number of museums, shops and entertainment venues that Odaiba offers a specific group of people stood out, the vistlip fans: they were already preparing for what was to come even hours before the doors even opened to access the site.

The tension was already tangible as soon as we were allowed into Zepp DiverCity.

But as soon as the curtain opened and the members of vistlip – dressed in white for the occasion – appeared on the stage, there was a tremendous rush of adrenaline, as intense as the Tanabata stars colliding in the night sky every year. 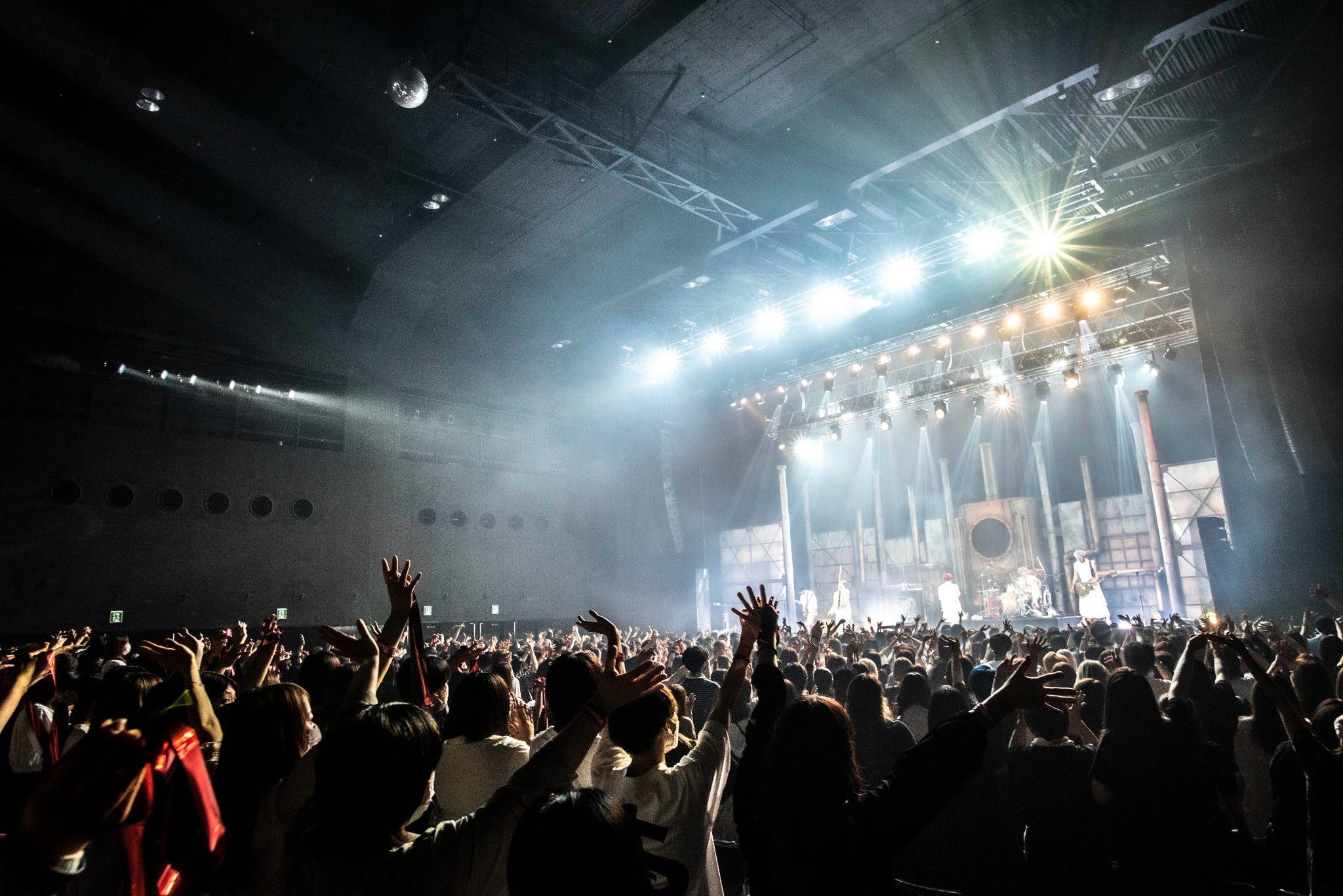 In the next two hours vistlip offered us a tour of all the memories we had formed together during these 15 years full of emotions.

In the center of the stage there was a sphere that was showing images and videos as the guiding thread of the entire show.

The opening was the band’s debut single, “Sara”, with which it all started for vistlip. That sensation of familiarity carried over into the melodies of “FIVE BARKIN ANIMALS,” “HEART ch.” and “STRAWBERRY BUTTERFLY”.

Although the newer songs like “BGM 「METAFICTION」” and “星一つ灯らないこんな夜に。” also fitted well among the others.

“BGM 「METAFICTION」” has a special feeling for NIPPONGAKU reporters and readers as it was our first contact with vistlip in Osaka. Being able to enjoy it again in Tokyo we could perceive new nuances as a few months had passed since its release.

Regardless of the time to which each song belonged, vistlip maintained the enthusiasm of all those present without breaking a sweat.

“Seniority is a degree” they say. 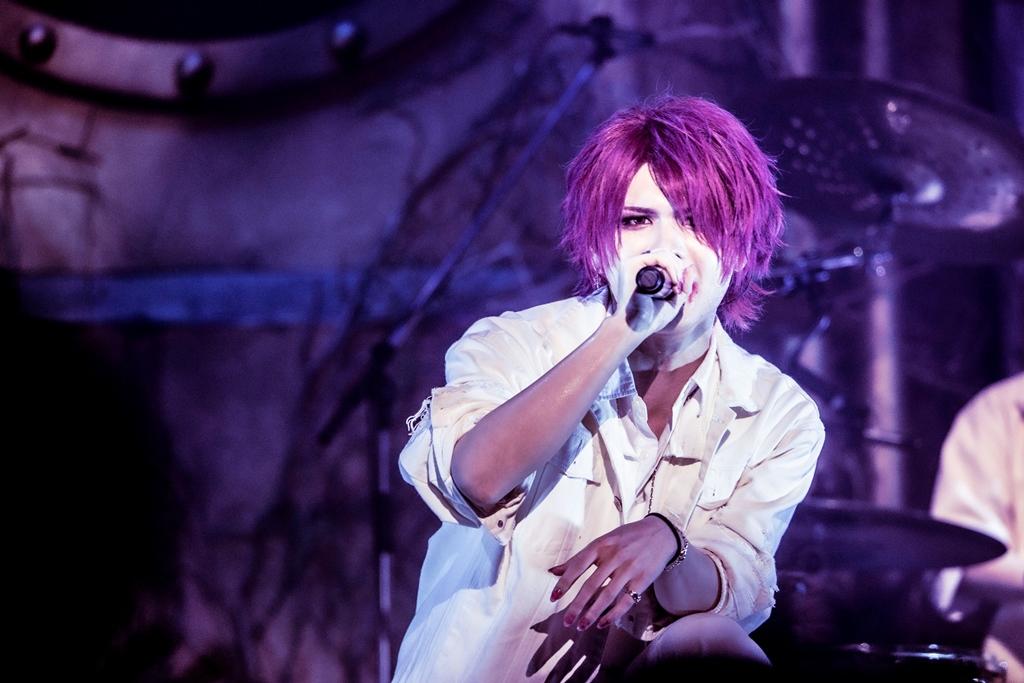 During the first MC Tomo formally welcomed us to the event with a: “Welcome to Domestic Strawberry Jam!” Name chosen for this year’s event. For this occasion they had literally and figuratively converted the stage into a jam factory.

Even the other part of the title “Strawberry” made sense in Japanese (“Ichigo”) as it was also the same way of saying the numbers 1 and 5, for their 15th anniversary.

This close attention to details -in addition to the always successful props on stage- is what makes vistlip stand out in the visual kei scene inside and outside of Japan.

“OBLATE SCREEM”, “音色”, and “HONEYCOMB（LIFE～夜～Act）” were the most relaxed songs on the setlist that day.

In “OBLATE SCREEM” due to the lighting effects we could hardly see their faces on stage, it seemed like this song was a private performance for themselves, something very intimate.

As the setlist progressed the light gradually returned to the stage until we were swept away by a storm of energy with “New ERA”, “TIMER” and “偽善MASTER”. 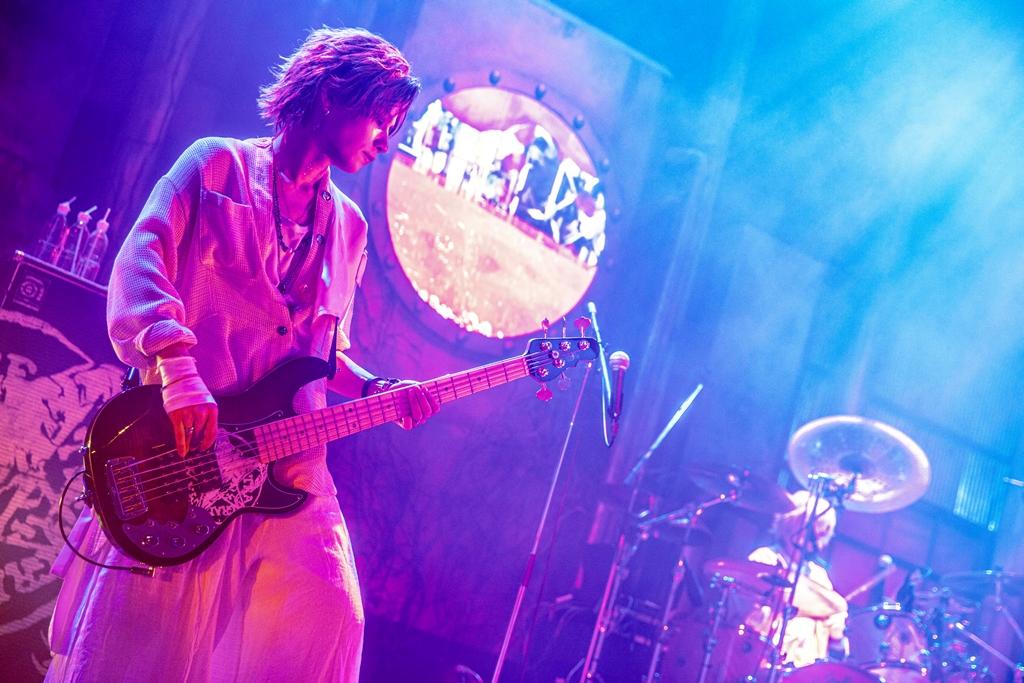 When we could hardly continue dancing after such an adrenaline rush, the party was still in crescendo with “LION HEART”. All vistlip members took part singing whatever they felt like at the time.

Starting with Tohya with a pair of sunglasses and his innate charisma, he got off the drums to go to the center of the stage and began to cheer up the audience.

Although the one that surprised us the most was Rui singing a fragment of a song by the famous idol group “Arashi”!

The lighting turned dim as the members left the stage but it didn’t take long for the fans to start clapping incessantly for the encore since yelling is not allowed due to the pandemic.

To the delight of many the first to return was Tohya, who, to liven up the party presenting us with his particular mix of “P.U.C.” A funny song about animals…

Specifically the acronym for Panda, Usagi (rabbit in Japanese) and Koala.

Tomo appeared on the scene asking: “I wonder what is the wish you have made for Tanabata… Let me sing mine today: I would settle for the simple fact of seeing each other here again next year.”

Then the rest of the vistlip members also gathered in the center to get back to business.

It was the turn of “OZONE”, the favorite of many that day. The synergy between fans and band reached such a point that even the smiles were synchronized in Odaiba. 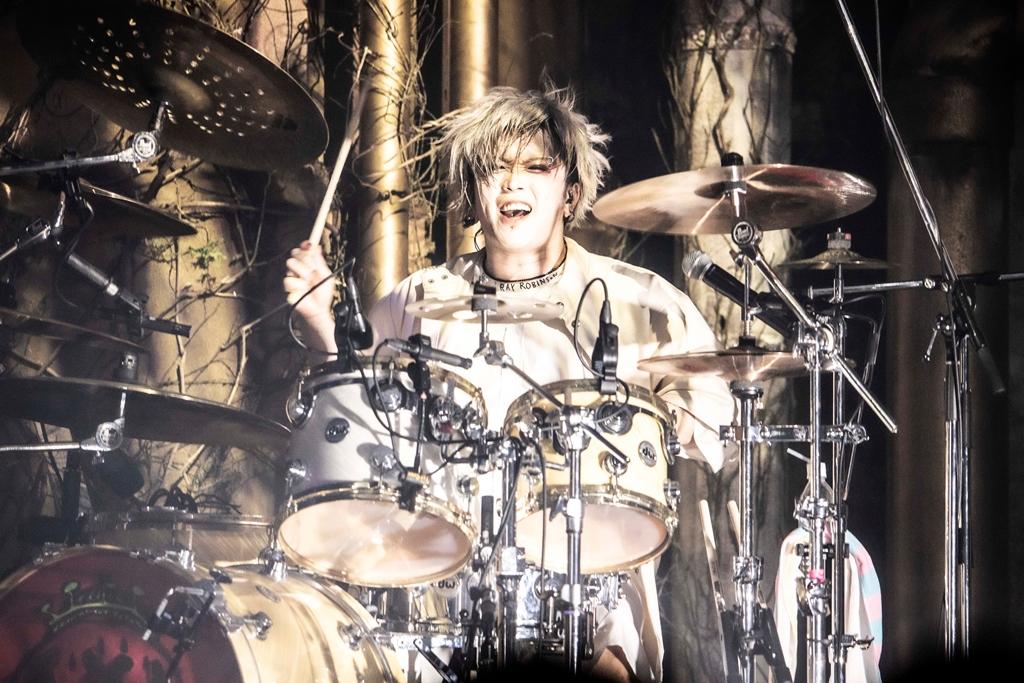 Tohya’s drums seemed unstoppable resonating above the rest of the instruments and somehow leading the rhythm.

The entire audience dedicated a “saku” to the stage as the final touch to the song.

(Note: <saku> is a common practice in visual kei concerts in Japan that consists of opening your arms towards the band or a particular member, as a sign of thanks while enjoying the music). 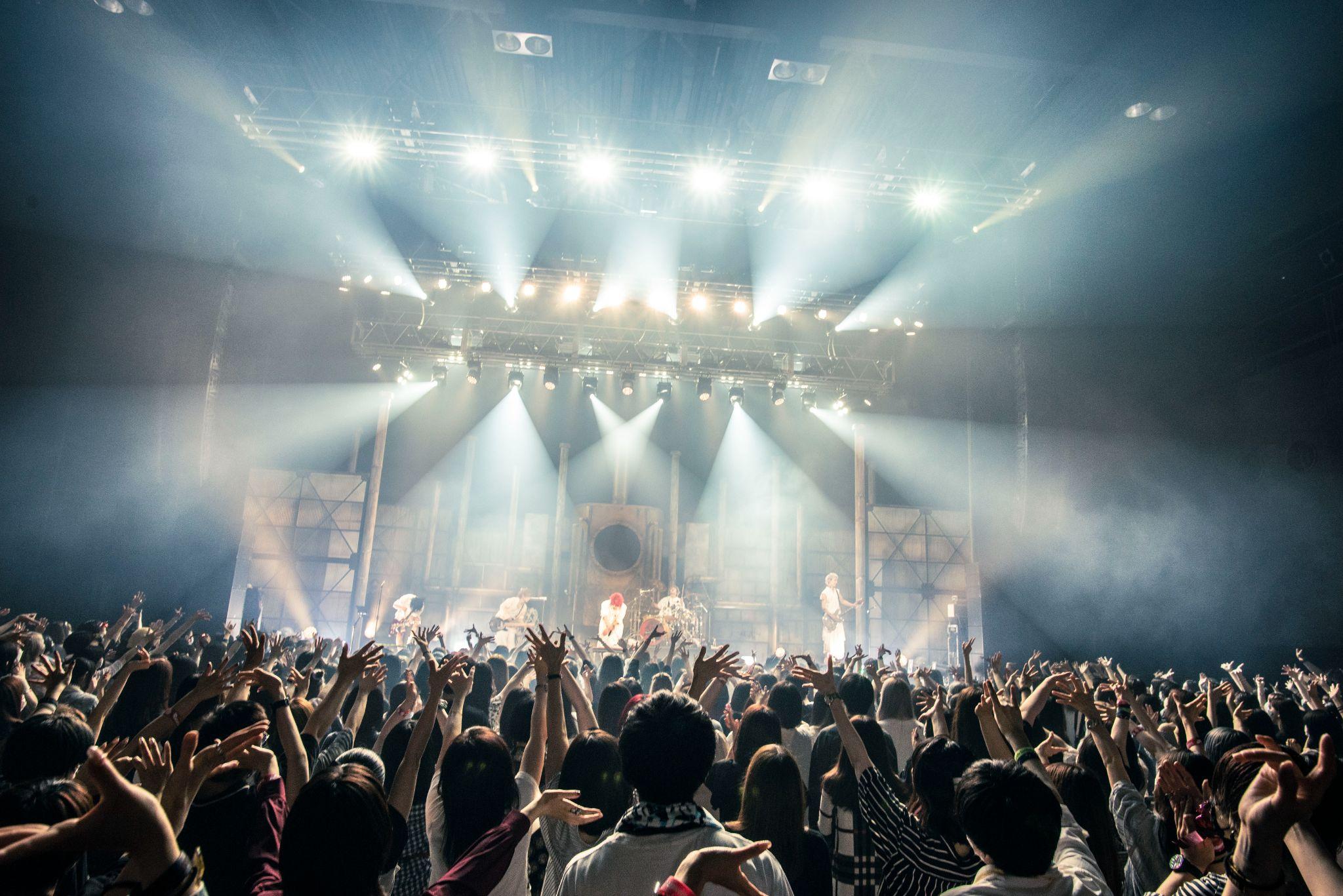 It was amazing to see such cohesiveness in a place with so many people like Zepp DiverCity.

At the end of “Hameln” some commemorative ribbons with the name of the event shot up to the top of the ceiling creating a beautiful image similar to the fall of the sakura flowers. 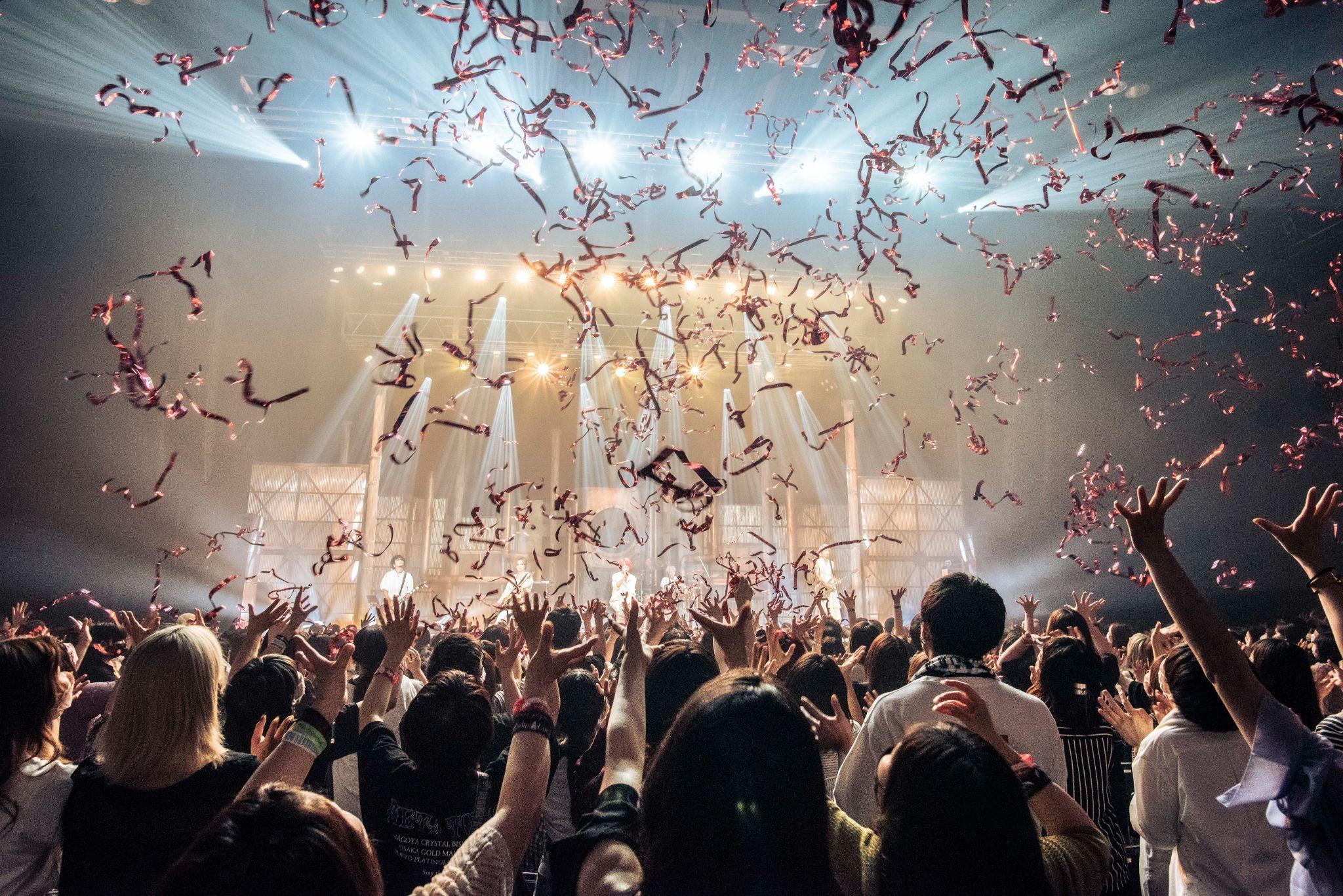 Fans rushed to keep some as a souvenir as they had details about this anniversary.

“15 years…” Tomo commented reflectively, it was evident that he was getting sentimental. He went on to say, “Fifteen years ago I found the friends I was going to form a band with. We have been through many starry night on this road. Thank you for being our stars and always supporting us… Please continue to guide us in the right direction!”

Another moment that was the delight for any music lover was “NEXT”. 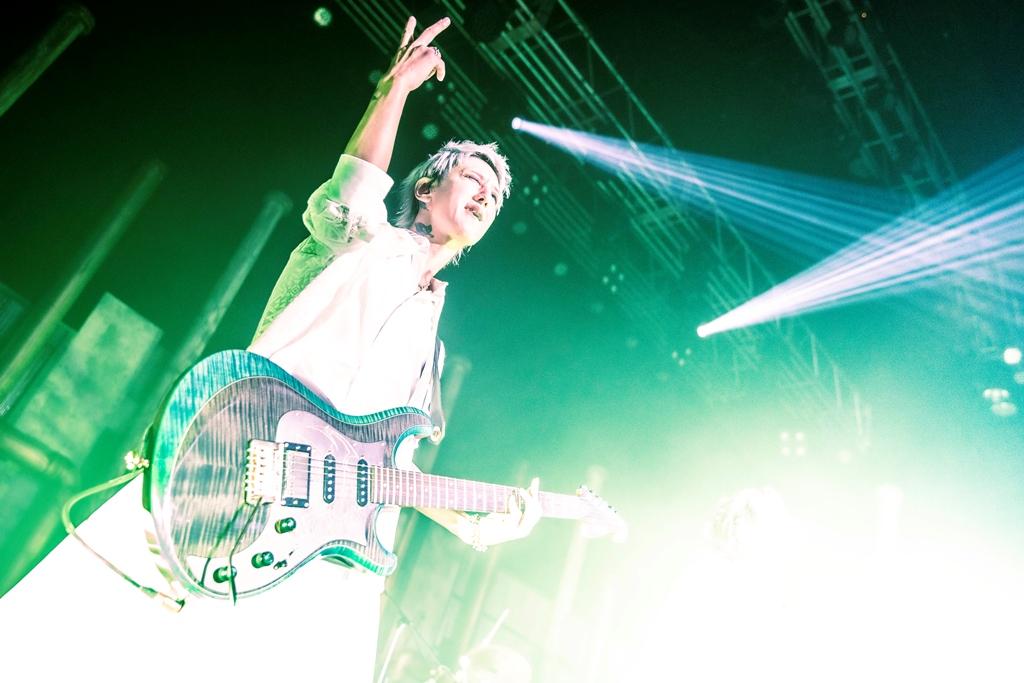 All the members had their moment to show off doing solos with their instruments, evident proof of all the progress they have made during their career as Tomo had commented before.

“July VIIth”, one of the vistlip songs best known by veteran fans, transported us to a sea full of stars -almost literally- thanks to the glowsticks that the fans took out and the disco ball that was in the center, where the light bounced off the ceiling 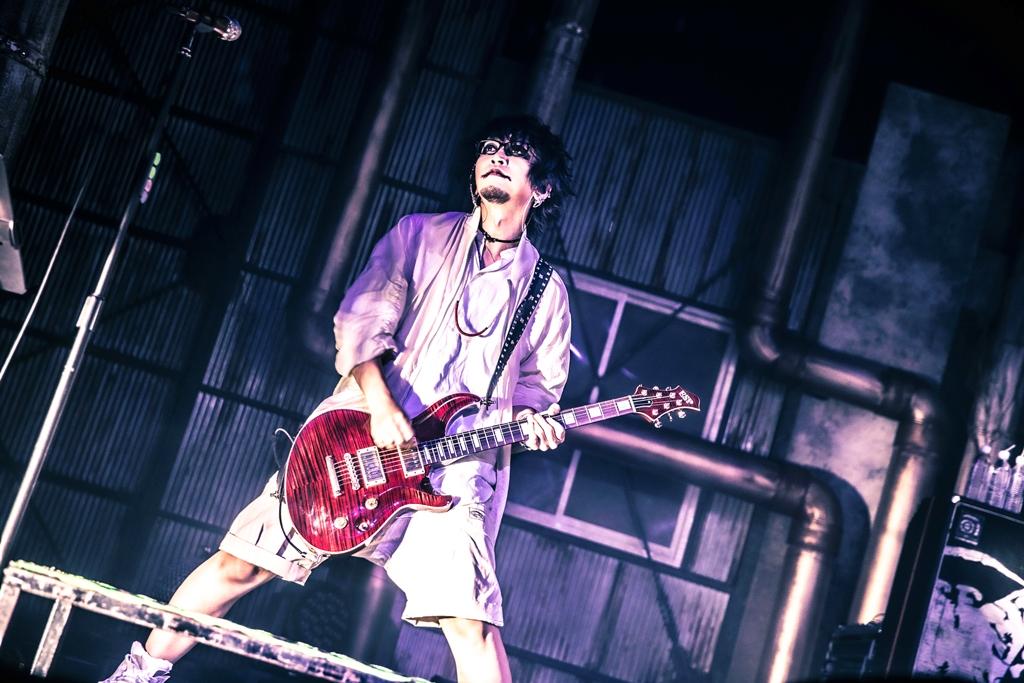 Tomo sobbed as he said, “I didn’t plan on crying, but it’s been a very significant day…”

The other 4 vistlip members came up to him to cheer him up. Once he managed to catch his breath he went on to say: “The world has become a place where artists like us have less and less room. We’ve been through tough times, but we’re definitely not going to give up! We will continue to strive to celebrate this day next year!”

Fans jumped to confirm the promise.

To finish they gave us one last gift. Yuh joked that today it was allowed to take photos on the “stage” even though they were still on it. 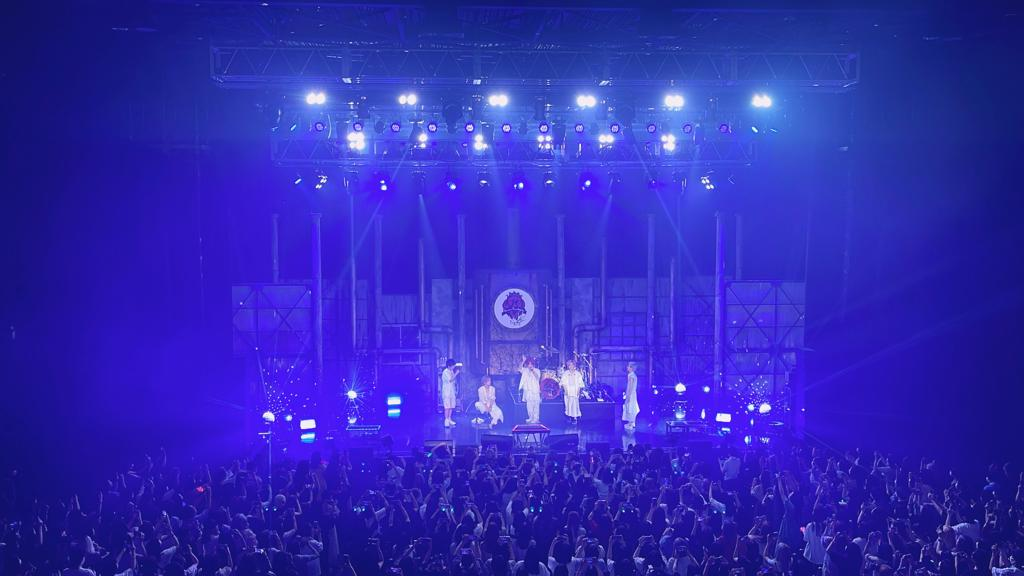 This is somewhat unusual for concerts in Japan. Taking photos in general is generally not allowed, but today was a special day and vistlip wanted us to have our own personal keepsake.

“As we had promised for the fifteenth time,

We will be waiting for you at the agreed place.”