NIPPONGAKU is based in Osaka, so it was only a matter of time before we introduced Deviloof: Probably one of the most influential bands from Kansai (Osaka Region) in the world of metal and visual kei nowadays. 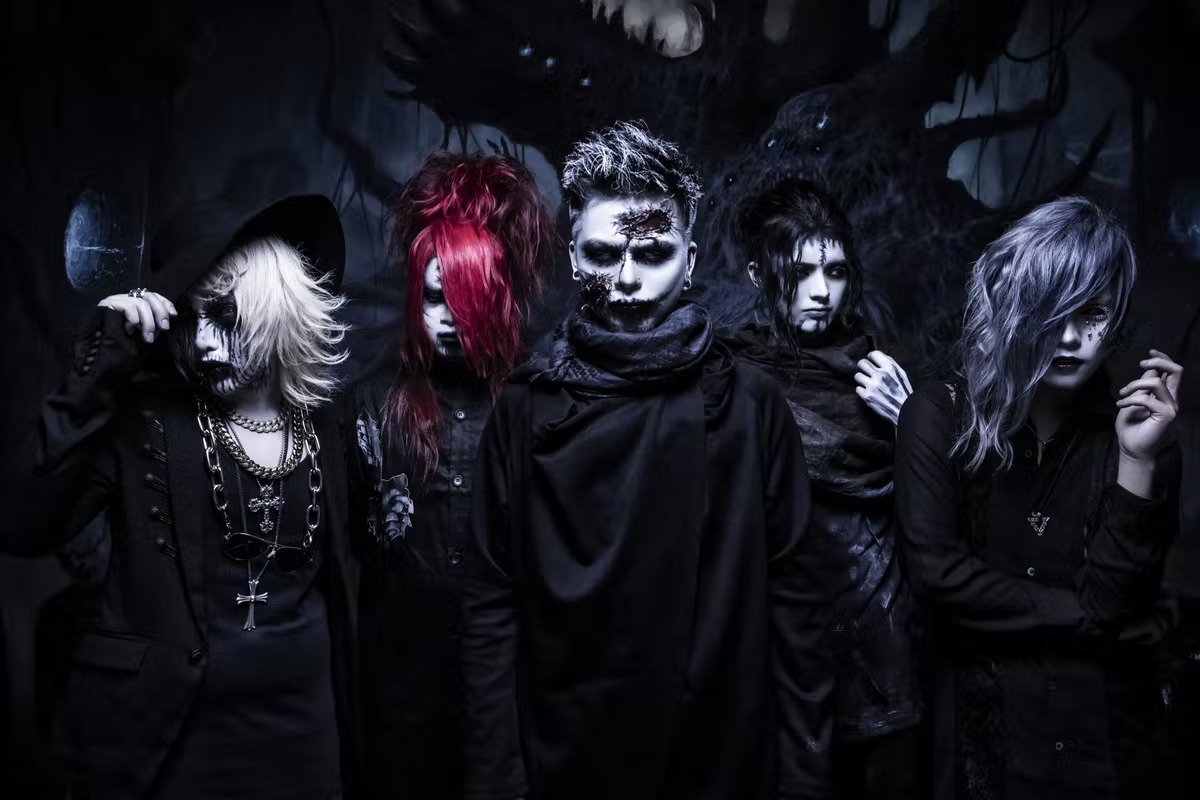 Deviloof, initially known as “Devil’s Proof” is a deathcore band with the added bonus that their performances always have a visual kei presence on stage.

With a purely metal style in their previous band “All must Die”, since the end of 2015 they have the goal with Deviloof of being “the most brutal visual kei band” as per their looks with , let’s say, violent touches and the aggressiveness in their own musical compositions proper of other genres like death-growls and frenetic guitar riffs.

The concept of “Deviloof” as a band -according to Keisuke (Vo.)- is a world created by them, where there is no proof that the devil exists nor all the dogmas associated with it.

A deeper world than we can imagine…

The show that we were able to enjoy was part of the 「DYSTOPIA Returns」 tour that took place in Juuso GABU. Osaka residents probably only associate this venue with “Deviloof” as visual kei bands usually hold concerts more around the Shinsaibashi area 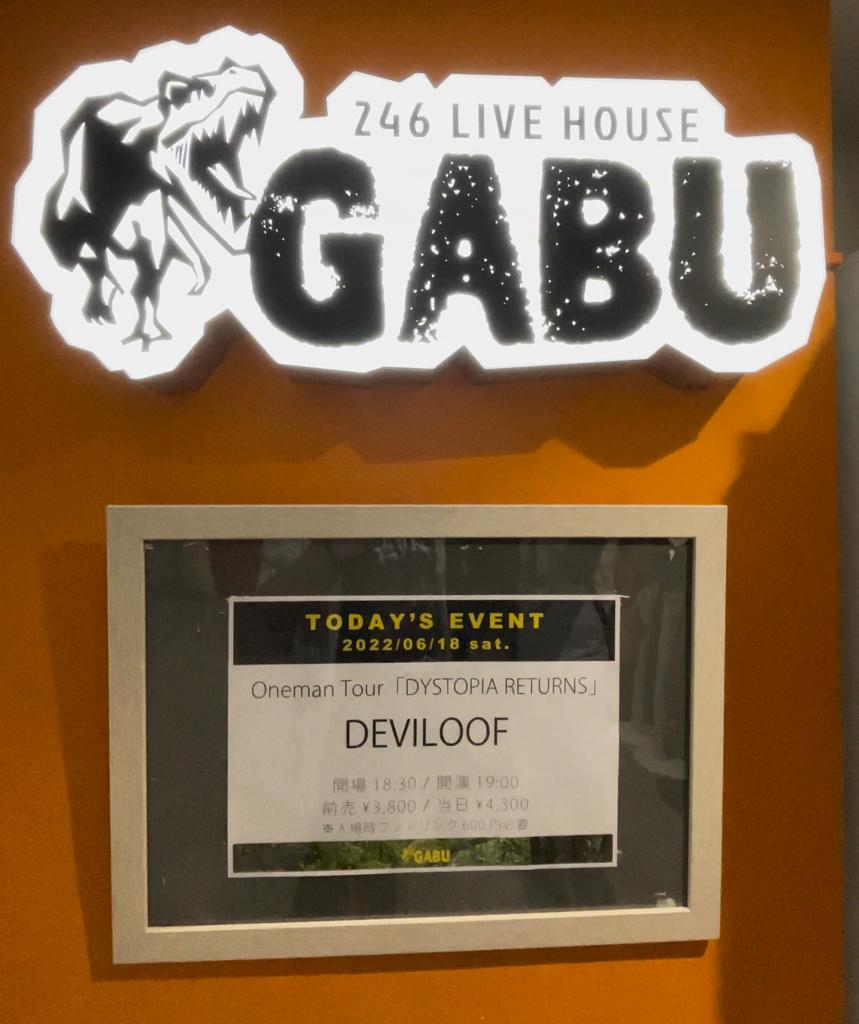 This venue is one of the best for this type of more extreme events, as it has a square shape it allows more movement capacity and provides a good view from all angles..

On this occasion we also wanted to comment on some technical details of the musical composition during their songs, since there are musicians among NIPPONGAKU staff and Deviloof has a lot of nuances to enjoy

Before the show the venue was already quite dark, but at 18:00 it became even darker as the DYSTOPIA SE began.

The blood-red lights and the sound of screeching doors was truly immersive. We felt like we were entering Deviloof’s personal hell.

A demonic opening at the height of the band’s name. The lighting crew really did a great job on this show.

The lights suddenly began to flicker until we realized that Deviloof was already positioned on the stage.

“Orwellian Society” was chosen as the song to open the concert. It was certainly a success to start this tour with a literary reference to George Orwell and his concept of “Utopia/Dystopia” in human societies.

Keisuke from the beginning already has challenged the public to jump and go nuts.

The instrumental part of this song was a delight for every musician present there. 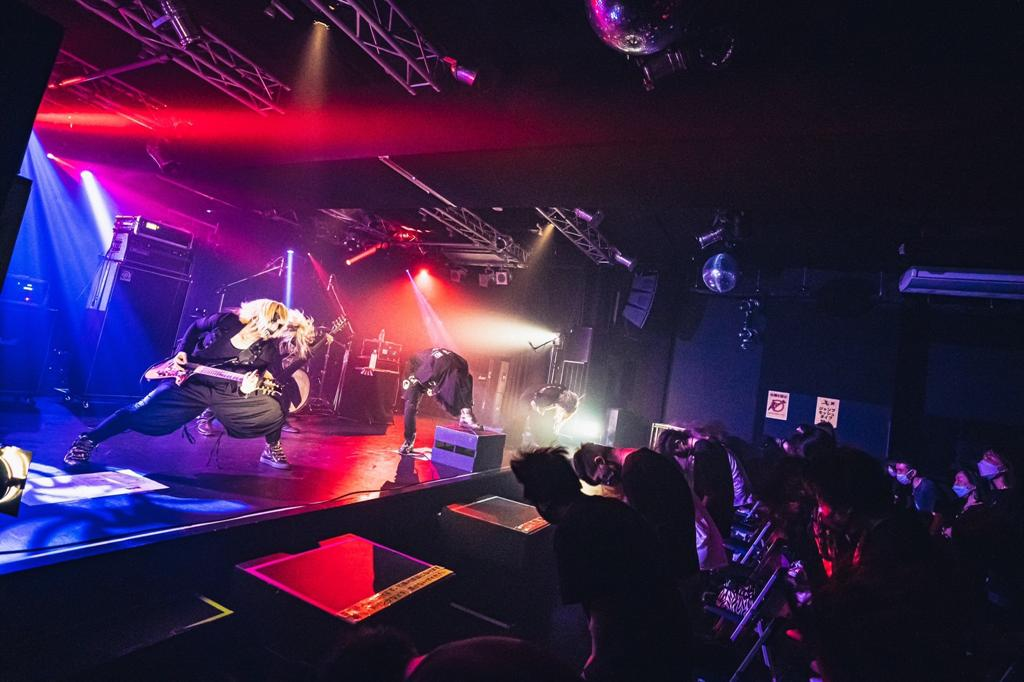 From afar the fans looked like cult devotees bowing nonstop to hard parmuted guitar riffs and the double pedal into a blast beats rocked the stage.

The temperature rose in Juuso GABU as soon as “Libido” began.

Dystopia reigned as its own name states: the lights were shooting everywhere while the fans were headbanging enclosed by Keisuke’s gutturals who seemed like the antichrist leading his faithful ones with classic parmuted slams and dirty blast beats, filling the room with energy.

The aggressiveness was palpable in “Rebellion“, the high pitch in Keisuke’s vocal technique clearly evidenced the European influences of this latest album.

The pace in this song was set by Kanta’s drumming set with a double pedal until reaching the breakdown, this was so wild that Aisaku ended up on his knees stealing the gaze of all the audience that afternoon.

After “Rebellion” the room was lit up in pastel tones, something that surprised us after getting used to aggressive colors. Thanks to this we were able to clearly admire some details such as Daiki using a 7-string fretless bass or the guitar brands of Ray (ESP) and Aisaku (Ethereal) 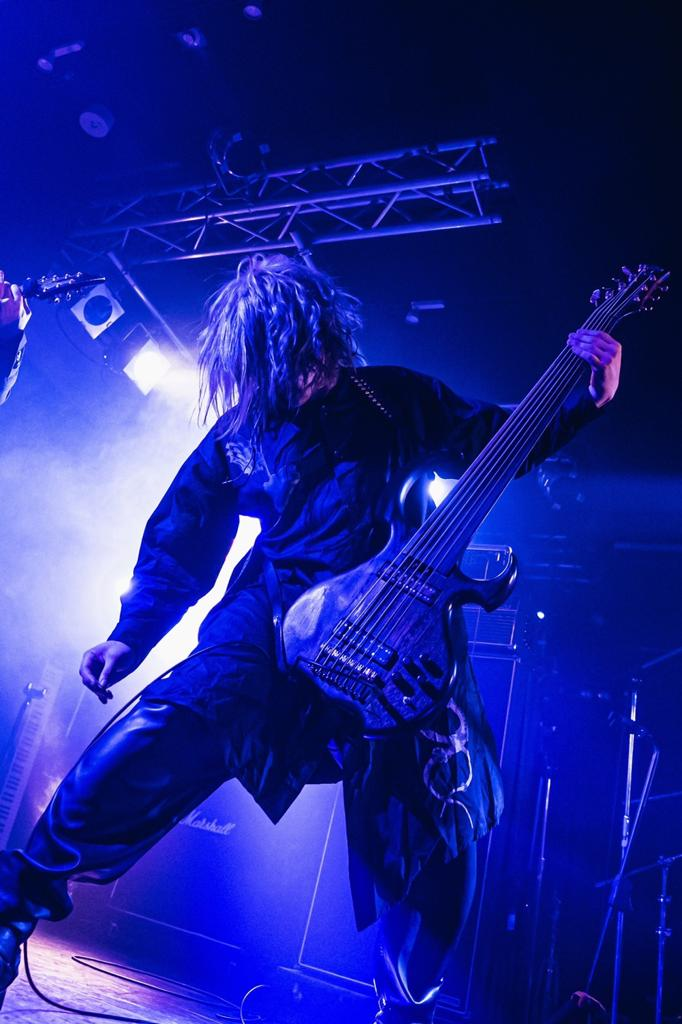 These kinds of details are significant to better appreciate their live music.

The fans really went crazy with “Newspeak”, emblematic song of the new album.

The beginning was brutal, Daiki’s bass slap along the guitar riffs managed to refresh the atmosphere of tension that remained after “Immolation”.. 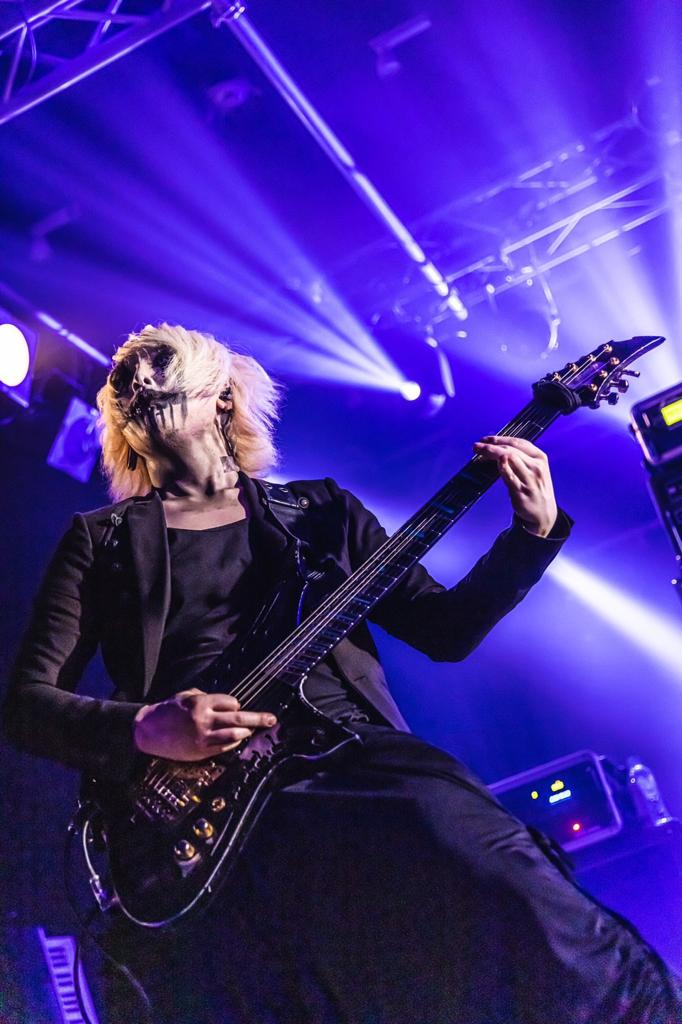 In the middle of the song Keisuke stood next to Aisaku on one side, it seemed that some memorable scene was going to happen, but without any warning the room was plunged into darkness (literally), a shakuhachi and a taiko could be heard which were cut off by a “YOH!” in the purest kabuki style (Japanese classical theater) to later return to metal and continue headbanging

The inclusion of purely Japanese elements such as the wagakki (Japanese traditional instruments) or the kabuki is something that few metal groups have dared to do. Risky songs like these are the ones that have given them international fame compared to other nowadays bands.

Keisuke told us that although until now it was forbidden to shout during the shows in this concert there was no problem in doing so as we were wearing masks.

He asked us if we had already heard the latest album at home and our impression of the new songs. 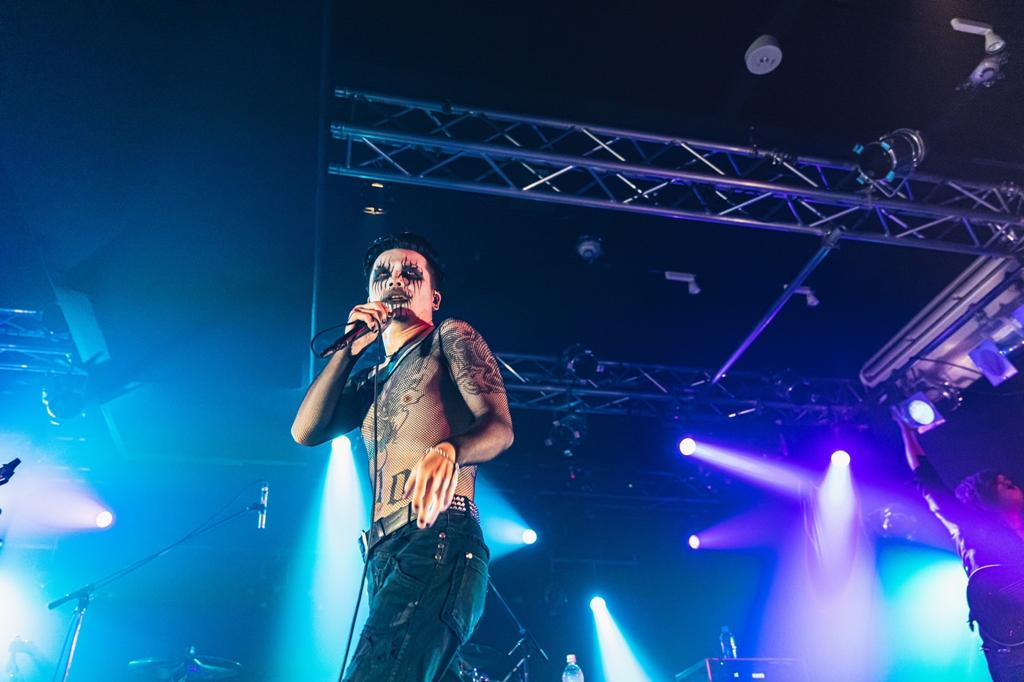 He explained more about the concept of the album:

“DYSTOPIA”, the opposite of a utopia. For those who don’t know, a utopia is an ideal world where everything is happiness, love and peace. So you can already imagine what it is a dystopia. Although a dystopia should not mean that everyone necessarily hates each other.

Many people live in a utopia, but there are also a large number of people who live in a dystopia, this album is dedicated to the latter.

The following song has a very deep meaning for us. I know it’s not easy to listen to the lyrics in this type of music, but I would like you to take a look at the topics that the song talks about when you have time. This song is for all of you who have been “trampled” by other human beings… “Underdog”

You can scream during this concert! I want to hear your voice loud!”

In “Underdog” all the fans were even more energetic thanks to Keisuke’s motivational speech. There is no doubt that he is a natural born speaker, he knows how to find the right words to connect with the public.

Once again they surprised us by mixing styles in “Disclosed Pandora’s Box”. The octaved riffs on Deviloof’s guitars together with the orchestral samples made the tension increase during the 10 minutes that this masterpiece lasts. 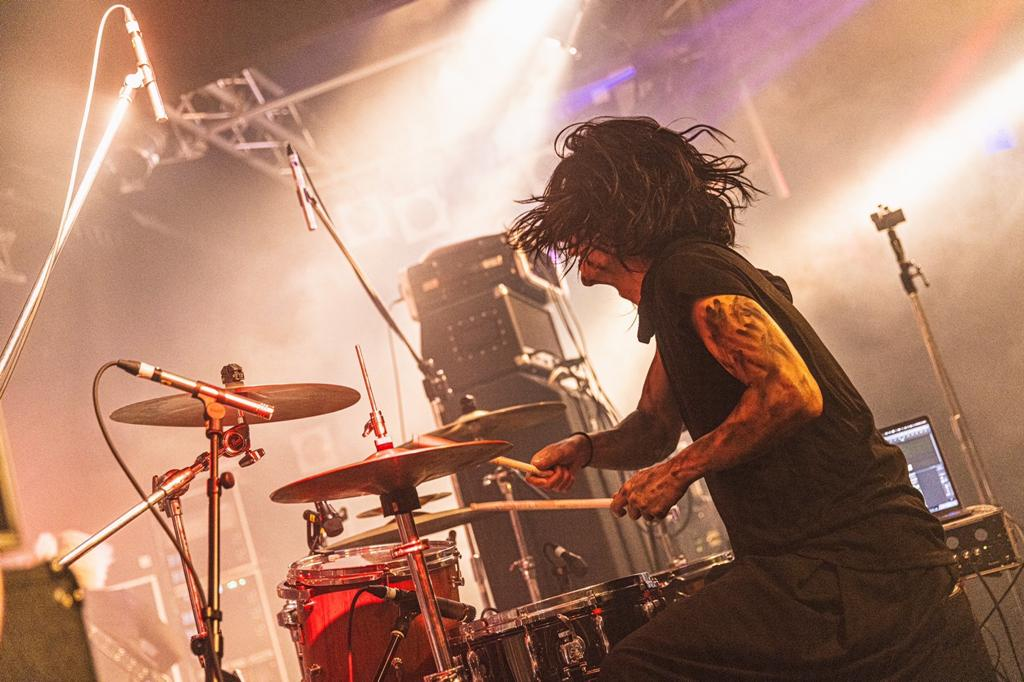 The lyrics reminded us that during this concert we were experiencing what it is to live in a dystopia because opening Pandora’s box means releasing all the bad that this world harbors according to classical Greek mythology.

Anxiety still reigned in the air after this adrenaline rush and Deviloof went to rest while the fans were applauding incessantly.

With the legendary intro “Devil’s Proof” the band returned to the stage to continue rocking it up.

Keisuke thanked everyone for waiting a bit as they were prepared for the second round.

He also joked saying, “I hope you have rested enough too, because now we are going to play… ESCAPE!”

The first rows went crazy as soon as the rhythm of what is probably the anthem of Deviloof began. To such an extent that within a few seconds the rest of Juuso GABU was also immersed in a group headbanging 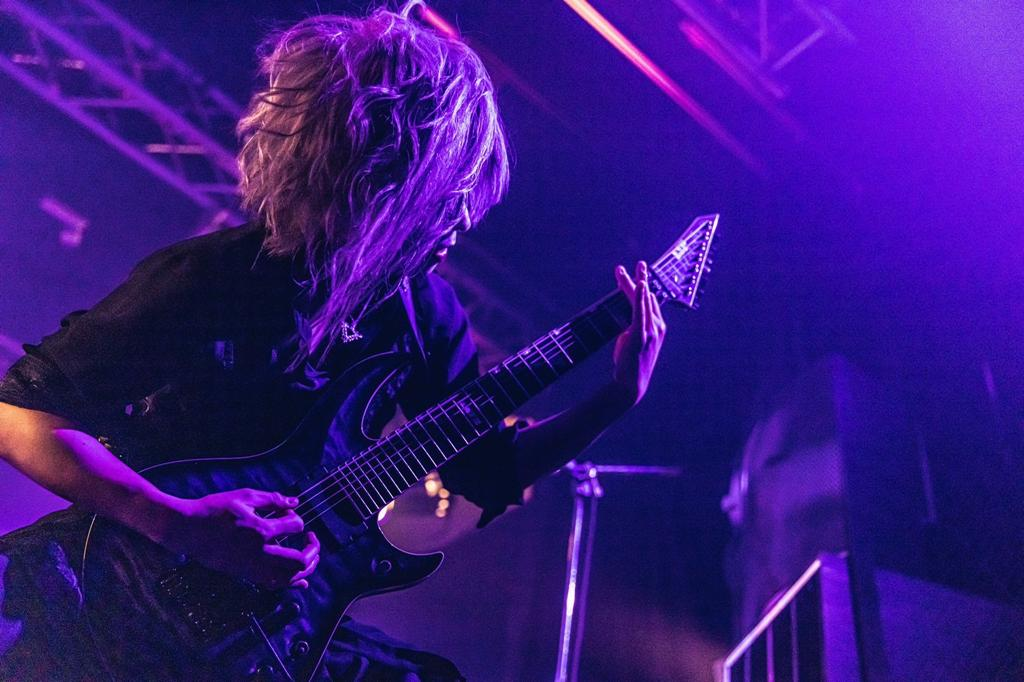 At last we could clearly hear Keisuke’s clean voice during the chorus, this coupled with Ray vs Aisaku’s guitar duel in the center of the stage made “ESCAPE” to be one of the moments for which it is still worth attending concerts of metal and visual kei.

This second part of the concert was a brief tour of the best of DEVILOOF’s musical career.

“Is this really your limit…? I’m going to be honest with you… The other day in Fukuoka there were half as many people as you today, but we could hear them much more! I’m disappointed because we’re playing at home, Osaka.

ARE YOU SURE YOU CAN’T GO FURTHER? I WANT TO HEAR YOU SINGING THE NEXT SONG! I WILL GIVE YOU ANOTHER CHANCE!”

During the chorus of “DESTINATION” we could appreciate Ray’s vocal technique in the choirs. His clean voice made a great contrast to Keisuke’s deep voice.

It was also a good idea to choose this song to show Deviloof that Osaka could also live up to the rest of the tour. The melodic rhythm was perfect to make the audience participate. 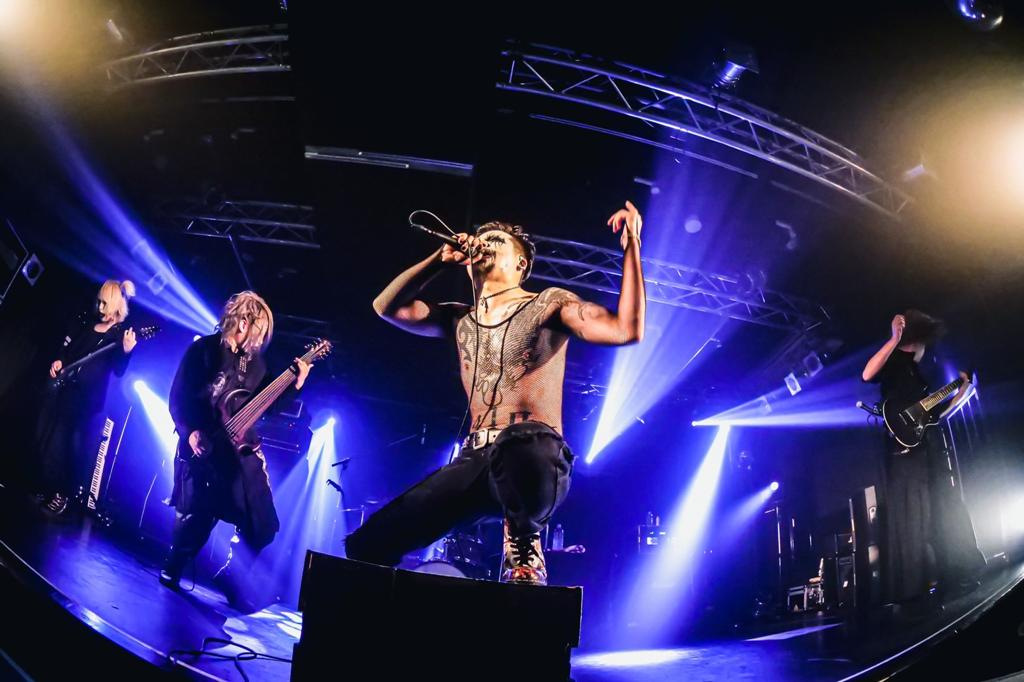 To end the concert, Keisuke introduced us to all the members of Deviloof during the song.

At the end of “HERO=MURDERDER” Deviloof left the stage. It seemed that the concert was over, but no! Sometimes life smiles at us with an encore and that day we were lucky, shortly after the band returned to the stage to transport us to DYSTOPIA once again.

The song they chose for the farewell was “RUIN”, a song DEVILOOF debuted with in 2016.

The fans were devoted to the cult of DEVILOOF until the end of the show and surely they went home that hot day more than satisfied.

It will certainly be a pleasure to collaborate with DEVILOOF again in the future.

We can’t wait to find out what innovations they will surprise us with in the next album!