It’s at Spotify O-West, a venue filled with pictures and memories, that  Vivarush delivered the last performance of their summer oneman tour on August 6th.

A lot of funny, or blurry pictures taken by the band (even backstage exclusives) were hung all around the venue, from the lockers all the way to the bar. The Vivarush fans, called Dreamers, were quick to secure their spot in the venue, before walking around the place, laughing and commenting on the shots (that they were previously asked to not photograph).

In a festive atmosphere, the curtain opens as the band comes in, glittering balloons on the ceiling, red lights, and the colorful band logo at the back of the stage. The show starts with “Yami#Agemi Zone” , an electro pop anthem that makes the audience clap in unison. The guitarist Yukimura starts doing the two step jump and fans do the same. 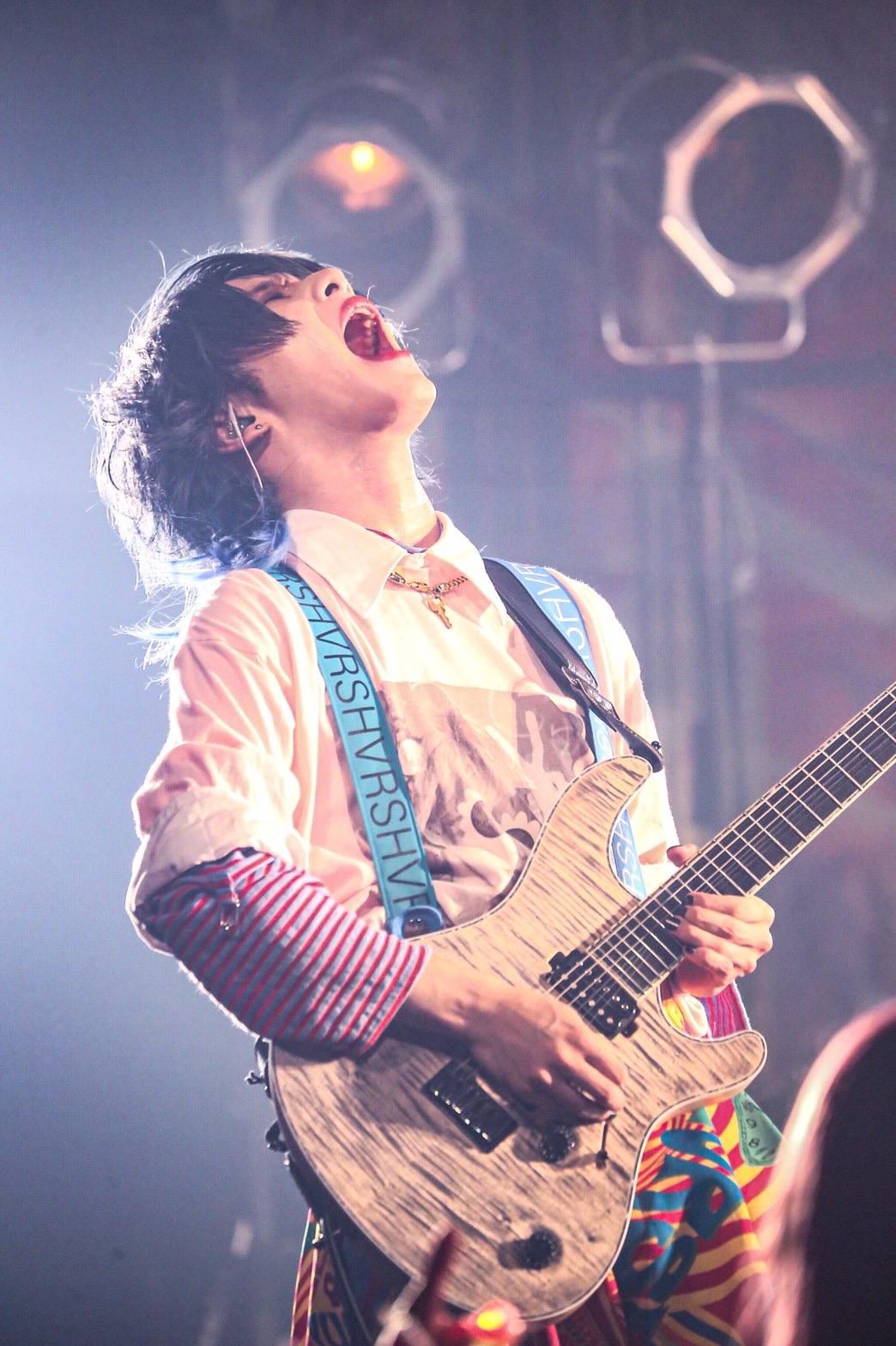 The crowd performs the furitsuke to the song in sync, their movements intensified by a sea of LED finger rings (that were handed out at the entrance of the show, but most of the fans already brought some themselves).

Ruimaru, the flamboyant vocalist of the group, introduces the band and lets the audience know that they’ll enjoy a memorable live performance.

During “Gigaraba cheri haato” the guitarist Belle has fun gesturing along to the lyrics, while the bangya are jumping on their spot. Both fans and members are enjoying dancing to the beat, until even Ruimaru starts headbanging during the last fast-paced part of the song.

The band then moved on to “Shiwakucha gyaru wepon”, their latest release. Fans are already well-prepared, as the band usually releases videos of the furitsuke for the new songs.


The drummer Pamy doesn’t forget to throw the infamous gyaru peace pose with his drumsticks.

As Ruimaru invites his crowd to live and enjoy the moment, the highlight goes on the bassist Toya, opening “Tapittechimachogori”, a hymn celebrating the deliciousness of bubble tea. 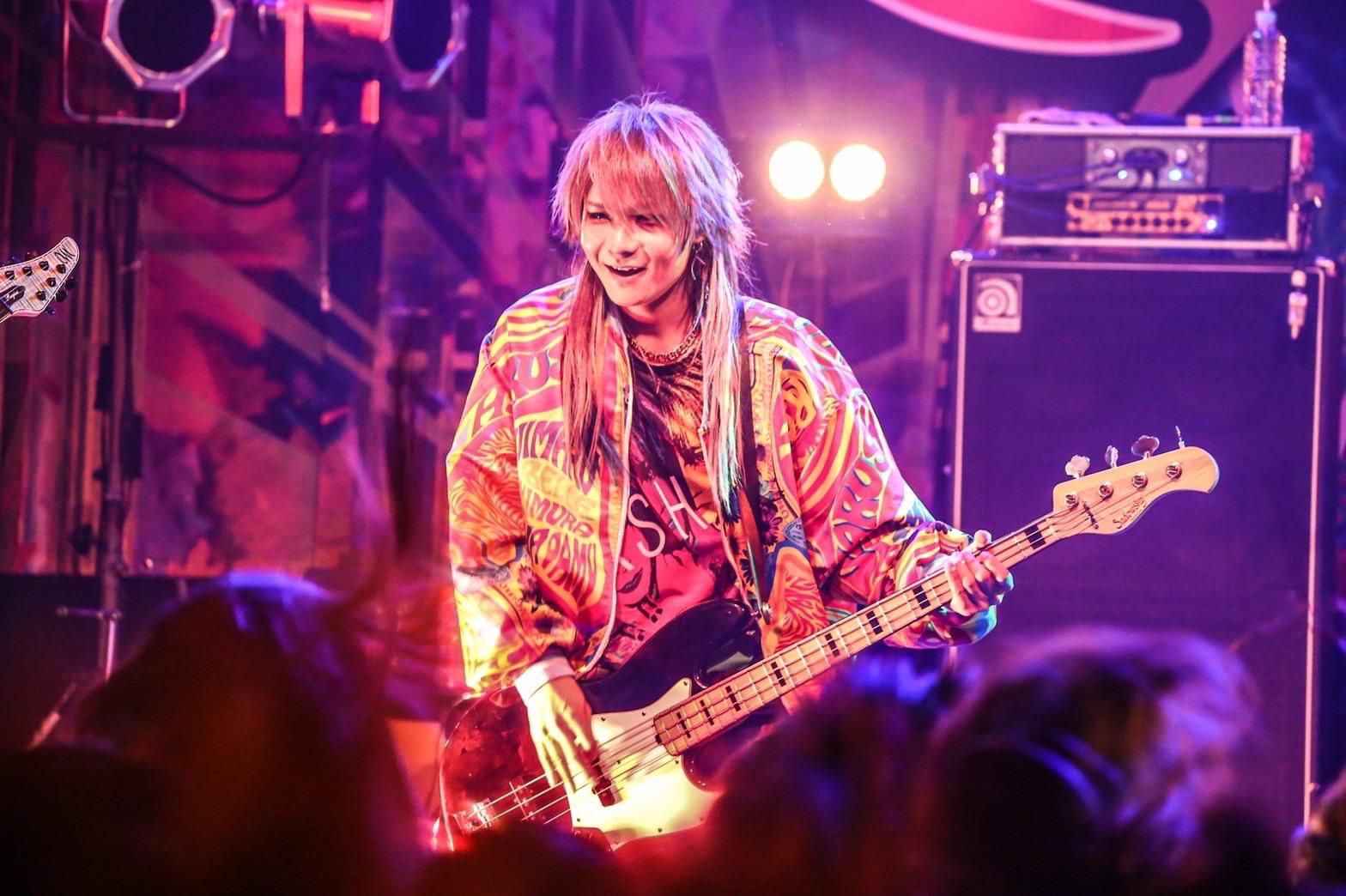 During the first MC, Ruimaru points out the number of cameras recording the show. “There’s no way you’ve ever seen that many cameras right?! What if we’re just recording it for us to enjoy it afterwards and we just never share it?!”.
And when his earpiece gets stuck, he jokingly panics “we definitely have to cut that part off!” followed by the drummer Pamy suggesting to only publish that part on Youtube, making the audience snort with laughter. 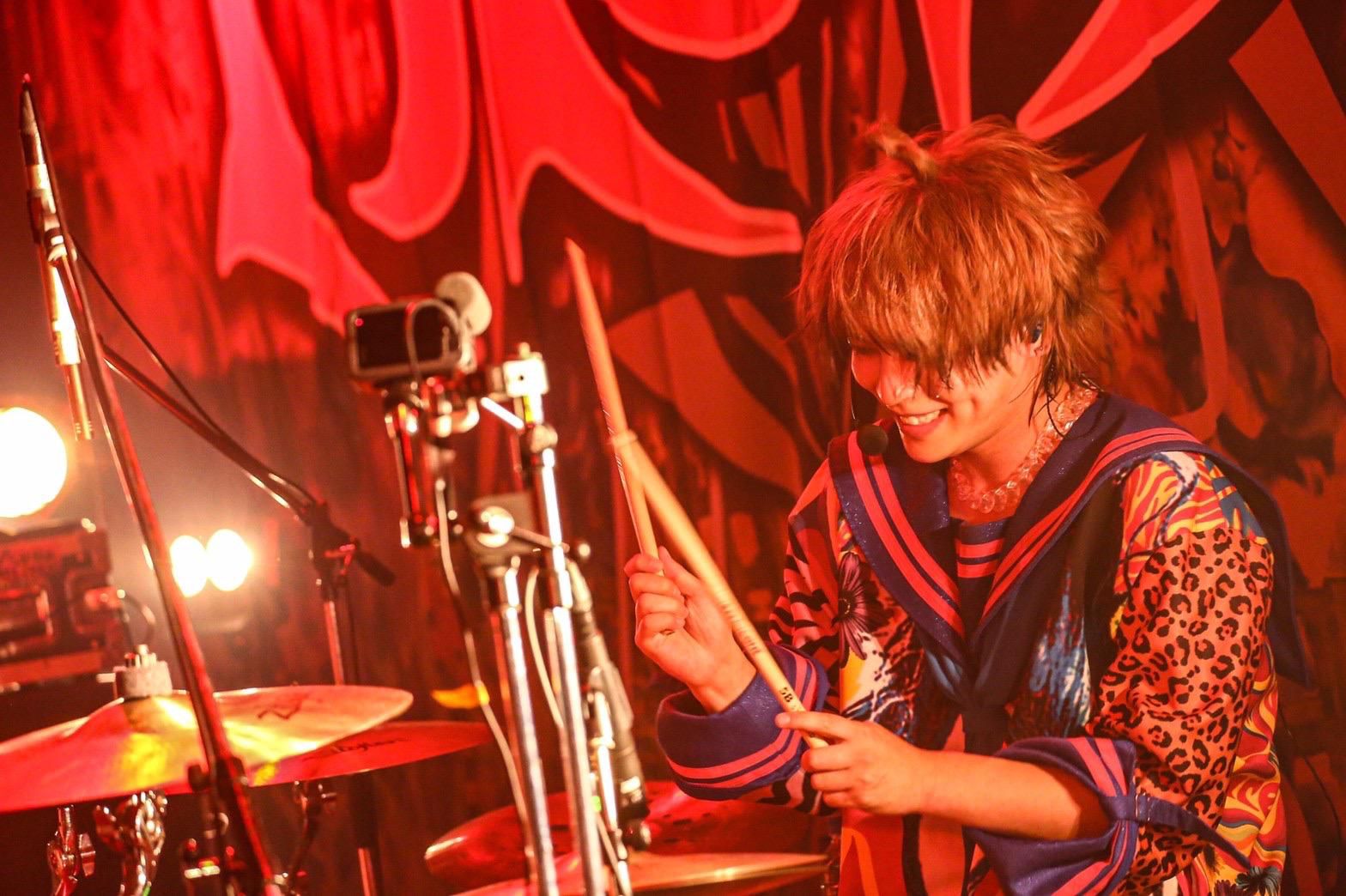 During “Bi⚡ Bi⚡”, the crowd quickly lights up their bigger lightsticks to dance. Guitarists and bassist approach closer to fans, and enjoy exchanging signs and making cute faces to the crowd. The atmosphere is electric, both band and fans feed off each other’s passion. Ruimaru, with the microphone in one hand and a lightstick in the other, is restless, twirls his signature yellow light to the rhythm.

The enthusiasm is at its peak during “Sore yuke! bangyaruchan” Yukimura looks focused on his guitar playing,while everyone else is partying to this song about the bangyaru lifestyle.

When “Merry-Merry-Merry-Go!!-Round☆”, the band’s debut single, starts, the intensity keeps on increasing and it gets warmer in the venue. Whilst the vocalist throws heart signs at his audience, the members frequently exchange smiles and laughs with each other. The mutual excitement of the artists and their fans creates a comfortable atmosphere, where newcomers are invited to enjoy the music the way they want to. Ruimaru reminds us during the MC, that headbanging, various furitsuke, jumping, dancing, or simply looking with your own eyes, are all valid ways to have fun. He then points out the photos covering the whole venue, explaining that all the pictures were taken with an instant camera and they are all unique.
The atmosphere becomes slightly more relaxed when the band starts “love”, a pop ballad opened by Yukimura’s guitar. Orange lights set a warm and intimate mood in the venue and Ruimaru looks directly in the fans’ eyes to express the tenderness of the song.
During “Century Mermaid”, the disco ball starts rotating. We wouldn’t call Vivarush’s ballads sad or tearful, but the members’ solemnity while playing, as well Ruimaru’s straightforward lyrics,  leave a melancholic vibe in the air.

The succession of these slower-paced melodic songs also gives a break to the Dreamers, worn out after all the dynamic furitsuke that was required of them in the first half of the show.  They can then focus on watching the members give their best.
However, with the band who refer to themselves as the “agemi group” (“high tension because of their positivity”), the relief is short-lived. The speedy rhythm and loud riffs start resonating again in the Shibuya venue. During “FANTASTIC FLY HIGH”, Ruimaru slightly detaches himself from his smiling face to display a more serious and captivating attitude. Vivarush’s shows’ dynamic could usually be described as having a setlist full of powerful kira kei songs with intense furitsuke, and funny and optimistic MC in between. This is why during the following talk, the members share their memories and fun stories of touring (how they waited 45 minutes in a family restaurant to get their food served, but ate in 6 minutes, or the kilometers driven by Pamy around the country).

The audience gets wild during “Odorasareta jinsei”,one of the hit songs of the band. The catchy bridge and the furitsuke gained popularity on social media networks such as on Tiktok, where the song was used and viewed more than 5 million times! The crowd gets wilder, giving back to the band their positive energy. 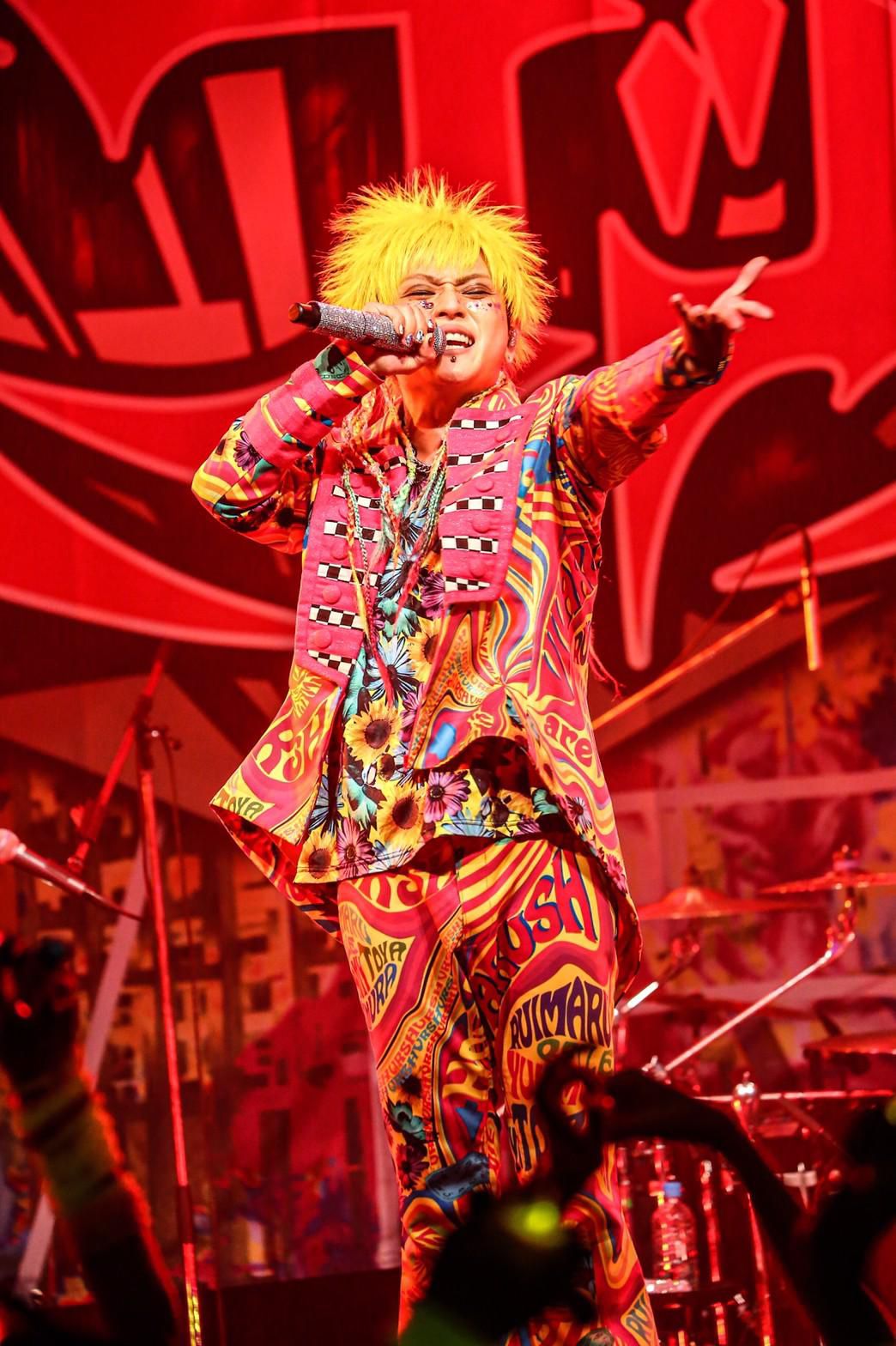 Ruimaru then delivers one of the iconic emotional speeches of which he alone has the secret. He thanks the fans before making all of us question the meaning of love. He explains that the relationship between Dreamers and Vivarush is quite strange but unique: “because we may not know each other’s real names or birthplaces etc., however we both want happiness for each other”. He thanks the audience multiple times, the staff and even turns around to thank his bandmates, not without emotions.

As Ruimaru calls for the last song, fans excitedly jump, before getting showered by striped confettis. During his MC, the moodmaker made it clear that through music and lives, the aim of Vivarush was to bring joy and love to their Dreamers. This desire was felt during the last song where the band delivered such a striking performance that even staff and press members’ couldn’t help grinning under their masks.

After the band leaves the stage, fans sit and clap their hands in unison, the only way to request an encore under corona regulations. The lights go out, and a screen displays an announcement. Fans contain their screams when the band announces a new winter tour and their new looks! 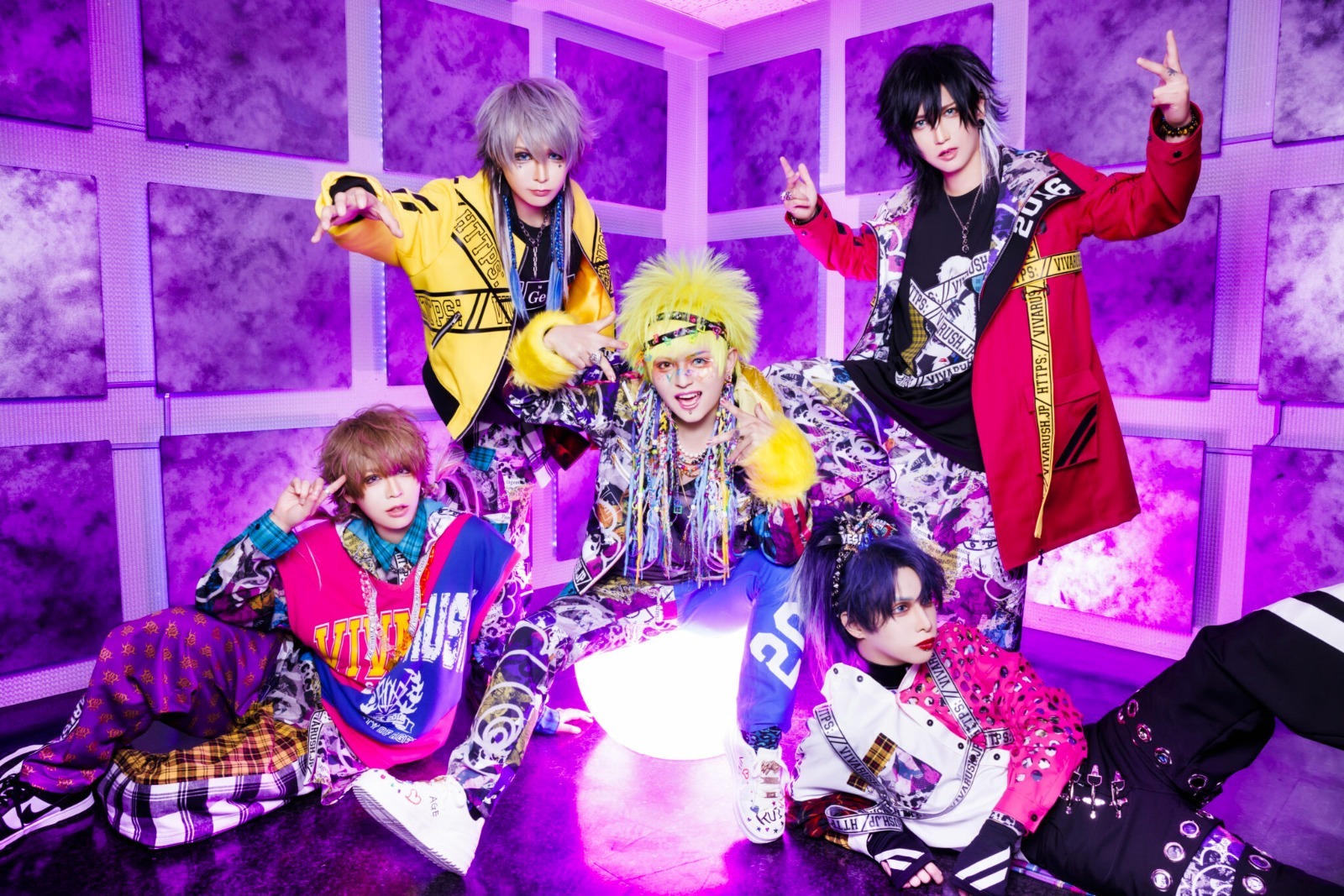 The members come back on stage for the finale songs, and as expected by the title of the show  “Stockings overhead!!” (顔面ストッキング!!) wear stockings on their heads! Fans burst into laughter, as the band sings that “they will get serious from tomorrow”. They then proceed to take off  the stockings , making sure everyone could see their struggling funny faces. Ruimaru’s hair and glittery makeup are almost entirely ruined by it so he quickly runs backstage to fix them. 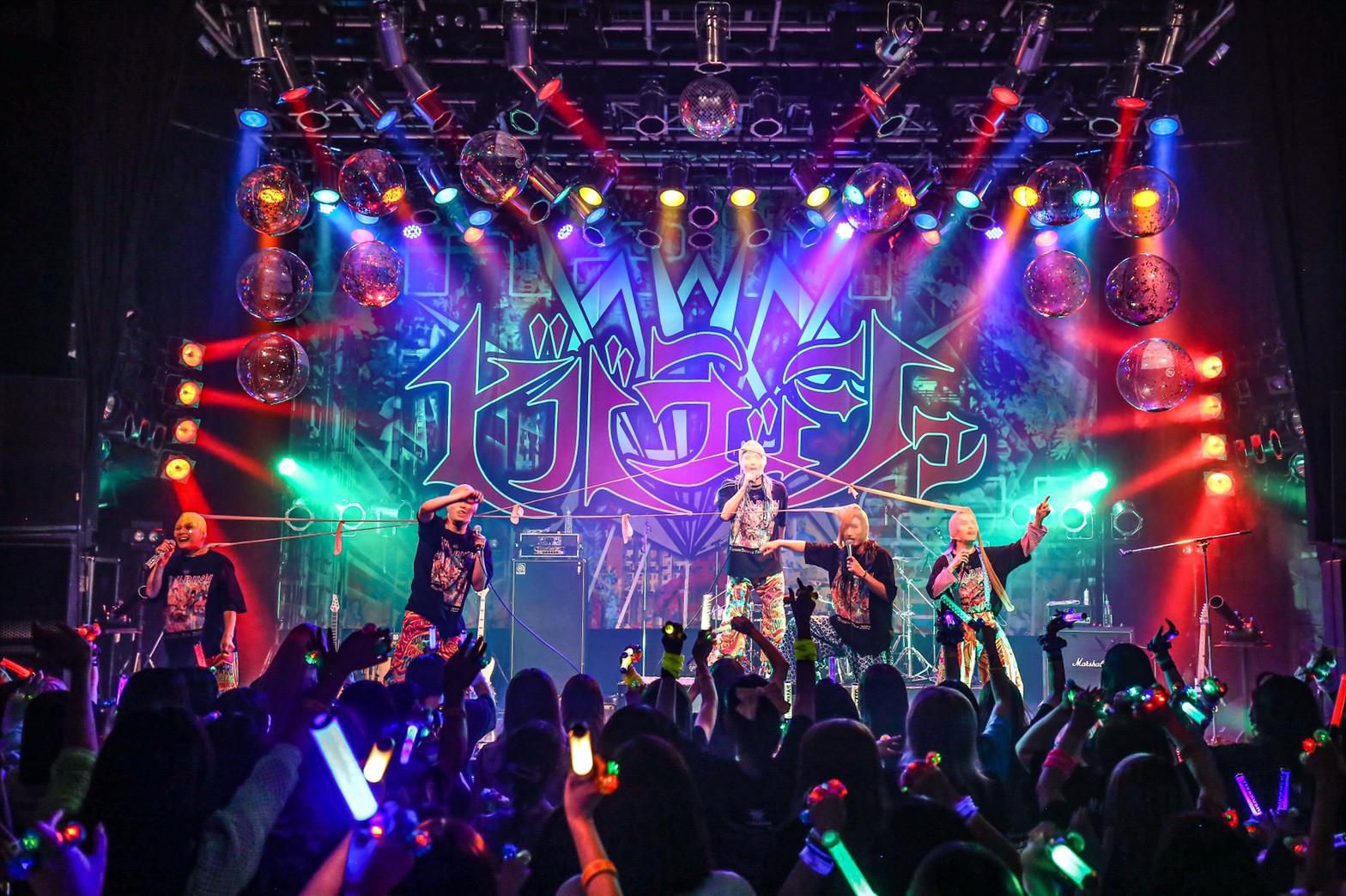 It’s all glammed up and refreshed that he comes back and the band starts discussing their feelings about the tour coming to an end under the current circumstances. The bassist Toya recalls that he couldn’t perform two shows when he caught Covid-19, and recalls with a lot of emotion that he couldn’t stop thinking about everyone’s faces while quarantined. He also thanks all the people who, despite the situation and the other events happening on that day, chose Vivarush. Ruimaru once again delivers an emotionally-charged speech, admitting that there was a time when he started believing that he wouldn’t be able to progress anymore.
“However, being on tour, meeting new people, learning new things, makes me feel like there’s still room for growth.
I don’t remember all the setlists, all the venues, all the songs, but I do remember all the artists I’ve seen on stage. I hope you will remember the memory of today, I hope you will remember you saw Vivarush.”

And after “Morota de Nippon!”  and “Dandelion”, the band takes a final picture with their audience, after doing a gyaru pose.

We enjoyed the dynamic and extravagant performance that Vivarush showed us, and NIPPONGAKU recommend you to look forward to their next activities! 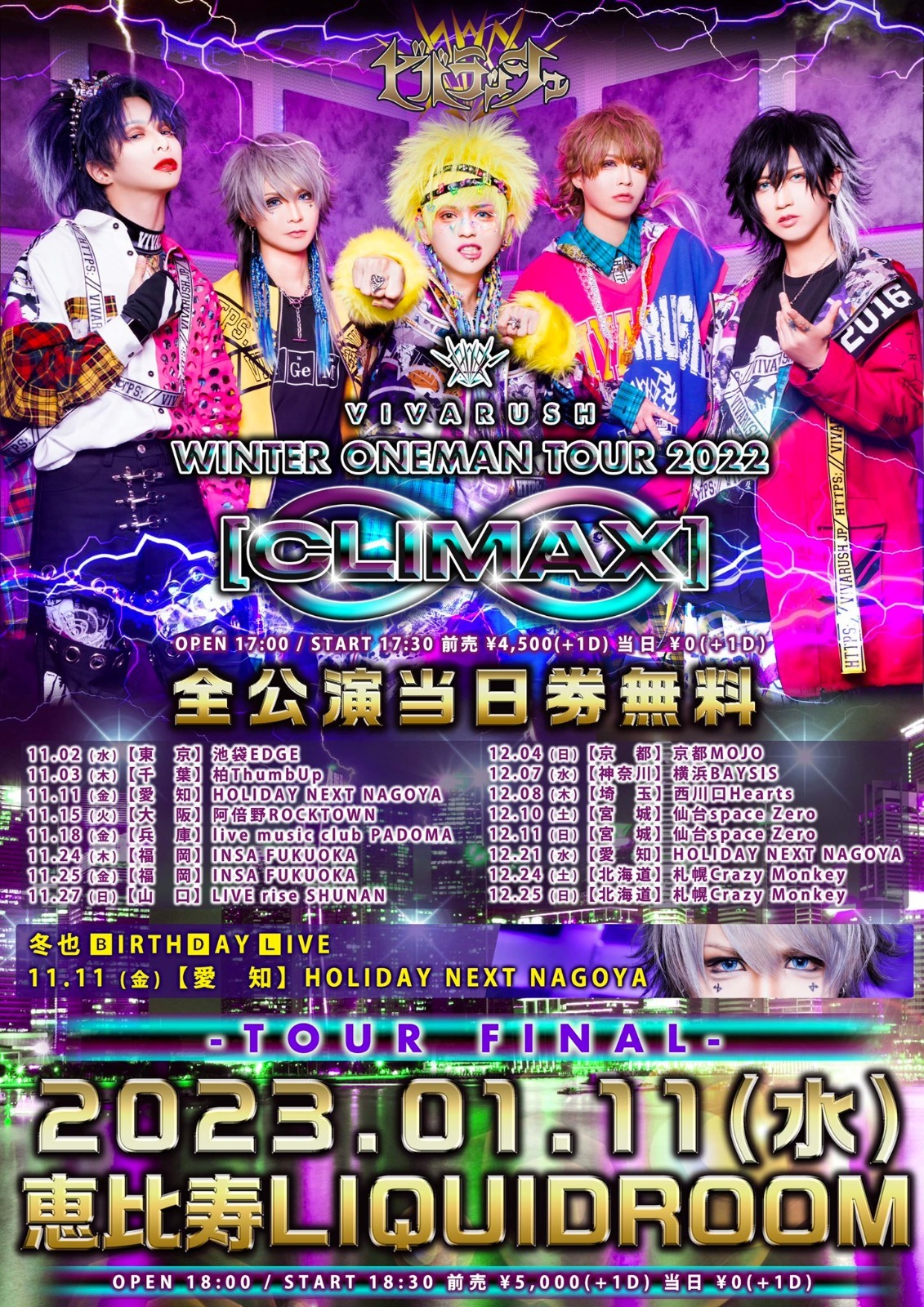 Next week, we will have the chance to sit down for an interview with the members of VIVARUSH.
Do you have any questions for them? Leave them in the comment section below! 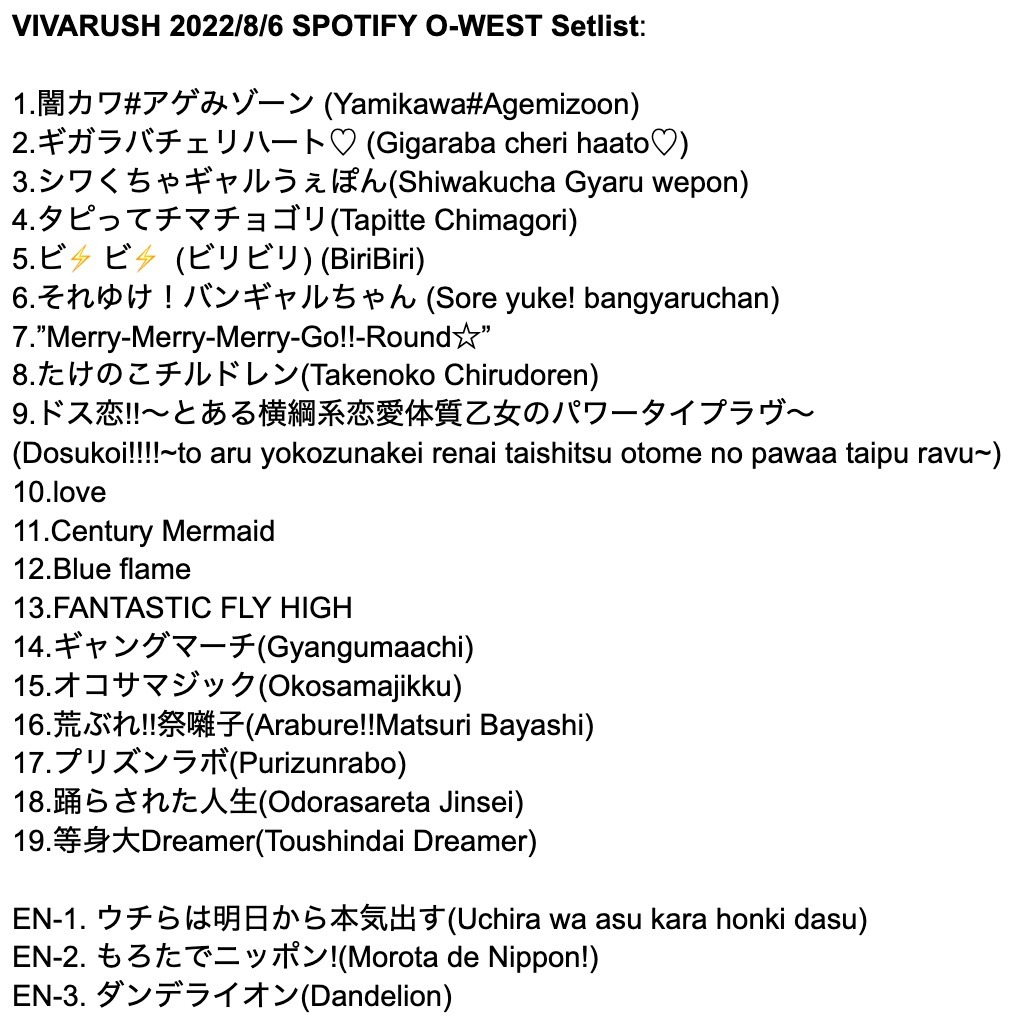