Fukuro launched its first ONEMAN tour “Yomawari #1” in January 2022 with 3 dates along the nipponese country, specifically in Nagoya, Osaka and Tokyo.

We are discovering the new music project of Yoshiatsu, back on stage after DADAROMA’s sudden hiatus announced in 2020. However, this project has nothing to do with his previous band. The music genre differs greatly from what we could expect from today‘s visual kei standards, some people on the internet going as far as labelling them as “Art kei ”.

Another remarkable thing about their compositions is the almost lack of guitars. It might sound quite unusual, but if required, Yoshiatsu plays the guitar while singing. Such a genius! 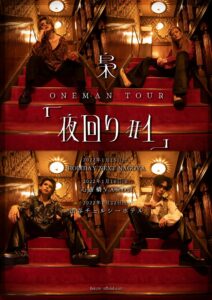 On Sunday 16th we had the chance to take a look at their debut performance in Osaka, at the Shinsaibashi VARON music venue, which was crowded for the event. Despite it being the first tour of the band, the fans seemed friendly to each other and spent their time talking until the show started.


Most of the members in the audience  were wearing the band’s new merchandise for this tour with the owl logo. Watching from the back of the venue and looking at the audience gave us the feeling of being part of “The forest of the Owl” (“Fukuro no mori”, the title of the first mini-album).
Besides that, we could spot some foreign fans who came to attend the show, something rare in Osaka, even more within pandemic times.
For this show, the Fukuro members wore different outfits from the ones shown on the promotional tour picture. Darker tones, with touches of vintage elegance.

Curious to know the details of their new unreleased song?
Take a look at our live report to get a first feel of it! 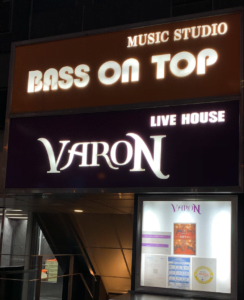 From the front of the live hall to the far back, the sound of an owl was resonating. The curtains opened, the whole band was already positioned on the stage, looking down, getting ready for what was to come.


The show  opened with a piano solo from Daisuke, off the song “Itsuka wa shindeshimau bokura wa” . After around a minute, Yoshiatsu‘s voice joined in.
Shortly after, Yutara added to the melody with deep bass effects, and the lights slowly turned on. The performance gave us a warm feeling. Yoshiatsu was hugging himself while singing, making it seem like he was guarding his owls.

We could note a perfect execution of the instrumental. It is to bear in mind that they are professionals with substantial experience.
The venue turned dark at the very end of the song, fading into shy lights at the back.

After a moment of complete silence, the ambiental rhythms of “ Fukuro no ki ” were transporting us again to the Owl’s Forest. Footage of greenery and rope knots were screened onto the stage.
This time, all eyes were on Lotto as his drum performance became the center of attention. The way he was playing reminded us of a military march on its way to battle. That is until the end of the song when the intensity gradually faded out, as if implying that peace had arrived.


Yutara’s bass with the drums starts a joyful song.The audience helps to cheer by clapping their hands, making “NEO TOKYO” an interactive song. The use of equalizer gave it some 90’s vibes.

For the very first time in this show, Yoshiatsu welcomed the venue verbally “Osaka! Let’s go! We can do it!”

Immediately, the sound of the bass disappeared to let in the composition of “CADENZA”, a progression of melancholic piano notes and drums, all wrapped by the mellow voice of Yoshiatsu who was sensually playing with his shirt following the rhythm.

There was a short break.
Daisuke asked the audience if they had also been to the Nagoya show the day before. Also, he exchanged with Yoshiatsu regarding their gratitude to the staff of the live house for making everything possible that day.
Yutara also took the chance to thank the fans for making it to the show.
Lotto mentioned how life was in Osaka, livehouses he had been to…

The break was over, so it was time to play “Kamisama wa inai kara” The most emotional ballad from this setlist. The fans applauded fervently at the end.

Keeping this ballad ambient, the stage lights turned to an intense blue tone for “Sayonara dake ja”, the instrumental was so static, like it was done that way to give us an awareness of the time passing.

The energy  shifted  when “Vinyl children” started. Its bubble-ish and electronic sounds gave it such a mysterious vibe, the quality label of the Fukurou project.
For this song, the echo of Yoshiatsu singing reverbated through the speakers, gently mixed in with the retro disco tune in the background.

Without any transition, we go into a 180 degree change with the surprisingly upbeat  “Hikyō-sha no romansu”.  It was supposed to be a ballad, but it turned into an absolutely party.
Yoshiatsu’s hoarse voice woke up the rest of the instruments.
The members were really having fun playing this!
Since it was an unreleased song, Yoshiatsu invited the audience to wave their hands up to go along with the melody.

While Yoshiatsu was setting up his guitar, Daisuke introduced the goods of the tour, and suggested while laughing “If you buy too many goods, I recommend you buy the tote bag as well to carry everything inside  safely on your way back home”

After this promotion snack time, As Daisuke was joking along with Yoshiatsu, the pianist recounted what he had dreamed of the previous night. In that dream, Yoshiatsu was showing off the new merchandise of his band on which appeared as the hero of the popular anime “One Punch Man.” Everyone, including the audience, burst out laughing at the bizarre story.

The music is back on the stage with “Seppun” the last song they have released on youtube with a promotional video.  
It was the first time since the start of the show that we could hear the sound of the guitar. Yoshiatsu played the guitar energetically, while seducing the audience with a wide range of vocal tones.

The whole band was smiling a lot during this performance. This composition was the most interesting of their repertoire, between a jazzy and funky style.
The combination of slap and wah-wah pedal evoked a past era that we were able to travel back to the time of a song.

They stopped for a short time, and Lotto started to play a catchy drum melody. The crowd joined him by clapping along… It even looked like the fans had been rehearsing for this!
Yoshiatsu brought a tambourine to the stage. After playing it for a bit, he handed it to the fans in the first row to participe too.

Next on the list was “Bakemono no watashi ni wa” with a strong and colorful rhythm.  Yoshiatsu seemed to still be in fullpower, clapping his hands in a flamenco pose.
Eventually, the song becomes harder, ending with an unexpected circus-like outro.


Definitely, the protagonist of the song “Sociopath” was Yutara on bass. The lights on the stage  switched from the floor to the ceiling following Yoshiatsu’s singing. The flow inspired strength and resilience.

Yoshiatsu grabbed his guitar again, and told us about the next song they were going to start playing. They  had barely rehearsed it, even though it still does not have an official name yet.
He explained to us that they themselves don’t know what kind of music this band is making, what style they are right now, or what style they’re going to be as a whole. It’s purely experimental for now and They’re just enjoying it as it’s happening.

The song starts, the focus is entirely only on Yoshiatsu. This song shows a sensitive and vulnerable side of Fukuro.

There is a break prior to the encore. Due to the restrictions against COVID-19, the audience is not allowed to speak, so the only way to ask for an encore from the band is by all clapping their hands until the lights turn back on.

The band came back to the stage wearing different clothes, the t-shirt and hoodie from their tour merchandise.

An aggressive guitar riff echoed through the stage, opening “Oroka” which had a completely different vibe from the other songs on the setlist. Lotto’s strong percussion work gave the song a bit of a grunge rhythm. Yutara followed on with an awesome solo bass as the rhythm of the song changed slightly.


Lotto, still seeming vigorous, opened with a drum solo. Yutara, tempted by the beat of the drum, played along.
Yoshiatsu encouraged the crowd to use their last reserve of energy, because the concert was coming to an end. He also shared his hope to see at the Tokyo final tour live the same faces that stood in front of him that day in Osaka and the day before in Nagoya.

“Ningen janai” was the song they chose to close this unique show.
The entire color palette of stage lights was combined at once perhaps to signify that they had played all the songs on their CD . This song was the one that had the least amount of piano.
Yutara and Yoshiatsu started to dance while smiling, swinging along to the music like they were at their own disco party.

As this special was fading away,  the band looked at the audience for the last time as they greeted everyone with a “See you soon!” and left the stage.
We are looking forward to discovering more about this experimental project “Fukuro” in the near future.

Don´t forget to check out our exclusive interview with Fukuro! 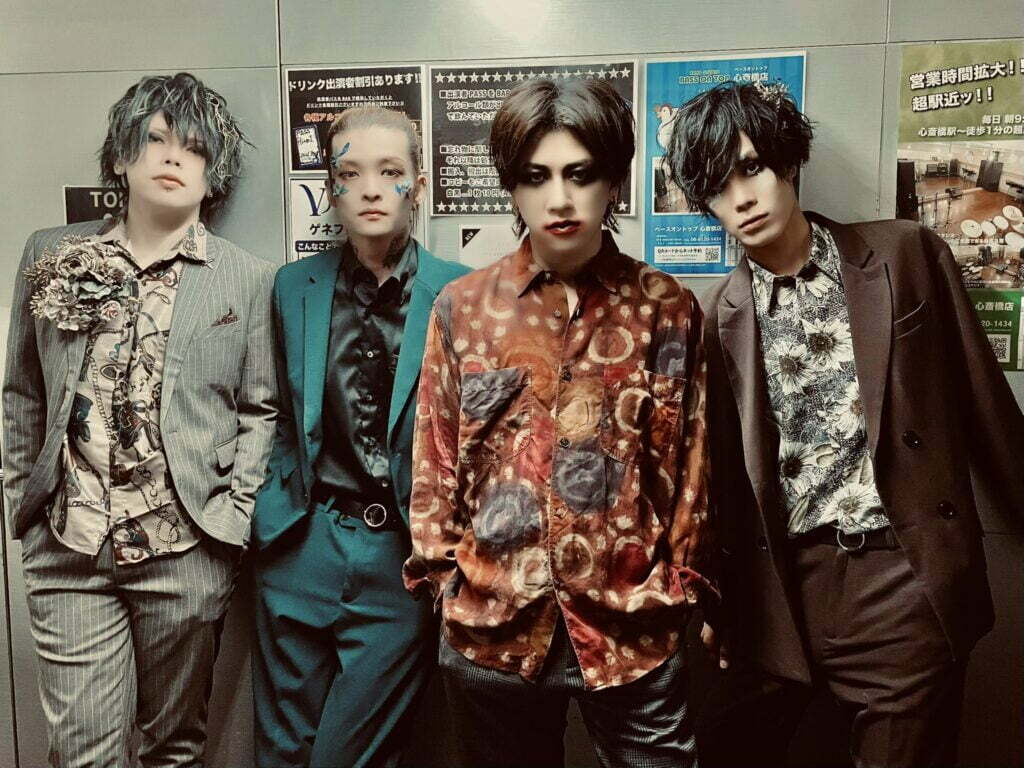 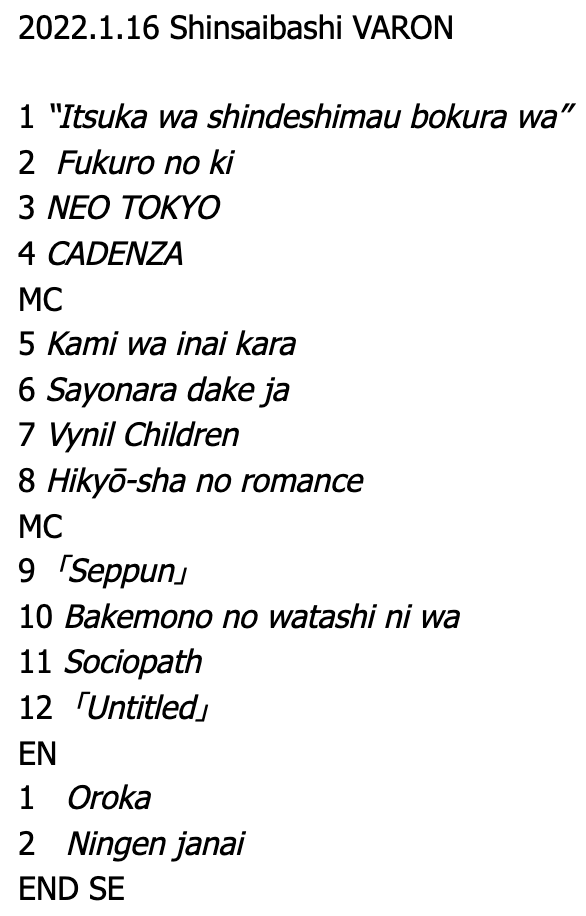 […] close, warm atmosphere between artists and fans. You can check out our mention of it by reading our live report for Fukuro. On the other hand, the Tokyo venue probably also has a sentimental value for NICOLAS, since Meguro […]